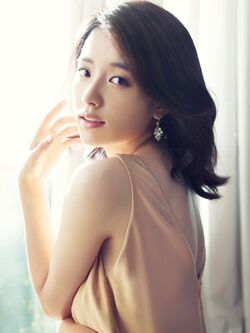 Personality: Very kind and civil. She doesn't like war but only goes into one to bring peace. She takes the leader role if she absolutely has too but rather prefers to be one of the plain people.

Parents meeting: Jun-seo Gangjeon (or Jun) was an immigrant from Korea and resides in America to live a better life. he was very wealthy and famous for being one of the richest Ceos in America. One day, Jun stepped into a bar by himself and saw a woman (Harmonia). She was the most beautiful woman he had ever seen. Jun walked up to her and flirted with her to see if he can pick her up. After a couple of drinks, both were really drunk and Jun brought her to his house. He brought her to his room and since both were drunk, they made love. But the next day, she was gone as if everything was a dream. After a few days, Jun saw a baby on his door step. And a letter with it too. The letter said that it was his baby and with it, two gold bangles that could change into hook swords (he didn't know that part though). Jun reluctantly took care of Sarah even though he didn't want to.

Childhood: Sarah's childhood was very unpleasant. She never received any love from her father nor any signs that he cared for her. There were many times she wanted to run away but she couldn't because she knew that if she did, she'll die out there. Sarah went to an all girl's private school. She was very popular for being very nice and all. Sarah loved to sing as well. She had high dreams of becoming a singer but they always crumbled when her dad said that she couldn't do it since many others were also trying to get to the top.

Monster attack: When Sarah was 13, she was going home one day and a hellhound attacked her. A satyr, who was her protector, came up to help her defeat the hellhound. A woman's voice in her head (Harmonia) told her to use the bangles as a weapon. When she took them off, they turned into celestial bronze twin hooked swords and she used them to cut up the hellhound. After a couple of minutes, the hellhound disintegrated. The satyr then told her who she really was. Sarah was refusing to believe that she was half-god but after the hellhound incident, it made her get a reality check. The satyr then lead her to camp. But after 3 months, she decided to go back because she knows that school is important too.

monster attack aftermath: Sarah continued life as if nothing happened to her. She went to school, did homework, went back home, got yelled at her dad plenty of times etc... At age 14, she had another monster attack but thanks to those 3 months of training all the time in camp, she easily defeated the hellhound that attacked her. When she turned 15, she was walking back home but a flock of harpies spotted her. She thought she could fight them all but she only disintegrated about three before she got plenty of cuts, scratches, and bruises. A demigod suddenly came in and helped her. After all of the harpies disintegrated, the demigod guided her to camp. Luckily, they got to camp with no monster attacks but they parted ways once the whole journey was over as if nothing happened. They parted ways as if the other demigod left camp because he got tired of staying at camp. ("tired" meaning he's tired of trying to live and train. he wanted to be a normal person)

Note: i feel like something is wrong with this claim. if you find it, please tell me.

Demigods usually go missing all the time, so I don't think there's need for a quest. But wouldn't she have told the camp she would go back?

Riri Where the clouds are swimming? ❤ Special:EditCount/Riri25

she didn't bother to think about telling the camp because she thought there was no need and just left. and ill change that part about the quest.

Pandora Shouldn't a demigod traveling back from a quest be a team, a pack of questors?There is a crime, but no criminal. ★❣Broken❣★

ah that is true. ill change it so that hes traveling back to camp because he was putting his family in danger.

I just got confused with the demigod. Um so they went back to camp together and parted ways? By parted ways you mean like they stayed at camp but never talked to each other or Sarah stayed at camp while the other one left?

parted ways as in Sarah stayed in camp while the other demigod left because he got tired of staying at camp. (he's tired of trying to live and train... he wants to be a normal person)

Retrieved from "https://camphalfbloodroleplay.fandom.com/wiki/Claiming:Camp/Ho_Sook_Ganjeon?oldid=1217811"
Community content is available under CC-BY-SA unless otherwise noted.