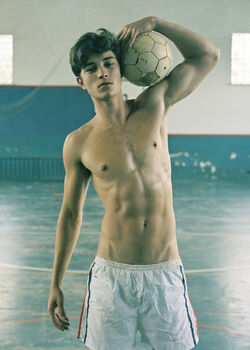 Personality: Jack is a shy, not really talkative person. Though if you come to know him, he's kind and funny. He is also kind of a dick, when it comes to it. He doesn't like to talk and get easily embarrassed

History: On a cold, Decembers day. Anna was working at a bar, in Oxford, England. A man, under the name of Logan Clocker. Logan began to flirt with Anna in the first second they met. After some hours of talking they both retired to Anna's flat. That morning, when Anna woke, Logan was gone. She was pretty pissed about this, but she carried on with her life.

9 months later, Jack was born. Later that year Anna and Jack moved to Cheltenham, England. Here he grew up with his mother. Anna got a job cleaning houses, this didn't pay well but it kept them just above the bread line with Benefits from the Government.

After another year of this, his mother was fired from a lot of the houses who because she was stealing from the houses. This made his mother very sad, and she later became an alcoholic. When Jack was 5, he was taken away from his mother by Social Services. He was then put in a foster home. Jack was never adopted.

At age 9, Jack became an amazing pick pocket, stealing peoples money in town and on the streets. He would always know, where is targets where going and what would happen next. When he was 10, he was walking down a side ally, after a hard days work. A large dog came from the shadows, it charged at him. Jack froze in fear, at the last second before the dogs jaws clamped around Jack a figure from the shadow, he dropped his large hammer onto the dog and it burst into dust. All this time, Jack was closing his eyes and whimpering. When he opened them, the dog was gone. The guy said that it was just a stray dog, and that it had run away. He also said that he had been observing Jack, and that he wanted him to join his gang. Jack happily excepted

When Jack was 12, he was attacked by a man in a large coat. This man chased Jack down ally's at streets. Because of Jack's speed and knowladge of the city and it's maze like streets, he very quickly left the monster far behind him. The man ran past him, swearing aloud in Greek. When Jack was much older, he was abused by the leader of the gang, Peter Taylor. He would beat Jack for no reason and attack him.

When Jack was 16 he was given a plane ticket by an anonymous person, this came in the mail at Jack's birthday. With it came a letter, it told him to go on the plane and go to Camp Half-Blood, Half-Blood Hill, Farm Road 3.141, Long Island, New York 11954. The latter also explained that Jack's father was a Greek God and that all of the old myths where true. Later that day, he took only a small suit case and went on the plane to the USA

He was put in a home like a foster home? And then he lived with them while in the gang? Sticks wouldn't hurt a monster, or make it  give up. How did Jack get the ticket? Who sent it?

Okay, I've changed the gang thing.And yes, he sorta lived with the gang. But was more of a hang out thing on weekends and after school. The Letter came from an anonymous person/s. Most probebly a satur or even hi father

I'm not sure how effective hiding would be, as monsters can smell demigods. And why didn't the satyr just come and get Jack? if it's his father, why didn't he explain first?

Why didn't his mom just send him to day care instead of taking him with her? The camp wouldn't send a letter it would send a satyr to fetch him.

He didn't go to day care as, his mother didn't have enough money to pay for it. And the letter wasn't from Camp, it was from his father LeGruff

Why would she let a three year old run around someone else's house unsupervised? I mean three year olds in general will pretty much, touch, destroy, eat, put in their mouths, just about anything. It is entirely unrealistic that she'd take the kid with her and let them run wild in a stranger's home. My grandmother cleaned houses when I was growing up, so I know how it works

Okay, thanks. I've changed it so that there always be in the same room.

Still makes no sense, he's three years old, of course he's going to wreak havoc, the people she cleans for wouldn't tolerate her having a three year old there to begin with. They wouldn't consider what he did even stealing, its not like a 3 year old is smart enough to take things and what, stick them in their diaper, he's not Stewie and this isn't Family Guy, he's a three year old.

This claim has been approved as a child of Prometheus. You now need to make a page for them and a word bubble, if you aren't sure how to do this you can see the guide here. Once you have done that you can add your character's name to the cabin list located on the cabin pages and start role playing with your new character. If you have any questions feel free to ask a member of the Admin team.

Retrieved from "https://camphalfbloodroleplay.fandom.com/wiki/Claiming:Camp/Jack_O%27Brien?oldid=1223828"
Community content is available under CC-BY-SA unless otherwise noted.