Personality: Jack is mute, cursed by Nemesis for saying her and revenge meant nothing. However Iris went to Hecate for help, who managed to make Jack be able to at least speak to his twin brother. Jack is outgoing and has high standards of things, but can be a kind person once you get to know him. He is very different from his brother, Jack is more mature and acts like the older sibling. Jack has OCD, which can make things difficult for him. Jack also has an obesession with Photography. No matter how bad things get for him though, he will always be there for his brother Echo. 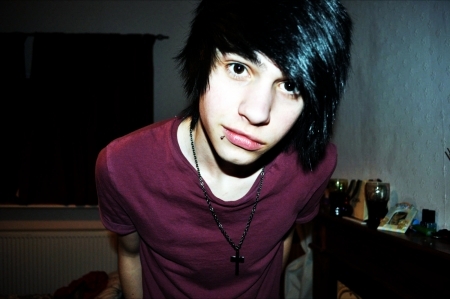 Weapons:He has a Cross necklace which, when you twist the cross, can turn into a sword. 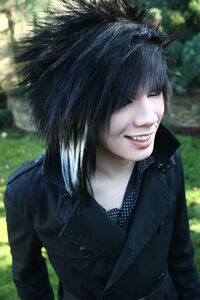 Personality:Echo is well.....where do we start, Echo is very dirty minded and perverted, otherwise known as having a "gutter mind". He's quite vain and self obsessive, but never quite thinks that he's good enough. He feels as though he doesn't deserve anything or anyone

Echo loves his hair and doesn't let anyone else touch it so he cuts it himself. He loves the colour purple almost as much as he loves cars and his electronics. But above all the thing he loves most is his twin brother Jack, while to two might have they're ups and downs they've remained close for 18 years.

Echo suffers from both Echolalia and Insomnia. He is Bisexual but prefers guys to girls.

Weapons:A kick-ass Rubix-cube which turns into a boomerang when threw, as well as being a normal....Rubix-cube, it also turns into a cool storage thingy when solved, currently inside it however is Jack, his brother's, voice.

History: Jack and Echo were born to Jayson Rivera and Iris on the 6th January 1994. Their parents met at a street party and she said that she was new to the town and would like to have a tour. Jayson accepted her invitation and soon realized there was a click between them. On their tour around the town the two stopped at a little coffee shoppe. The two bonded over hot chocolate and cupcakes.

The two started seeing more of each other and it wasn't until a few months later the two fell in love. A few months later Iris discovered she was pregnant, with twins. Jayson was overjoyed but Iris knew that soon she would have to leave. Once Jack and Echo were born, Iris left, leaving Jayson heartbroken.

It wasn't until one day their beloved grandmother came home early from shopping that they're grandfather was found out. Their grandmother, shocked, quickly called the police to saw that he was abusing their grandchildren. From this moment on she never let the boys out of her sight again. Jack was fine with this but Echo was not, Echo felt imprisoned. One night he escaped. Jack obviously worried followed him, however, as soon as he caught up with him they got attacked by a harpy.

The two twins ran away from the harpy before it could actually see them. They reached their grandmother's house and banged on the door. Their grandmother sighed and told them off, then see remembered what Jayson, her son and the twins' father, had told her about Camp Half Blood and their mother being a goddess. She told the boys to get their stuff and get into the car, the boys did as they were told and got into the car. As they were driving to Camp their grandmother fell asleep and the car crashed into a tree and flipped over. The boys had only a few cuts and bruises, however their grandmother had sadly died.

They had no choice but to head back home, where they went back to their father. Jack managed to deal with this a bit more better than Echo, who couldn't stop grieving over their grandma's death. There father was shocked to see them and let them in. Jack asked if they could stay with him for a while, their father accepted and told them they could sleep on the couch with the dog.

One day Jack and Echo came home from school, of course they had been bullied. Echo suggested revenge but Jack said revenge was for the weak. Nemesis saw this and was mad so took away Jack's power of speech and put his voice in the closest thing to him, his brother's rubic cube. As the rubic cube was Echo's he could hear his brother's voice while everyone else couldn't. Iris was mad at Nemesis for taking away her son's voice and asked Hecate if she could reverse the effects. However it didn't work, the only thing she was able to do was make Echo repeat everything his brother says to him.

Time passed and Echo asked his father if they could go to the camp their grandmother had talked about. Their father agreed as having two 16 year olds in his house, especially one mute, we driving him crazy. So he took them to camp, where they now reside. Hold my heart it's beating for you anyway. 14:33, July 8, 2012 (UTC)

Amended to thte 14th, it must be finished by then.

Don't forget, you only have 1 more day to finish this

This claim has been approved as children of Iris. You now need to make a page for them and a word bubble, if you aren't sure how to do this you can see the guide here. Once you have done that you can add your character's name to the cabin list located on the cabin pages and start role playing with your new character. If you have any questions feel free to ask a member of the Admin team.

Retrieved from "https://camphalfbloodroleplay.fandom.com/wiki/Claiming:Camp/Jack_and_Echo_Rivera?oldid=1792632"
Community content is available under CC-BY-SA unless otherwise noted.