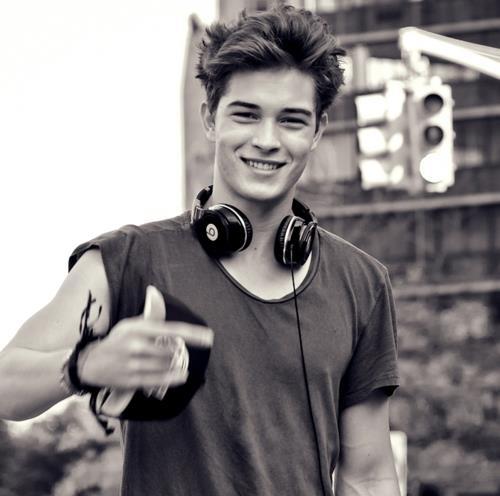 Personality: Jamie is friendly and sweet. He likes flirting with girls, but respects their boundaries and would never do something rash. He is brave and likes to try new things, but when he is asked to do something he doesn't want to do, he will not do it. Jamie loves to play guitar and sing, and sometimes wishes Apollo was his godly parent.

"When I was young, only twenty five years old, I met your mother on a beach in London, where I was studying. She was the most beautiful women I had ever met," My dad starts, like he always does.

"How beautiful?" I ask, even though I've heard this story a million times.

"Too beautiful too describe. Anyways, I saw her standing there and immediately walked up to her. 'You are the most beautiful women I have ever seen,' I told her. I'm not sure where my courage came from, but I knew I had to get her to notice me." He smiles, like the memory was sweet. "Surprisingly, she answered me."

"Be patient, son." My father coaxed me back into a lying position and continued the story. "I don't remember exactly what she said, but one thing led to another." Seeing my confused expression, he smiled and said, "When you're older."

Of course, that response did not satisfy eight-year-old me, but no matter how much pestering, all I got was "When you're older" or "Later, later". Finally, he continued the story.

"Anyways, your mother left. She had work to do over-seas. I never saw her again," This time, his expression turned wistful. I was always impatient because he always paused for too long and I had to wait a minute before he got on to my favorite part.

"And?" I prompt, trying to sit up again.

My dad pushed me back and said, "I won't continue unless you settle down," Which always made me calm down.

"A little less than a year later, when I walked outside to get the daily mail, I was stopped by a basket on the doorstep. I peered inside and was shocked to find a chubby baby boy!" At this, he tickled my stomach.

"I was not chubby!" I say while laughing.

"There was a note attached to your blanket." He closed his eyes and I always assumed he was remembering what the note read. "It read... 'My dear Patrick, this is our child. I am sorry I cannot see him grow, but I know you will do the right thing. When the boy is of age, someone will come and take him where he is needed."

"It means that when you're old enough, you have to move out and start your job," My dad answers. It wasn't exactly true, but close enough.

"Now go to sleep, Jamie. You have school tomorrow." He kisses my forhead and tucks me in.

It never occured to me that my mom was a Greek goddess. I mean, hey, who just suddenly thinks, "Wow, my mom must be the goddess of love because I appeared at my dad's doorstep"? Not me, anyways.

Besides the fact that my dad was the only one who raised me, and I was dyslexic, I lived a pretty normal childhood, up until I was about twelve. That was also the year my dad started being really parinoid. Especially on my birthday. He'd always look at the door like he was excpecting someone to come, and he didn't want him to. Looking back now, I realize he probably didn't want the person my mom was talking about in the note to come take me away. Probably wasn't the best idea keeping me away from the only place really safe for me, Dad.

The year I turned twelve was big for me individually. I was going to middle school, I got my braces off, my voice finally got lower. It was also the year when the monsters started attacking me. At the time, I didn't know they were monsters. I didn't even know they were targeting me at all until the fatal (cue dramamtic music) day I was brought to Camp.

My first monster attack was when I was twelve (yipee). I think I was walking home from school when I saw this humungous rabid dog thingy just sorta like emerge from the shadows. Not my proudest moment, but I screamed like a little girl (despite my new found deep voice) and ran away. There was no way I would be able to out-run that thing though. Just as it was about to close in on me, I grabbed a stick and stuck it in it's eye. Ew. Anyways, it started howling and barking, so I ran home. Not the biggest fan of dogs to this day, even though I know now it was a hellhound. That wasn't the first time something like that happened to me. When I was thirteen, a large bird-like animal started cawing at me. It dove at me with it's talens sharp. I instinctivly put my backpack between me and the animal. Strangely enough, it happened to get it's talens stuck in the cloth. I sprinted away, stopping only to throw a large rock at it to by me some time.

It wasn't only attacks. That same year, I constantly felt as if I was being watched, yet when I turned around, I was alone. I walked past a nearby store, and the window just shattered, and so on.

I decided to tell my dad about these occurances. When I did, his face turned paper white and asked me all serious-like to tell him if something like that ever happened again. Judging from his scared expression, it was something bad, so I didn't tell him of the strange animals that seemed to be targeting me. Not exactly my smartest move.

Anyhow, the older I got, the more often the weird stuff happened. Luckily, I wasn't attacked by another monster until the night I was brought to Camp.

It was my fifteenth birthday. I was hanging out with my best friend, Alexandra. Alexandra was intresting. She told me that sometimes, she felt like she was being watched too. She also told me of strange animals that seemed to be targeting her. Suddenly, there was a huge bang outside. Both of looked out the window, and we saw a big horse of some kind. That wasn't the worst of it.

To our horror, it opened it's mouth and BOOM! A hot colum of fire shot out of his mouth, melting the window. Both of us screamed and ran back. The animal stampeded in, shooting another colum of fire at Alexandra. I instinctivly tried to cover her body with mine, but I was too slow. The monster's (ha, the iorny) fire engulfed her with flames. I couldn't look.

Just as I was about to go to her, the horse monster turned to me. I screamed and tried to run, but he had cornered me. I closed my eyes, waiting for end.

It never happened. Instead, he exploded in a shower of golden dust. A guy stood behind the pile. He was wearing an orange Camp shirt, and had extremely hairy legs. When I looked down even more, he had... hooves for feet? I suddenly remembered Alexandra, and I turned to her. The sheep man suddenly grabbed my arm. "Hurry! There will be more monsters coming soon. We have to go."

"Your friend is too far gone. She was a demigod also. She has that smell," He said, trying to pull me.

That was when I blacked out.

When I woke up, I was laying on a bed. I looked at a poster, and it read, 'Camp Half Blood Infirmary'

Weapons: Celestial bronze sword that can shrink accordingly - He got the sword at the armory

I've been fighting so long, but I've lost your war and our kingdom is gone ~ Strawberrywaters.

Retrieved from "https://camphalfbloodroleplay.fandom.com/wiki/Claiming:Camp/Jamie_Dylan_Smith?oldid=1495864"
Community content is available under CC-BY-SA unless otherwise noted.