NOTE: This character is a flower nymph 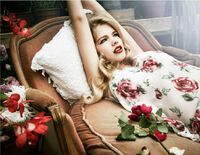 Personality: Joli is the type of girl who love nature.She loves flowers and she objects against people cutting down forests.You could say that she is a hippe sometimes, but Joli just loves nature and everything about it.She also loves music and she's very cautious of people and their actions.Joli's favorite flower is also the rose and you will see her wear a lot of outfits involving roses, or even a rose in her hair.

History: I was born as Angelique Smith, daughter of two mortals who were very rich and famous moviestars and I was a mortal who could see through the mist.I loved my life.I knew about the monsters, the demigods, the gods, and everything.I was also friends with a demigod.Me and him had started a relationship, and me and him loved each other very, very much.His name was Finn Parkers, and he was the love of my life.

Of course though, Finn had to leave every summer, since he wasn't a year-rounder at camp.He did write letters to me, but eventually, he stopped writing letters to me and you could say I became...worried.The days turned into weeks, and the weeks turned into months.When it was time for him to leave, he never came back home.I was worried naturally like any other girlfriend would be.So, I decided to go to Camp Half-Blood to see if I could find him.

Finn had a satyr friend and I asked him to take me to camp, and he did.When we got there, I was in for a surprise.I found out Finn had left camp two weeks after his arrival, and not only that, but he joined the Broken Covenant.I was upset and I cried.I couldn't believe Finn had betrayed camp like that.And not only that, but he-okay sorry.Getting ahead of myself there.

I was let into camp and me and the satyr walked into the forest.He comforted me while I was still crying over Finn leaving me.Just then, Finn emerged from the shadows, with a sword pointed at me.I soon was angry.I knew all about celestial bronze, but it didn't look like celestial bronze to me.I then saw that it wasn't a sword, but a dagger.A silver one.Finn then gutted me and he left me there to die.He also killed the satyr too.I was dying and Finn's parent, Persephone, felt pity on me for her son doing that.She turned me into a flower nymph and she tied me to my favorite flower: to a rose bush to be exact.So I guess you could say I'm a rose nymph sort of.

You have to make sure you fill out an actual character for this Finn character. You can't just decide a character is in the BC. Windsword7

This claim has been approved as flower nymph. You now need to make a page for them and a word bubble, if you aren't sure how to do this you can see the guide here. Once you have done that you can add your character's name to the cabin list located on the cabin pages and start role playing with your new character. If you have any questions feel free to ask a member of the Admin team.

Retrieved from "https://camphalfbloodroleplay.fandom.com/wiki/Claiming:Camp/Joli?oldid=1651562"
Community content is available under CC-BY-SA unless otherwise noted.