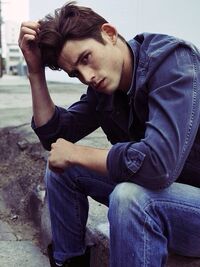 Personality: Does not open up to people very well due to some history issues. Kind of socially impaired when it comes to meeting new people, can come on too strong in an aggressive kind of way. He seldom smiles at jokes, but his heart opens up to those of good intentions and heart.

History: Most children have bedtime stories and favorite movies, yeah? Even little Jonah Fremont who grew up in a wee little house on the coast of South Carolina, United States. His favorite movie was Sharkboy and Lavagirl, an old classic that his mother introduced to him when he was five-years-old. His favorite bedtime story was a totally different plot, whom he begged his mother to tell him almost every night since the first time she told it to him. Jonah believed it to be a story of adventure and danger and myths, but his mother, Alexa Fremont, knew that it was in fact a romance story. Switching out names, Alexa told her son the story behind his birth.

It started with a rather nasty bar fight started by a rowdy group of three who were mouthing off everyone within hearing distance. This included, Alexa who at the moment was a hotheaded college student drinking with friends because exams had ended and summer had begun. Her friends had stumbled out drunkenly before the fight had begun and it did not end well... For them. By the time she had won, Alexa had bruised knuckles, dark spots over her body and a deadly headache. How she won? Her dad was an ex-boxer and her mom a personal trainer. Alexa didn't have the body of a muscle beast, but she was very fit indeed.

Trying to make her way back to her apartment, she ended up on a beach coast, passed out. Nearby hammerheads smelled her delicious, rich blood and were about to have a midnight snack when Palaemon stopped them and told them, "Not this one." He was there at the bar, just taking a godly break, when she had defended herself from the harsh words of the cocky boys who had started it. With good intentions, he took her car keys and from her pocket and checked her driver's license to find out her address. Palaemon admired her courage and drove her back home.

When Alexa woke up, her face was clean and her knuckles washed. Palaemon was there and told her what happened last night. Albeit, she was reluctant to have a stranger in her home and trust his words, but she thanked him nonetheless. Alexa asked for his name and he gave her a fake one of course. Building on their first encounter, they began to date.

Palaemon filled her head with lies about who he was until Alexa told him she was pregnant. This was right before Alexa finished her last year at college. He left a note in her apartment explaining why he couldn’t stay. Heartbroken, Alexa continued to live life alone. Except for her best friend Emmett. He was a son of Apollo and helped Alexa through her pregnancy. They even began to live together after they graduated.

Alexa followed mother’s footsteps and became a personal trainer at one of the gyms. Meanwhile, Emmett got a job as a waiter at one of the high end restaurants downtown. Their relationship stayed platonic and friendly, neither asked for more.

However, when Jonah turned five, Emmett began to feel the godliness emit from the toddler. Because of this, Emmett questioned Alexa about who the father was. She had told him before that it was just a jerk of a boyfriend who didn’t want commitment. She got nervous and even raised her voice a little, but Emmett calmed her down and told her about his family. How he was a demigod as well.

This did come as a shock to Alexa but soon she adopted the idea. Daily life resumed its routine, but Emmett was on his toes now. He wanted to protect Jonah as his own. He and Alexa raised the child together and it was starting to feel like a family.

Their family bond grew stronger when they were attacked one night after dinner. Jonah was only seven. Walking home through an alleyway shortcut, they were attacked by a harpy. Luckily, their house was nearby. They sprinted to the front door. Emmett shut the door and sharp claws raked down the door.

Emmett raced to the garage through the house to get his old bow and arrow set. Then shrieks and bangs were heard on the metal garage door. The monster could smell Emmett, needing to eat and kill. He ran back to the door and opened it. Unfortunately it was already making its way back to the front door, following Emmett's scent, but he got the best of the creature and shot the harpy at a remarkably short distance.

But because of momentum, the harpy landed on Emmett with its claws outstretched, tearing through his shirt and scratching his chest. Unfortunately, what Alexa saw was a hawk instead of a harpy; she couldn't see through the mist. It took a while for Alexa and Jonah to haul the harpy off of Emmett, but even longer to help him into the house and onto the bed.

The injuries weren't fatal, but they were bad. Emmett couldn't work for a while so Alexa took over his job as well despite her best friend's protests. Jonah didn't see his mom very often for a month with school and her double shifts so when Emmett recovered Jonah was determined to spend more time with his mom.

Alexa took her son as his prodige at the gym. It started with doing sit ups and teaching him how to do proper push-ups, but as Jonah grew he began to do more and learn more. His mom never really explained what happened that night when Emmett got hurt, but he learned soon enough. He wanted to protect their little family as well despite being so young.

The confidence was short-lived. It was Thanksgiving night. Since everyone in town was at home and Jonah's family finished dinner early, they decided to go on a walk through town. It was nearly deserted, barely walked passed a single person that night. Maybe not people, but they encountered other creatures. Emmett had just finished telling a joke when a harpy tackled Alexa from behind, tearing out her flesh.

He woke up with Emmett by his side. His eyes were bloodshot and he hadn't slept for two days. Emmett explained to Jonah that his mother was killed in the attack, but not as harshly as the harpy because it wasn't Emmett who killed the monster, it was Jonah. Being a child of Palaemon, Jonah had tapped into his shark instincts and had lost his self control because of his anger and sorrow. He had no recollection of the previous night so it came as a shock to Jonah who was only eleven-years-old.

The next days, months, years were harsh. He never had the inclination to explore the world of his monsters that killed his mother nor the demiogds and gods that came with it. Jonah became his own personal trainer and joined the Junior Varsity football team as a freshman when he was thirteen. He looked just like his mother now that he had grown up. He was a bit brooding, but on occasions like winning games he opened up a little. Never even looked at girls or guys romantically either.

Emmett had been the only one there for Jonah because Emmett was the only one he let in. He told Jonah the identity of his real father the week after that night. Emmett wanted to make sure Jonah didn't die because of some random bird. It wasn't healthy to be so angry and hurt, but Emmett let Jonah take his anger out during football, fencing and boxing. By the time Jonah was fifteen, he was better. He got some friends, but they weren't too close.

He had other harpies attack him through his four years of healing. It was during these times that Jonah was able to develop his powers and became stronger as a demigod. Luckily for the first few attacks, Emmett was there to aid Jonah in fighting them off. After about the fourth attack, Emmett gave Jonah a Celestial Bronze sword to defend himself using his fencing skills against the harpies.

After about the fifteenth attack, Emmett became a bit worried when Jonah started to display an aggravated attitude. He was getting tired of being alert every second so Emmett told Jonah about Camp Half-Blood. Emmett had grown up there as a kid to a teenager and left when he turned eighteen to attend college. Wanting to leave his harpy infested neighborhood despite his resentment to join Emmett and his father's world, Jonah asked Emmett if he could accompany him to Camp Half-Blood after two weeks of thinking. Jonah loved his "father" despite not being blood related.

However much they loved each other, they both thought it was for the best for Jonah to leave the town for summers. Upon their arrival at the New York airport, Emmett got a rental car to drive Jonah to the entrance to Camp Half-Blood. There they said their goodbyes and man hugged. No tears shed (almost).

is this claim done???

Hi Lumos, I'll be checking your claim today! It looks good so far, I really like Jonah's story. I'm assuming that Emmett went to camp or had a type of training because otherwise I think he would easily finish a harpy. Also please clarify if Alexa was a clear-sighted mortal and also wasn't Jonah curious at his demigod life because he witnessed his mother dying and also when the harpy attacked Emmett.

This claim has been approved as a son of Palaemon. You now need to make a page for them and a word bubble, if you aren't sure how to do this you can see the guide here. Once you have done that you can add your character's name to the cabin list located on the cabin pages and start role playing with your new character. If you have any questions feel free to ask a member of the Admin team.

Retrieved from "https://camphalfbloodroleplay.fandom.com/wiki/Claiming:Camp/Jonah_Fremont?oldid=1609771"
Community content is available under CC-BY-SA unless otherwise noted.