Sometimes we chase after something for so long, we don't know what we'll do once we catch it. 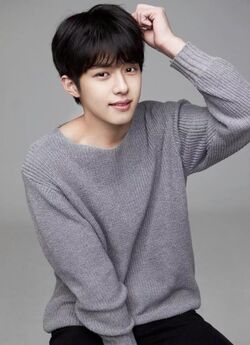 Joshua Yeo is someone with a serious heartache problem. Because of his mother's anti-love choices when she was young, Aphrodite became miffed and cursed not only his mother but him as well. For as long as Joshua never found his 'true love', he would feel a chronic heartache in his chest, not too painful to be life threatening but enough to be a constant thorn on his side. Joshua has never been the one to fall easily, nor was he one to look for love, so for all his 21 years of living the ache has become a constant in his life. He doesn't really pay any mind to it anymore but he does wonder what it feels like having a heart that isn't constantly looking for a perfect other half.

To deal with his curse, Joshua has taken to random little hobbies that would keep his mind preoccupied from the ache, including but not limited to legitimately time consuming activities like painting, reading, etc. and small distracting tics like toying with a random rock, tangling and untangling pipe cleaners etc. Thus, Joshua's mind has never been at peace because of his heart's curse.

Other than his chronic heartache, Joshua's a pretty simple guy. His mother raised him to be someone considerate, tolerant, understanding, and sympathetic, basically a decent human being. He doesn't have his mother's pessimistic view on love, but he does have her naturally pessimistic view to everything else. For all his polite smiles and manners, Joshua's view on the world is bleak. He tends to just accept whatever is thrown at him and adjust accordingly. Joshua never felt the need to fight for anything, mostly because he never had the reason to, until his mother's death of course. That's when he felt the need to fight for his own survival, and he did.

Joshua is incredibly self-sufficient and independent. He never once leaned on anyone for anything, being taught at a young age that if he knew how to survive on his own, then he should. He's clever, resourceful, diligent and determined, everything his mother wanted him to be. When his mother died, he only mourned for as long as necessary and focused on getting himself back on his feet, a testament to how strong his will is.

As passive as he may be, when Joshua feels pure emotion, he feels them strongly. He's way more emotional than he lets on with only his sheer willpower holding back most of the onslaught. When Joshua's genuinely happy, he's esctatic and his happiness could rival the brightness of the sun. When he's angry, he'll be in a rage, his fury rivalling that of his own father's storms. Joshua doesn't like how emotional he is, but he was born that way so he can't really do anything about it.

Yeo Jin-Ri had long since decided that love is a mistake.

As a child, her father loved her. Love felt nice, warm, comforting. But for all her father's love was worth, it was clear that her mother never loved her. For as long as Jinri remembered, she never saw her mother act, well, motherly towards her. Even as a child she could practically feel the ice in her mother's gaze. 'A mistake', she called Jinri during a shouting match with her father that lasted well until morning. If a child was the product of the love between two people, then does that mean Jinri was a product of a mistake?

“No, no. You're the best gift a father could ever ask for.”

She doubts it. Or, well, she didn't until that hideous flaming horse came. She was 15 then.

Is she? How 'special' was she to have her father send her away to the other side of the globe the moment he was given an excuse to?

At least she found out a lot of things at Camp, like how her 'mother' really wasn't her mother at all, it's someone called Aphrodite (Explains why her father's ex-wife hated her so much.), and how the rest of the mythical world is out to get people like her so she should stay within the camp's borders. Jinri doesn't know how to feel about her siblings, or the rest of camp, but she has nowhere to go so she stays.

Jinri doesn't know what has become of her father during her 6 years at camp (he never came to pick her up when summer ended, each year, and he didn't send letters either even though he promised to), but she knows she fits in well, or as well as she could be fitted in. Even with her rowdy circle of friends and half-siblings, Jinri feels something missing in her core. She knows what it is, but love always had negative connotations to her. What she feels for her friends, she doesn't call it love. She calls it a sense of camaraderie. All the people she claimed to have loved left her alone. Jinri didn't want them to leave her alone.

Jinri promised to never love anyone ever again. It's dramatic, a bit childish, and a lot foolish, since she lived in a world where someone like Aphrodite exists and is her biological mother. Having someone reject love, that someone being her own daughter no less, really pissed the goddess of love off. A child of the goddess of love herself rejecting love? It was absolutely humiliating!!!1!!!one Seeing this as her own child misbehaving, Aphrodite just knew the trick to put her daughter in her place.

At 21 years of age, Jinri crossed the borders of camp for the first time in 6 years to pursue a college degree, wanting to leave behind the world of Greek mythology and live a life as normal as possible. She didn't think of South Korea, where her father might be, how he might be... Instead, she built a new life of her own. Jinri goes through her college life, excelling in her studies, making new friends, just enjoying the feeling of her mundane life.

Then, during a senior party, she meets him. He was beautiful beyond any mortal sense, Jinri was sure he wasn't even a mortal at all. But there was something burning under her skin, the feeling of want like she never felt before. This was love, she marvelled as they talked through the night, as she lost herself to him. (In the back of her mind, she wonders if this was Aphrodite's doing, because Jinri was sure she never would've felt this way otherwise...)

The morning after, she's in her dorm with an ache in her body, an even more pailful ache in her heart, and a letter of apology from the man she laid with the previous night, Notus. She was right, love was a mistake. Love was a mistake, she chanted in her mind as she clawed at her heart, desperate for the ache to stop, to go away. Later on a fellow camper and classmate would explain to her that the ache was a curse from her mother Aphrodite, apparently for Jinri's rejection of love from her life. Typical, Jinri thinks. She never did have any high regards for her mother, no matter what her half siblings said.

Nine months later, Joshua Hyun-Bin Yeo was born. Gazing at her child for the first time, Jinri still decided that what she felt for the newborn wasn't love, instead it was maternal care and instinct. Love is synonimous with mistakes. Jinri might've viewed her child's father as a mistake, but her child will never be a mistake. Maybe this was what her father might've felt when he first got her, but Jinri was adamant on never making the same mistake as her father did.

Joshua was raised by his mother well. At a young age, he already knew how to be independent. Jinri taught him how to stand on his own two legs, looking after him well and offering guidance when he needed it. She laid out the instructions, gave him the tools and let him figure out the rest. He was also taught of his heritage, of who his real father was and how his heritage will throw him into a life of a constant fight for survival. Jinri originally planned to start training him when he turned 10, planning on , but 8 year old Joshua wanted to make sure he could defend himself when his mother wasn't around.

From then on, Jinri personally trained her son everything she learnt from Camp. The training paid off during Joshua's first monster attack when he helped fend off several Stymphalian birds with his mother. Jinri decided to not let him go to camp just yet because she wasn't finished teaching him everything he knew.

The only thing Jinri was worried about was Joshua's curse. Aphrodite was petty enough to have Jinri's son suffer the ache of longing for a perfect other half for the rest of his life. Jinri knows how much of a pain in the behind the curse was so she taught Joshua how to deal with it: to keep himself distracted. As long as his mind was preoccupied, he could go on with his life without agonising over the ache.

Everything fell apart by the time Joshua was 17. Iroically, it wasn't caused by a monster attack. Rather, it was caused by a very, very horrible accident. It's kind of a poetic justice. Jinri came into this world because of an accident, she'd also leave the world because of an accident. Because of his young age and miniscule wealth compared to the owner of the car that took his mother's life, Joshua wasn't able to do anything against the people who took his mother away from him.

After his mother's burial, Joshua gathered everything he would need; food, clothes, money, and his mother's weapons then he set off in direction of the camp his mother had grown up in. The first few months in, he was fine. He lived off whatever he had at the moment and fought off any monsters he encountered along the way. Then his food ran out, his money followed long after. Joshua began to feel desparation and started to try and pickpocket people. He wasn't a son of Hermes so his first few tries were disastrous. But soon he began to get the hang of it, collecting just enough for a meal to get him through the day.

As months passed on, he picked up several more skills while on the streets, gaining enough experience to actively fight off the few people who would try to, well, fight him for whatever reason. By the time he turned 20, his journey had ended. He was at Camp Half-Blood. The next step: figure out how to undo his curse.

P.S. Would you want to have a new category page?

I don't know why you're doing this; he's such a cutie! (poor cinnamon roll)

This claim has been approved as a son of Notus. You now need to make a page for them and a word bubble, if you aren't sure how to do this you can see the guide here. Once you have done that you can add your character's name to the cabin list located on the cabin pages and start role playing with your new character. If you have any questions feel free to ask a member of the Admin team.

Retrieved from "https://camphalfbloodroleplay.fandom.com/wiki/Claiming:Camp/Joshua_Yeo?oldid=1760519"
Community content is available under CC-BY-SA unless otherwise noted.