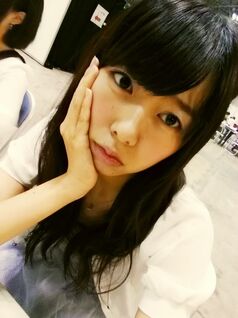 Personality: Easily surprised, light-headed, Trusts people easily, Romantic. She walks around as if she has a world of her own-- not really seeming to mind about other people's opinion about her. Has a naturally kind heart and would rather talk than fight. She also loves spiders. A lot.

Hana was a hot shot model in Osaka, but not one with a clean reputation. She often sleeps around-- sometimes with total strangers even. She went on with her usual work, photo shoots here, advertising there, until she noticed a man that stood out among the rest. He had perfect features. You could say she found herself at the presence of a tall dark stranger. There was a crowd where she was shooting, so hopefully after she's done, she can find a way to talk to him. Being the wild person that she is, she worked her way to him, flirting, chatting, and until finally, she took him home.

When Hana found out she was pregnant- she decided to keep the baby and give birth to her, thus making another decision to finally settle down. She gave up her modelling and instead helps amateur models with their career. She married a simple banker from Tokyo where they settled down in Meguro. Kakuro grew up a peculiar girl-- often spending time outside just watching the clouds, dreaming away. You could say she got that form her father-- her real father. She was home-schooled and at the age of 5-- she had a little half-sister. She would take care of her often because unlike her, her sister was a bit frail and prone to sickness. They had a garden back at homewhere she would lie down and watch the clouds. She didn't have much friends, most likelybecause of her eccentric personality. She made friends, but only a chosen and they stuck with her because they found her interesting.

Things were going well for her until middle school. Things were getting weird. She felt as if— someone was watching her. She was 14 then and she already studied in a private international school. While walking home from school, Kakuro decided to take her usual shortcut, which was through this park. Quiet place, this side of Meguro. Those that live here are those rich enough to buy a house, and the home for the disabled just a few blocks away. There was a kid in a wheelchair behind her, probably one of those who lived at the said institution. Without warning, a stymphalian bird swooped in to attack her. She didn't know how or why-- but out of pure instinct, she dodged out of the way and looked bewildered at what she saw. Was it a bird? no.. It's beak-- bronze. A ROBOT??? Those words ran across her mind before she dodged another attack. She did what she thought would be best. Run. She did run, but it wasn't good enough. There was now a flock of them moving towards her—about 3 more of them, going at a face pace. Her skirt was flying high above her thigh and her shoes weren't meant for running. She tripped and as she turned to face the monster, someone protected her. The boy sitting in the wheelchair earlier wasn't a boy at all-- but instead part animal. He handed her a small dagger and shouted. "Fight!" She did not understand what he meant at all. "Uh-- n--no english! little english!" She replied but he was busy trying to fend off the monster. The satyr made loud noises to distract he birds, giving Kakuro time to stand up. She did not understand what the satyr said but survival instincts told her to fight- and so she did. She did her best with the dagger. She's never really held a knife before, all the more a dagger for that matter. But something inside her was stirring. She felt as if she can take this on-- so the next time the bird swoop down-- she dodged and stabbed it square on the back as she screamed. Good thing there was no one around. The bird made a terrible sound before disintegrating to ash. She also did that to the rest with the help of the mysterious creature. After they were finished, Kakuro dropped to her knees and begged for an explanation. It was impossible for them to understand each other, and so the satyr had an idea. They went back home, the satyr writing in Greek text on a paper instead so she could understand. She let it sink in, she was a demi-god.

Kakuro didn't tell her parents about it. Besides, she's got a sister to think about. She told her parents that she would be going to an American High School in New York—they wanted her to learn English anyways. After all, they were setting her up in the path of business. It took a while but they were convinced, as long as she calls. A promise she made, but not one she would keep. She was warned that they weren't allowed to use gadgets inside camp. With that-- she left for America, when she was 14 years old. After a year inside camp, she had to go back home because of family problems. Her sister is terminally ill and she had to take care of her-- taking care of the monsters along the way as well. It wasn’t easy. Fighting off the monsters by herself, so she was glad when the satyr came back and stayed with her for the time being. During her grandma’s funeral she fought a harpie, and another when she went hiking with her classmates, and more of those bronze, metal-like birds at random, but she conquered the, all. When she was 17 they found a way to cure her sister and so with that, she went back to camp.

Weapons: CB Seax (She got it from th Satyr because he said a dagger wouldn't help much in combat and it is more effective.)

Retrieved from "https://camphalfbloodroleplay.fandom.com/wiki/Claiming:Camp/Kakuro_Tsurii?oldid=1227976"
Community content is available under CC-BY-SA unless otherwise noted.