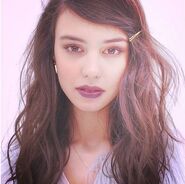 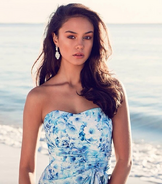 Personality (at least a sentence or two): Being raised by a single, busy father, who would soon get a boyfriend to occupy him, Kalani grew up rebellious and destructive. Her goal being to get her father to pay attention to her. Her insecurity was rooted in the fact that she felt insignificant and lesser to her father's work, love, and pastimes. Ways to deal with it involved building a superiority complex, developing control issues, and finding a way to prove to her father that she's worth a second glance.

Kalani is brazen and controlling. She's quick to get things done, and is sometimes manipulative in her ways.

When she's most vulnerable, she feels small and hurt by the lack of love she suffered from as a child.

History (more than a paragraph):

Gray against the pallor, blue sky. The concrete jungle whirs and cries in an infinite cycle. No beginning nor end. Devoid of any and all organics as the incandescence of the night engulfs it into oblivion. New York. Home to the daughter of secondhand smoke. A pollutant, a betrayer, the dead of the earth.

A home of pride, New York was embellished with an assortment of rainbow decorations for the parade to take place. Zachary Dyer burnt brighter than the lights that lit up the grayed city. He celebrated his pride by drinking, dancing, and kissing pretty boys and girls.

Time slowed and smeared all sense of security when Demeter, who was disguised as another partygoer, caught his eye. She was tall with skin like a porcelain doll and hair that cascaded down her shoulders. The essence of the woodlands right before his eyes. She was out of place in a city where everything was hazed by smog and the artificialness of American life.

This was not her life. She did not belong. Yet she was there - perhaps for him, perhaps to help.

Zach approached her in small, cautious steps. He seemed to weave through the crowd with a naive consideration of pushing someone a bit too harshly. All the while, Demeter looked right at him, doe-eyed. The way she captivated him made her seem more like a huntress than a catch.

The two were quick to hook up and drive off into the roads that led to nowhere and everywhere. Opportunity and complacency. Months later, Demeter would leave a girl named Kalani at Zach's doorstep, and he would soon have a bit too much trouble on his hands.

She made his life hell. On top of working to provide forever, and finding time to care for her, it seemed like she was in no way meaning to facilitate the struggles of raising a child as a single parent. Her cries tore through his mind when she was an infant, and her tiny hands might as well have been puppeted by the devil himself, seeing as she destroyed everything she saw.

Once she started school, she exceeded in studies, but made a stand against anyone who tried to assert authority over her. She refused to follow orders, answer questions, and apologize. Rebelling in a time too free to cry out. Her father would be at school talking with teachers when he wasn't working as an attorney.

After behavioral therapy and a lot of scripted speeches from parenting books, Kalani's fire became more - subdued. A bit masked, obedience to the limited faith that her father had in her. As far as he knew, she was better.

Her incessant reign of came the rotting roots of negligence. Her father hardly had time to look after her when she was younger. He hired caretakers, had women he was dating look after her, coworkers, his sister. Deep down, he was more than ashamed of his daughter. A child born of the night and shade, and she grew in it.

When she was eleven, she was attacked by a hellhound in Central Park. A nearby satyr rushed to her rescue, and in the heat of the moment, the adrenaline activated her powers. She shot out a thorn that incapacitated the hellhound. It fell on its side, frothing and retaining a bloodthirsty snarl. The satyr took Kalani out of harm's way and gave her the gist of her godly blood.

Upon hearing of camp, she wanted to go - without telling her father. The young satyr didn't seem to even ask about her family, he just seemed eager to take her to Camp. So they went and Kalani stayed for a week to train. The satyr returned with her, and continued her training in Manhattan.

Back at home, her father had thought she went missing. He reported it, got it on the news, the internet, the paper, flyers - but she never showed up. Her father entered a depression that was cut short by meeting a young man who was fresh out of college. The two began to see each other and started dating. When Kalani returned home, neither of the two were very happy.

The young twelve year old resettled begrudgingly and explained her disappearance by telling her father about Camp and of her powers.

The rest of Kalani's childhood was grown up and out of in the eye of an oncoming storm. High school was occupied by being on the cheerleading team and doing well in classes to satisfy her need to get her father's attention, which was being taken away by his young and pretty boyfriend. Monster attacks were common, and she'd often come up scratched or bruised. She told her father they were from cheer practice or their cat. He seemed to quickly dismiss them anyone.

Her graduation coincided with her eighteenth birthday. She had plans of going to camp for a bit before heading off to college, but wanted to go out with a bang. At her graduation / birthday party, she planned to piss her father off by flirting with his boyfriend, but instead pushed it a bit too far. She carried a glass of punch in her hand and approached her dad's boyfriend. The two talked for a while, and when her father was on his way, she quickly put her hands on his boyfriend's shoulders and brought their faces close together. Not kissing, but too close for comfort. When her father saw this, he stormed over in a rage and his boyfriend pushed away inoffensively.

Kalani wore a smile and turned away to go out the door. She kicked her heels off and headed out for camp. Hoping to find peace in limbo.

sry for any typos...

That's about all i see for now.

hope i fixed Q.Q ! i italicized the changes to help you find it

This claim has been approved as a child of Demeter. You now need to make a page for them and a word bubble, if you aren't sure how to do this you can see the guide here. Once you have done that you can add your character's name to the cabin list located on the cabin pages and start role playing with your new character. If you have any questions feel free to ask a member of the Admin team.

Retrieved from "https://camphalfbloodroleplay.fandom.com/wiki/Claiming:Camp/Kalani_Dyer?oldid=1665650"
Community content is available under CC-BY-SA unless otherwise noted.