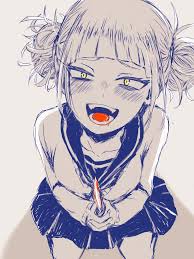 Personality: Katie is a naturally very cheerful girl, to the point of smiling even after having presumably killed someone, displaying apparent sadistic, psychopathic, and murderous tendencies and thoughts. Even when danger is imminent, as when monsters and demigods attack her, Katie continues smiling and giggling. She's also frequently seen blushing, though seemingly out of excitement rather than embarrassment, giving her a permanent somewhat lovesick look on her face. Katie is the closest friend to Andrew Campwood, however, that can be mistakened for something different. Many who have seen them talk in public say that her words towards him are, at times, mildly suggestive, however, this is truly only coincidence. Katie is seen often skipping, and despite her youth, Katie is a brilliant tactican, and is very skilled in hand-to-hand combat, operating machinery, and building traps that are almost impossible for mere mortals to detect or escape.

Hasumi was from a rich family in Japan, the Kenriyu's. Many feared the Kenriyu family's wrath, and Hasumi was set to become the next matriarch of the family. As her eighteenth birthday, she was happy, as she having an arranged marriage, but with her childhood best friend, a boy who emigrated from London with his billionaire parents, and since kindergarten, they were very close. Hasumi would meet Hephaestus at her bachellorette party. After talking to him for the majority of the night and getting drunk, Hasumi invited Hephaestus back to her hotel room, in which he accepted. The next day, Hasumi woke up with a hangover, unable to remember the night before. She then went on with the marriage. When she found out she was pregnant, she figured the child belonged to her newlywed husband Marshall, who was ecstatic, hoping for a son.

Nine months later, Hasumi gave birth to a daughter, which severely disappointed Marshall, to the point he asked Hasumi, mere moments after giving birth to Katie (then Asura), begged his wife to promise him that she would place the newborn up for adoption. Hasumi, eager to please, sadly agreed, then fell asleep with the baby in her arms. Awakening, she saw Marshall asleep, and Hephaestus stood before her, cradling the infant in his arms. "You cannot give her away." Hephaestus said, sounding like a order. Hasumi immediately remembered Hephaestus. "Who are you, really?" Hasami stammerred, in which Hephaestus responded with a sneer. "Hephaestus..." he said in a deep voice, causing Hasami to nearly faint. "Listen, you will not place this child up for adoption!" Hephaestus snapped. "But..." Hasami started, but Hephaestus interrupted. "I do not wish to hear your execuses. This child...is destined for greatness. She is my daughter, after all!" Hephaestus bellowed with a hearty laugh. "Goodbye, Hasami..." Hephaestus smiled, then...disappeared. Hasami scrambled to catch Asura, then sighed, deciding to listen to Hephaestus' orders. Then, Hasami noticed the six strange combat knives Hephaestus left behind. Picking them up, the exhaustion from childbirth then kicked back in, sending her back to sleep.

Asura's early childhood wasn't all that bad, she says often. But truthfully, it was almost perfect. Anything she wanted as an infant she got. Hasami catered to her daughter's every needs. Asura was often very happy, and rarely cried as an infant. Almost perfect. Marshall became a frequent drinker following Hasami's decision. While Hasami stayed, Marshall was out cheating almost every chance he got, not even mildly attempting to be subtle or lie about it to Hasami. Soon, Marshall regularly was abusing Hasami, something Asura witnessed happening at an early age. (This, as well as other factors, is one of the reasons Asura developed a fetish to abuse) Out of fear for the life of her daughter, Hasami tried to take the blame whenever Asura did something wrong, causing Marshall to often ignore Asura. But one day, Marshall's abuse was too much for Hasami. After getting angry about work, he grabbed a metal bat and hit Hasami. This not only knocked her unconscious, but killed her. Hasami died that day, and the police, bribed heavily by Marshall, never opened a case. However, the Kenriyu and Williams families were absolutely outraged at Marshall's options. In order to avoid being hunted down and likely beaten to death, Marshall grabbed Asura and fled to England, to start over. There, when Asura was only nine months old, she spoke her first words "Da-daa! Ma-Maa!", which were ignored by Marshall. To provide for himself, since his assets were frozen (by corruption from the Kenriyu and Williams families) in Japan. Marhsall then took a job: part-time mechanic for the vehicles of the Virtuoso family.

As Asura got older, she saw the horrible life that living with Marhsall Williams brought. First, he had her name chaanged, to Kaitlyn Madison Williams. (This later resulted in Katie severely hating her name, and insists people call her Katie. Only two people called her Kaitlyn and got away with it; her father, and Andrew Campwood, who both had permission to use that name) First, Marshall's alchohol addiction only got worse when they came to London. Not to mention, Marshall became a drug addict. No more were the days that he ignored Katie. Now he tortured her every single day, psychologically, physically, mentally, emotionally, and even socially. However, some of the things he did eventually helped Katie. For example, a week after her second birthday, Katie came home crying, complaining about how the older girls jumped her. In response, Marshall started teaching her how to fight. Marshall was also a fighting coach, teaching people karate, Tae Kwon Do, Capoeira, boxing, ground and pound wrestling, Jiu Jitsu, Savate, Kendo, Wing Chun, and Krav Mega. An extremely skilled fighter, he usually only taught one fighting form, but he insisted on teaching his daughter all he knew about fighting. Katie was already stronger than most children, and this only grew as she aged. And as she aged, Marshall noticed Katie was...different. Aside from a girl named Natalia, Katie had no friends. And slowly, he was losing control of her daughter, as she seemed to become sadistic.

By her ninth birthday, Katie was putting high school boxing champions in hospitals (Hephaestus children are innately stronger and faster than many humans). By then, Marshall was dreathly afraid of his daughter, and on her tenth birthday, his fears were correct, because one night he walked into the house, and triggereg a tripwire. The guest house exploded, killing Marshall. Meanwhile Katie was outside cheering, while Natalia was deathly silent. The two were arrested, and Katie took the blame for their actions. Natalia was let free, and Katie was found guilty by reason of insanity, and served four years in juvy, in their (rare) solitary confinement area. While in solitary confinement she was attacked by harpies several times, which she ultimately survived by using the knives Hephaestus left behind (she searched the house before detonating). Upon release, she found and killed Natalie, and found Drew Campwood, who she "connected" with. Finally, another psychopath. After that, she managed to secure herself a spot in the Pan American Games, the Olympics befor the Summer Olympics, which allowed people her age to compete. She then won a gold medal in wrestling and a gold medal in boxing, with Drew's support. The media even named "World's Strongest Teenage Girl" and "World's Fastest Teenager", to Katie's happiness. With Drew's help, he took her to Camp Half-Blood, where she was claimed by her god father, Hephaestus. She's been there ever since.

Really, really sorry for the super late check; something went on irl and I couldn't use my laptop (which is the only thing I use to open the wiki). I apologize ;-;

With all due respect to Summer, I have to veto what she said about allowing the rest of the four abilities. Our character policies do not allow for any custom powers beyond the demigod's usual powers (as to prevent imparity between characters). Unfortunately, for now, I can't go anymore in-depth with checking your claim until this is fixed since the second half of your claim seems to be heavily dependent on this.

Okay I changed a lot of things about the story. Ready to be checked! Thanks KMO, for the constructive feedback, which I severely appreciate! Any more suggestions are fully welcome!:)

"No matter what happens, my light will destroy your darkness."

OMG HIMIKO TOGA! (she seems more of a sociopath than psychopath, to me *shrugs*)

I'm incredibly sorry for only checking this now, but hey, you're claimed! I'm looking forward to roleplaying with her. :)

This claim has been approved as daughter of Hephaestus. You now need to make a page for them and a word bubble, if you aren't sure how to do this you can see the guide here. Once you have done that you can add your character's name to the cabin list located on the cabin pages and start role playing with your new character. If you have any questions feel free to ask a member of the Admin team.

Retrieved from "https://camphalfbloodroleplay.fandom.com/wiki/Claiming:Camp/Katie_Williams?oldid=1779378"
Community content is available under CC-BY-SA unless otherwise noted.