Personality: Kendra, true to her word as a nymph, loves everything natural. So much that some would even go as far as to call her a hippie. She's a vegan, and, is against using anything animal. She hates litterers and, will call someone out for just refusing to recycle. Deep down, it's just her caring for what her creator had cared for, as much as she cared for her. 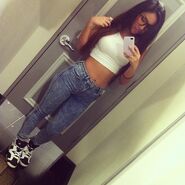 History: Kendra was created by Artemis, fully grown, about June 5th, 2013. Artemis had made her because there was a rogue Hellhound running around in Kentucky but, her hunters and her were chasing down a much bigger target, the Nemean Lion. Artemis had few hunters at the time, and, that Artemis could use all the help she could get, so, she decided not to waste woman power on it. So, Artemis gave Kendra a spear, and, shooed her off towards the rogue Hellhound. She didn't have much trouble tracking the thing, just looking at the trail of wreckage it left in its wake. Once she found it, it took her an hour but, she was finally able to turn the hound to dust with some difficulty. She then went back to her creator, awaiting further orders.

Over the course of the next few weeks, she was sent on different small missions, like, defeating another hellhound, rescuing a huntress from a fallen tree landing on her, and, even escorting a group of Demigods they found to Camp. Pretty soon, though, Artemis ran out of missions for Kendra to go on, and, Kendra became bored. Artemis offered Kendra a chance to join the Hunters but, she gratefully declined, not feeling it was her place in the world. So, Artemis, instead of keeping Kendra around for her to be useless, and unneeded, she sent her off to Camp, where Kendra would be far more useful to the Campers.

This claim has been approved as Moon Nymph. You now need to make a page for them and a word bubble, if you aren't sure how to do this you can see the guide here. Once you have done that you can add your character's name to the cabin list located on the cabin pages and start role playing with your new character. If you have any questions feel free to ask a member of the Admin team.

Retrieved from "https://camphalfbloodroleplay.fandom.com/wiki/Claiming:Camp/Kendra?oldid=1223671"
Community content is available under CC-BY-SA unless otherwise noted.