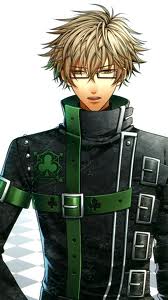 Personality:Kenneth has a very intellectual mindset. Many times, he will ask someone to rephrase themselves in a more intellectual,or logical way so he can understand them more clearly. He tends to forget about events he has no interest in.

History:Jonathan was a history professor in his early thirties, but looked more like a 20 year old man, which made him popular with his female students. He refused all of there attempts to date him, keeping all relationships strictly Student teacher. But, there was one student in his class that made it extremely hard. She was new to his class, but that wasn't why he paid so much attention to her. Her grey eyes had pulled him in and he'd fallen in love with her beauty and brains. Even so, he held himself back, until the day she informed him that she would be leaving and had already transferred from the school. Finding out that she was no longer a student he offered to take her out to coffee and that lead up to their dating.They were and love and seven months later she was claimed that she was "preggos". She stayed with him until she was 3 months, then she vanished before he could ask questions about her stomach not growing. Not too long after she came back and gave him a baby boy explaining to him that she was athena and could no longer be with him.

Kenneth grew up an "A" scholar who was so intelligent he skipped a grade in his junior high even though he had dyslexia.He was bullied and considered a nerd, but this did not phase him. He wanted to succeed in school and become a famous author and maybe even a professor like his dad. At 14, but in the 9th grade he made his first friend named Claude. Claude was really a satyr and knew what Kenneth was right away. A few days after meeting a hellhound attacks Kenneth, but Claude was able to help him get away safely. Claude tried to convince Ken to come to camp after explaining the whole Greek gods thing to him, but to no avail. Ken found the idea of gods irrational and illogical. He declined Claude's offer and began to ignore him. He saw the hell hound attack as some rabid dog trying to spread rabies.

A year later Ken was still friends with Claude but not nearly as close. He was still doing well in school and no weird event happened until one stormy night. Ken forgot his bike out side and didn't want it to rust, so he went out in the rain to bring it to the shed. Unfortunately his glasses that he needed to see fell off and broke, so he was unable to see the Cyclops standing behind him. Before he knew it he was knocked out and tied up. Confused and dazed he had no idea what was going on until it was too late. Ken died that night and regretted not going to camp when Claude told him to.

Athena feeling sad for her son and wanting to give him a second chance asked hephaestus to repay her by turning her son into an automaton. He was created just like his human form, maybe a few feet taller. As soon as he was created he was sent to camp and is now eternally grateful to his mother and hephaestus

Abilities?: He can release a small amount of electricity, conceal weapons within himself, he is programmed with the feeling he had before death, along with more knowledge and combat skills . He can record and mimic anything said or played around him. Also he has special equipment that can determine heat temperatures and weak pressure points, store enemy images and data and enhance his accuracy.

Athena doesn't get pregnant, her children just pop out of her head :)There is a crime, but no criminal. ★❣Broken❣★

This claim has been approved as as an automaton. You now need to make a page for them and a word bubble, if you aren't sure how to do this you can see the guide here. Once you have done that you can add your character's name to the cabin list located on the cabin pages and start role playing with your new character. If you have any questions feel free to ask a member of the Admin team.

Retrieved from "https://camphalfbloodroleplay.fandom.com/wiki/Claiming:Camp/Kenneth_Sylvester?oldid=1461746"
Community content is available under CC-BY-SA unless otherwise noted.