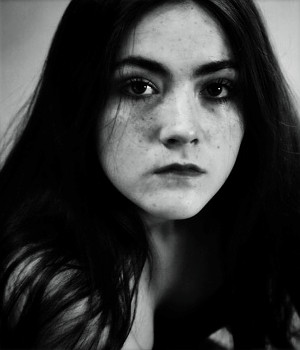 Her model is Isabelle Fuhrman, who I perm reserved.

Kristjana is, by nature, a thought oriented person, seeing things in a very literal light, making her unlikely to be able to take a joke. This and her intuitive thinking leads her to latch on to what is logical instead of figurative, so she is a firm realist, grounded and with minimal imaginative function. She prefers to take her route through life in this same logical fashion, although she can lose this logic and cool head all together in the face of adversity, irritation or anger.

Although she tends not to feel positively, the negative emotions are very much strong and impactful. A pessimist at heart, Kristjana naturally sees only the dark side of life and is quick to betray or resort to violence if it is for her own ends. As long as people move in sync with her rules and values, her role as chessmaster takes a back seat although its existence is as such still very prevalent. Kristjana is definitely loyal to the introverted parts of the INTJ personality, quickly venturing out alone to the library or other places of quiet solitude to look into her inner self, or hone her existing intuition and intelligence. Her lack of empathy makes it difficult to understand feelings, and the impact of her negative feelings have left her bitter, cold, violent and with inner demons. Kristjana has a dark mind, and it's difficult to know if she's ever being nice or if she's being poisonously sweet as she thinks of ways to kill you. A effortless liar she prefers to manipulate rather than be manipulated, and her scathing remarks are not hard to come by.

Emiliana was a gravedigger, nothing too special or pleasant. She was broke, and she was doing every job he could scrape to get a few coins, and even then she bartered and begged because she had to. Ever since her husband had left her she'd suffered emotionally and economically, and was quickly having to adjust to a working life. This occupation often involved her feeling an intimidating presence, believing it to be spiritual she fled the job...to later find it was a rather handsome man, who said he was from her high school and had wanted to ask her out ever since prom. Emiliana, although she racked her brains, didn't remember the hunk, but had never been naturally suspicious and accepted.

Emiliana had been threatened by relatives of the dead, some of whom were quite insane in her opinion, but it was something about how...Kristjan, he said, his Icelandic accent thick like hers, emanated, that made Emiliana slightly uncomfortable. Emiliana quickly got slightly scared - she'd never felt this way in Reykjavik before. Kristjan himself, although handsome seemed very lustful, and effective at leading her astray like a lost sheep from her values. Emiliana, soon, was drinking, smoking and was suffering from a caffeine addiction. She had to stop all of this abruptly when she was told she was pregnant, the day that Kristjan simply disappeared from her life. People had a habit of disappearing.

Emiliana took this very badly. She slipped into depression, and back into debt which resulted in her being fired from one of her last remaining jobs and being evicted by a particularly spiteful landlord. It was a reality for Emiliana that her life in Iceland was hanging from fraying ropes. She was put up in New York by her sister, Lilja, who had moved out there at seventeen. Emiliana told her about Kristjan the freeloader, and Lilja said it sounded like her friend's ex-boyfriend, and directed her to the house of Katelyn Rivers, whose friend had had a child with Thanatos (and told the story, specificating the god) to solve her problems. Katelyn told her it was the God of death, Thanatos. Emiliana laughed, laughed and then left the barmy woman's household, assuming she'd gleaned nothing. Emiliana found a note on her pillow, signed from Kristjan, and the level of understanding, the words written and the fact he'd known where she was confirmed he was godly.

Emiliana, again, took this badly. She took some, but not many pills, she slept and ate more, she let out her feelings. But the illusion wouldn't go away. It stuck, like adhesive, to her reality. Emiliana didn't accept it, not until the unbearable pain of Emiliana's birth. She had to accept that this was ream, and unfortunately did so by relapsing and taking assorted drugs. Lilja took charge of the babe for the most part, ignoring the heartbreak as her sister wasted away. The girl was almost ghostly, bony with sable black hair, and had an unnerving presence even so young. But still, unselfish, Lilja raised the dubbed Kristjana to be a confident young girl.

Kristjana was violent and angry sometimes, quiet and book-loving others. If there was anything Lilja could tell she'd inherited, it was Emiliana's unpredictability. Kristjana didn't go to school; she was schooled by Katelyn (who was a child of Athena.) Katelyn knew very quickly of the father who Emiliana never spoke of, but never breathed a word, even after Emiliana died of a drug overdose. Katelyn, Lilja and Kristjana, after Emiliana's death, moved away from the city at Katelyn's suggestion. As Kristjana grew she kept to her room and read, and was often bitter. Lilja was appalled. Katelyn however, was expectant, and enrolled Kristjana in martial arts classes at the age of seven, to vent into a hobby and for self defense,  and in jujitsu at ten. No matter how much Kristjana protested Katelyn accompanied her to and from these classes. Kristjana also took up knife throwing.

At age 13, Kristjana was attacked by a fire breathing horse. Katelyn gave her celestial bronze throwing knives and between the two of them they killed the horse and lived to tell the tale. This involved several burns (one of which scarred) and a pretty nasty bite from some of its attacks, and Kristjana's several learnt throws eventually overpowered it with Katelyn to help. Katelyn purposefully said nothing, pinning the blame on a nasty fall, and Lilja, who was rather drunk, believed her.

At age 14, when her and Katelyn had gone shopping for presents that Kristjana had wanted for her birthday (Katelyn had made them take the weapons despite Kristjana's protest that it would mean more to carry) on the way back they were attacked by a harpy. Kristjana was very spooked by the winged woman and both sustained injuries before they could finally injure one of the harpy's wings. Katelyn took them both to the hospital where they were bandaged up. It disabled Kristjana for a while but she was still able to continue with knife-throwing although she had to take a break from martial arts.

This didn't happen again until when she was 15, which time she was alone. It took her far longer to defeat the fire-breathing monster and was severely injured. Katelyn got worried that Kristjana hadn't arrived home and went to find her, finding her passed out, she took her to the hospital and finally told Lilja what was going on. After such an altercation with fate, Lilja had to accept that it wasn't safe for Kristjana. After which situation Katelyn got permission from Lilja to take her to camp and she was claimed by Thanatos.

Weapons: Kristjana is most natural with throwing knives, but her primary weapon is a spear, because it can still be thrown.

This is looking really good. But a few things to work on.

Otherwise, this looks great. I can't wait to rp with her. :)

This claim has been approved as a child of thanatos. You now need to make a page for them and a word bubble, if you aren't sure how to do this you can see the guide here. Once you have done that you can add your character's name to the cabin list located on the cabin pages and start role playing with your new character. If you have any questions feel free to ask a member of the Admin team.

Retrieved from "https://camphalfbloodroleplay.fandom.com/wiki/Claiming:Camp/Kristjana_Em%C3%AClsd%C3%B3ttir?oldid=1534686"
Community content is available under CC-BY-SA unless otherwise noted.