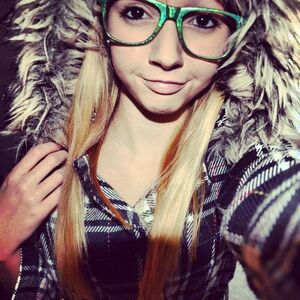 Personality:When you first meet her, Laydon act like a bad girl would be. But if you know her more, she opens up to a become sweet and fun person. She is also creative and very inspired in everything she does.

History: Laydon Marie Aspire was born to Nolan Aspire and Aglaea on November 25. Her father had been explained everything by Agalaea before she left. The young girl was raised by her father. The man was very sweet, and he taught Laydon well. Laydon grew up and she was an angel but when she turned 7, she started to be a devil. Laydon was a bad kid, she was sent to private school, and they even tried home school. Laydon didn't ever budge, was never sweet.

Laydon turned 9 and she got a package at the door from Aglaea. In the package was a ball-point pen. The pen turned into a CB sword. Yet, Laydon never bothered to use it. She never really had a use for it, but yet she carried it everywhere. When she turne 11, the attacks started. One day she went to stab a harpie with the pen and it turned into the CB sword. She killed the harpy and ran home, not telling her dad.

When she turned 13, a new boy came to her school. His name was Landon. Landon was a satyr undercover. Landon and Laydon became really good friends. One day, they were walking to the library when they got attacked by a hellhound. Laydon stabbed the hellhound with the pen and asked Landon if her knew anything. Then he told Laydon everything. Laydon said she would go to camp and she asked her dad and he told her to go to camp. At camp she was claimed by Aglaea

This claim has been approved as daughter of Aglaea. You now need to make a page for them and a word bubble, if you aren't sure how to do this you can see the guide here. Once you have done that you can add your character's name to the cabin list located on the cabin pages and start role playing with your new character. If you have any questions feel free to ask a member of the Admin team.

Retrieved from "https://camphalfbloodroleplay.fandom.com/wiki/Claiming:Camp/Laydon_Aspire?oldid=1223891"
Community content is available under CC-BY-SA unless otherwise noted.