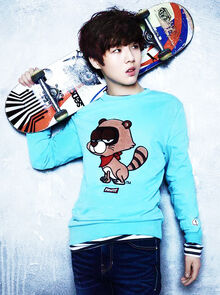 Personality: Kyung-min is extremely friendly and sociable. He could be called borderline naive. Intelligence really isn't his strong suit, and he can be impulsive. However, no one can discredit his loyalty, or how far he would go for someone he loves. He adores his big brother, even if he doesn't realize his bro kind of hates him. Kyung-min is too stuck on finding his brother to think about other things, like friendship or romance.

Lee Kyung-min was born in Dongducheon, four years after his brother Dae-sung. Their mother was a stripper, and their father was one of the clientele, willing to pay extra to get up close and personal with her. At first, she thought she could handle having the kids, but when Kyung-min came around, money got tight. She managed a year, until she decided to move them to Seoul in the hopes of more job opportunities. Unfortunately, while she did manage to find better paying jobs, Seoul was pricey. In the end, she felt it was better to give her kids to the care of an orphanage.

As the siblings grew, they formed a close bond, with the whole "just us two against the world" attitude. Or well, that's what Kyung-min felt anyways. He was extremely attached to his big bro, his only family. In a way, he was kind of like Dae-sung's annoying puppy. He never worried that when his brother would leave him became emancipated, although perhaps he should've.

The night before Dae-sung's birthday and emancipation day, fate struck. Somehow, a fire started in the orphanage while the kids slept. Alerted by the smoke, the kids and workers there started pouring out. Kyung-min almost got trampled, but Dae-sung saved him. Once they got a far enough distance from the orphanage, Dae-sung told Kyung-min to wait for him while he went back to help out. Kyung-min didn't wish to leave his brother's side, and told him so, but Dae-sung promised to comeback. Reluctantly, Kyung-min let him go play hero.

The fire trucks eventually came, but too late. Three people didn't make it out. The first two were identified as a worker and a six year old girl. The third one was that of a teenaged or young adult male. Kyung-min, at first, didn't think it could possibly be Dae-sung. But he'd made a promise to comeback, and so far, Dae-sung hadn't turned up. By nightfall, they'd identified the body. It hadn't been Dae-sung, to Kyung-min's relief, but Dae-sung still hadn't turned up. A week went by. Then another. The kids were crammed into another orphanage while the old one was being repaired. Kyung-min continued searching for his brother, as did the notified authorities. Many believed he must've just run off, now that he was legally an adult and free, but Kyung-min believed otherwise. After all, he'd promised to come back.

About a month after the fire, Kyung-min ran away from the orphanage. His goal? to find his brother. He moved around a lot, working odd jobs. Although he looked young, he managed to convince many that he was 19.

Eventually, he got himself a gig on a fishing boat. It was one of his more pleasant jobs, and it lasted a while. One of the crew members let him stay at their place.

Although he wasn't the smartest, Kyung-min knew he was running blind. His quest to find his brother had bared no fruits. His prospects of finding Dae-sung became bleaker, and his optimism was turning to dust. That's when a storm came to shake things up.

One day, (by now he was 17), a giant storm hit while the fishing boat was out on the water. In the chaos of the storm, A crew member running by accidentally pushed Kyung-min over board. He never learned how to swim, and thus was left to drown.

However, Asteria had been watching his journey for a while. She'd somewhat become enamored with the hopeful fool, and pitied him. She asked Poseidon to spare his life, so he did so.

Kyung-min wound up on a beach, facing a beautiful woman. It was about nighttime, and the stars seemed to make her glow. She was, of course, Asteria. Asteria offered him a deal. She could help him in his search for his brother, with a price. Kyung-min didn't even ask what the price was; he would do anything to find his brother. So, he agreed. Asteria then turned him into a star nymph, bringing him with her to Olympus. Bewildered, Kyung-min asked where he was, and what she'd done to him. She explained she was a goddess, and that she had just turned him into her servant. She told him it was the only way to gain the powers that could help him on his search, like proper bearings, and also he could find his brother through the gossip of Olympus. She then went on to explain the whole concept of the world he now lived in....and the fact that he was immortal.

Much of what she said left him dumbfounded. It took him about four weeks to accept the information, and another four weeks to get used to Olympus. He asked Asteria why she couldn't tell him herself where his brother was, but she merely replied that that was something he alone could discover. Help was one thing, giving the straight answer was another.

Gossip did help. He learned that his brother was not dead, and that he had somehow gained immortality as well. The details where iffy though. Some said he'd become a tree. Others said he'd become a wind spirit. The main thing that was clear is that he was no longer human. Like him, his brother had become a nymph of sorts. His actual location was still unknown.

When Kyung-min was 20 (or would've been 20), he left Olympus. He was tired of waiting around. He wanted to take some action. Kyung-min had heard of a camp, made for the training of godly children to face the monsters of the world. Many nymphs went there, each with their respective reasons. He felt that, with the nymph population there, he could surely find his brother once and for all.

This claim has been approved as a Star Nymph. You now need to make a page for them and a word bubble, if you aren't sure how to do this you can see the guide here. Once you have done that you can add your character's name to the cabin list located on the cabin pages and start role playing with your new character. If you have any questions feel free to ask a member of the Admin team.

Retrieved from "https://camphalfbloodroleplay.fandom.com/wiki/Claiming:Camp/Lee_Kyung-min?oldid=1786246"
Community content is available under CC-BY-SA unless otherwise noted.