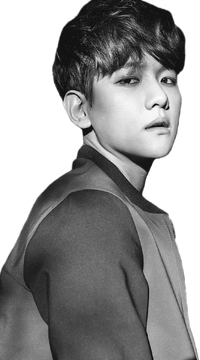 Personality: This is a major WIP as I want to include some large amount of detail (sorry for any inconveniences), but in short he's an asshole who doesn't give one.

History: One thing Kaitlyn Byun never told anyone, was the fact that she was expecting twins. Of course, when she was pregnant she was larger, but many didn't ask out of respect. On the 30th November 1994, she gave birth to twin boys, naming them Oswald and Levi. As soon as she could, she gave the younger one up for adoption - that one being Levi. One of the adoption workers, Bethany Cha and her husband Jinyoung, decided that they wanted to adopt him and soon he went from Levi Byun to Levi Cha.

Growing up, Levi was seemingly unaware of the differences of his adoptive siblings to himself - whilst their features were sharper, he had a younger looking, cuter face. Bethany and Jinyoung loved him just as much as, if not more, than their own children and over time a large amount of resentment was shown towards him. Despite this, Levi's life was unchanging up until his 13th birthday.

The Cha's had the innate ability of mortals to see through the mist which was why, when Levi had his first attack, they felt as much fear as he did. While they could seemingly hide wherever, the monster - which happened to be a hellhound - followed Levi wherever he went, pushing him into one of the small rooms in the Cha household. He would've been left for dead if he hadn't picked up the discarded fire poker - which happened to be celestial bronze due to the home's previous demigod owners - and attacked wildly in hopes of killing the monster. One pile of gold dust later, Levi was slowly excluded from the outside world.

Although Bethany and Jinyoung weren't demigods themselves, they knew of people who could help Levi and train him for future monster attacks. Which is why, from his 13th birthday to his 16th, he was trained extensively by one of the family's demigod friends. However, no training could prepare Levi for the events of his 16th birthday. Coming home from demigod training, Levi was greeted by the Cha family who - after enduring a multitude of attacks - gave him the choice of running away and disconnecting himself from them, or for them to leave him at an undisclosed point as the attacks were getting to be too much. As if the events were any foreshadow, at that moment a harpy attacked. Whilst Levi tried to find a weapon, the Cha family scrambled to their car, frantically trying to escape. This escape, however, was in vain and in their haste they crashed which - along the line - hospitalised and claimed the lives of all of then.

Meanwhile, Levi scrambled for a weapon to which he found his fire poker. Unlike his first attack, he thrusted with more control and more experience, killing the harpy with a seeming ease. Feeling unsafe, Levi scrambled to pack a single bag with the essentials and left the home. Where did he go? He went on to live homeless essentially - however, he always stayed within an easy walking distance to the home he'd once live in, going there if he absolutely needed to. He learnt in the next few weeks that his family died and instantly blamed himself - not returning to the home and going to a homeless shelter and living there for the next two years. Of course, there'd be demigods there and it seemed as if they had a fighting schedule so Levi was rarely harmed.

When he was 18, his twin Oswald's step-father died in which the former was sent on a goose-chase for some fire (read that here). Hades noticed that the Byun child had a twin who was also upset about some deaths and offered him the same thing. Unlike Oswald, Levi was apprehensive and refused constantly. It eventually got the point where Hades, joint with Morpheus (who was in a very cynical mood since a child of Prometheus killed one of his favourite children) cursed Levi to where whenever he slept he'd see horrific images of death until he woke up.

Until May 2015, Levi remained in the homeless shelter until one of the demigods told him of camp to which he left promptly.

Retrieved from "https://camphalfbloodroleplay.fandom.com/wiki/Claiming:Camp/Levi_Cha?oldid=1568795"
Community content is available under CC-BY-SA unless otherwise noted.