God Parent: Apollo, or anyone who seems to suit her 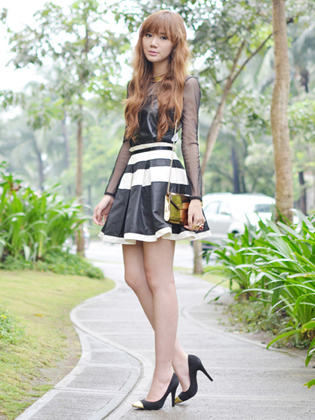 Personality: Lia is normal. She doesn't like to argue and has a very long patience. She's also very glutton. She loves talking and she's really friendly but she gets easily estranged by flirts.

History: Priscilla O'Callaghan was a demi-god daughter of Athena. She got into camp by age 13. When she turned sixteen, she decided to become a huntress of Artemis and even became the lieutenant of the huntresses. By the age of nineteen, she met Apollo who was in the guise of a hunter named Seth in the middle of the forest while hunting. Not wanting to give up her being as a huntress, she tried to avoid him. After more meetings and more sweet talk done by Apollo, they fell deeply in love. Artemis freely but sadly let go of Priscilla with the knowledge that it was actually Apollo. Apollo revealed his identity to Priscilla right after she quit being a huntress. Priscilla still went for the idea even if she knew that he was going to leave and so they were together for quite a time and finally made a baby and in the way that Athena and Priscilla was born, their child was peculiarly born in the same way. The child was named Lia.

As Lia was seven months old, Apollo had to go and pursue his responsibilities as a god. Priscilla raised Lia just near camp and worked in the nearby town's hospital as a doctor after she finished her studies in medicine. Lia has learned about being a demi-god as early as the age of four and has seen her father in her dreams quite a few times but she doesn't think it's real, she believed that it was only just a dream.

As much as she never believed with all that she's told, she was brought to camp by her mother for quite a few times and she even sneaked into camp frequently but was never attacked. Priscilla has also told the satyrs to not come to her just yet so that she could at least have a normal life for quite a time in her life.

Lia studied in a public school and was part of the in crowd. She was popular and she was known for being really fashion forward. Although with the feminine reputation, Lia has trained herself with throwing knives and poison darts as she had seen people in camp training with weapons so well so she decided to have her own training. One day still on her freshman year, she was with her mum and was attacked by a minotaur. Priscilla owning a comb that transforms into a sword, Priscilla cut off the minotaur's horn unsuccessfully, and had an injury on her shoulder and Lia tried attacking the minotaur with a couple of her throwing knives and so she just tried using the minotaur's horn to stab the minotaur which was successful. But Priscilla's life didn't take it, Lia brought her mom to the hospital and has held a funeral as well and was told by a social service worker about going to foster care.

Not wanting to go to foster care, she ran away to camp a week after the funeral and encountered a flock of harpies as a group of demi-gods were on their way to town for a hang out. Having throwing a roll of throwing knives wrapped around her thighs, the was able to kill a couple harpies and with the help of the other demi-gods, they were able to kill all of the harpies. The demi-gods talked to her about why she was there and she explained. They brought her to camp and she was claimed as a daughter of Apollo.

Retrieved from "https://camphalfbloodroleplay.fandom.com/wiki/Claiming:Camp/Lia_O%27Callaghan?oldid=1223913"
Community content is available under CC-BY-SA unless otherwise noted.