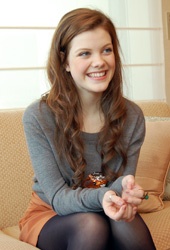 Luciella is a cheerful and optimistic girl who tries to look at positive things when things are down. Her father wouldn't tolerate lies and dishonesty so she grew up being a very honest child. She would never tell a lie unless needed to.

Luciella is also very forgetful. She would forget almost everything that happened the day after, although she would remember some tiny bits of the events that no one else remembers. She also has a very bad sense of humor and is really dense. She is a really picky eater.

She absolutely adores nature and loves the outdoors. She loves reading books about plants and botany.

Luciella's fatal flaw is self-doubt. She doesn't trust in her abilities and doubts herself alot. Her fatal flaw makes her unable to unlock the full potential of her abilities.

How her parents met

Arthur, seeing as the woman has strayed from the group, decided to approach her and offer her a private tour. The woman agreed and they toured around the garden. Arthur was astonished as the woman talked on and on about the plants and their common and scientific names.

After that, they became friends because of their mutual love for plants and nature. They became closer day after day and finally, they fell in love and started dating. It was on their 1-month anniversary that Luciella was conceived.

The woman disappeared without a trace 3 days later. Arthur looked for her for 3 months until a baby arrived on his doorstep. The baby was inside a flowery baby basket with a note attatched. The note said:

"I apologize for my disappearance, my love. Unfortunately, you will not see me anymore, for I have returned to my home. Please take care of my little flower for me."

Arthur took in the baby which was the last reminder of his lost love and named her Luciella. The night after he received Luciella, the woman appeared in his dreams. The woman explained that she was a goddess and that their child was a demigod. She also explained how Luciella will soon face many dangers and that she will soon leave him to go to a sanctuary for demigods.

That was the last time he saw her.

Luciella was a hyperactive toddler. She couldn't stay put in one place and would always be found doing something, whether it's drawing, running, or playing. Arthur struggled trying to get the child to behave but the only way to get her to stay put is to put her in their garden, where she would spend hours staring at the plants around her in awe.

She was a normal child until her father discovered that she couldn't read properly. It was here when he remembered what the woman told him, "Demigods' brains are hard-wired with Ancient Greek and can't read modern languages".

She was diagnosed with ADHD and dyslexia at age 4. She was sent to a school for troubled kids.

When she was 5, her father married a woman that looks similar to her biological mother named Aria. Aria was kind and motherly and Luciella loved her. Aria loved the little girl back and tried her best to be a good mother, knowing the child hasn't met her mother since she was born.

At age 6, Luciella was gifted with a younger half-sibling. Luciella loved her new younger sister named Lilianna, whom she affectionately called Lili. Lilianna grew to love and adore her big sister and spent all her time playing with her.

On her 7th year of life, Luciella started seeing females waving at her from the woods behind their house. At first, Luciella was a bit scared of them until she realized that they were nature spirits. Lilianna also saw them, revealing that the young girl was possibly a clear-sighted mortal.

When she turned 8, Luciella moved to a new school when a strange event in school occured.

In her new school, Luciella made a new friend called Glenn, who was crippled at a young age. The two soon became best friends.

Her life was a bit more normal when she was aged 9. Her grades were often Cs and Ds and sometimes a rare B.

At age 10, Luciella's struggles in school became more apparent. Her grades lowered from Cs to Ds and Fs. Her father was disappointed in her but helped her with her studies nonetheless.

Luciella learnt of her godly parentage at age 11 after a Fire-Breathing Horse attacked her when she was walking home from school. The equine rushed past Luciella, who fell down the pavement and her clothes burnt. The horse kept on rushing to Luciella, intending to burn her alive. She dodged out of the way and ran.

She didn't know where she was going but what she did know that the horse was gaining on her. Eventually, she reached the Washington Park. She stopped for a second and turned around. The horse was still gaining on her so she continued running.

The horse was now a few feet behind her when suddenly, reed pipes are heard playing. Vines began creeping up the horse's legs and chaining the flame-breather, effectively stopping it from reaching Luciella. Said girl began looking around for the source of the music when she found Glenn by a tree, playing his reed pipes.

Glenn's crutches were nowhere to be found, which made Luciella looked puzzled. She became more puzzled as she realized that Glenn was goat below the waist. The boy/goat hybrid quickly kicked a sheathed dagger at Luciella's direction.

Glenn's eyes told her to go and stab the monster while it is restrained. The vines were slowly being burnt while new ones struggle to replace the burnt ones. Luciella, getting the message, picked up the dagger and unsheathed it.

She walked towards the horse and raised her dagger. She hesitated a bit. She didn't want to kill anything. But seeing her best friend struggling to keep the monster at bay for her, she made a choice and stabbed the horse hard and it became a pile of gold dust.

After that, Glenn accompanied her home. On the way, the boy explained that he is a satyr and that all the Greek mythology they learnt at school is real.

When they arrived at Luciella's home, Arthur and Aria immediately embraced Luciella, relieved that their little girl had arrived home safe and sound. They asked Luciella about the burnt clothes and burns but Luciella just shrugged it off, saying that it's better than getting home in pieces.

At age 12, Luciella discovered her chlorokinetic abilities when a Giant Scorpion attacked during her daily walk in the forest. She was quickly disarmed by the scorpion so she resorted to using a different method. She trusted in her instincts and quickly shot the scorpion with very sharp grass blades. She retrieved her dagger and, while the scorpion is weakened, stabbed its underside, thus reducing it into a pile of gold dust.

Since the Fire-Breathing Horse and Giant Scorpion attacks, monster attacks have been getting more dangerous as the years pass by. Realizing that by staying with her family may get them killed, she decided to run away for their sake. She quickly notified Glenn, gathered things neccessary for survival plus a family photo, wrote a note for her parents, and left at midnight.

For 3 years, Luciella and Glenn were on the run. Monsters were constantly attacking them and Luciella was getting stronger and more accustomed to fighting and killing monsters day by day. Her survival skills were sharpened and so did her demigod abilities.

At age 13, Luciella celebrated her birthday with her second Giant Scorpion kill. She killed the scorpion by shooting poisonous pine at it/shooting multiple plant thorns from her fingers/creating a small tornado of leaves and grass blades(depending on which godly parent is chosen) and stabbing its underside with her dagger, which she named Aeithalis(Evergreen).

At age 14, Luciella killed another Fire-Breathing Horse by leading it to a river and stabbing it with Aeithalis.

At some point between their journey, Glenn gave Luciella another weapon, a Celestial Bronze sword which Luciella named Oroseira(Sierra).

At age 15, Luciella faced a Scythian Dracanae. The fight involved lots of jumping and dodging, plus a whole load of energy taken from Glenn as he tried to hold down the dracanae. Luciella used the move she used to kill the Giant Scorpion and stabbed the dracanae.

Much more detailed than before! XD

Some things I've noticed that kind of stood out to me:

“UGH! You threw off my groove!”~Pandora

Okie, how's the edits I made?

looks good in my opinion. I'll ask a rollback (and etc...) to check it out when they can to see if they can catch anything i might have missed. XD

“UGH! You threw off my groove!”~Pandora

Thank you, Panda~! :D I'm sorry for being an impatient prick...

This claim has been approved as a daughter of Demeter. You now need to make a page for them and a word bubble, if you aren't sure how to do this you can see the guide here. Once you have done that you can add your character's name to the cabin list located on the cabin pages and start role playing with your new character. If you have any questions feel free to ask a member of the Admin team.

Retrieved from "https://camphalfbloodroleplay.fandom.com/wiki/Claiming:Camp/Luciella_Eastwood?oldid=1565251"
Community content is available under CC-BY-SA unless otherwise noted.