He is quite an unhappy person and a bit of a pessimist but tends to look at the situation more on the logical and realistic side than the worst side of things. Though sometimes cautious, he generally goes into everything new head first without even considering what it might bring, as long as he thinks it is the correct thing to do, he'll do it. He is generally calm and nonchalant some people say he is like the sea, though calm, he hides a burning storm inside of him, one that’s just ticking to be let loose. Socially, he is the type of person to calmly watch by the corner of the room at the party but when he wants to he can be the life of the party and people generally enjoy talking to him. He doesn’t really care for things that doesn’t directly affect him, some can say he is quite selfish because of this, but can just as easily kill people who intend the people he care for harm. Though untrustworthy now he use to be trusting to the point of it being ridiculous. He doesn’t care for life, though not waiting for it’s ending, he doesn’t particularly find it the most interesting thing. He is generally a mean person and isn’t generous and needs tobacco to get himself through stressful situations. 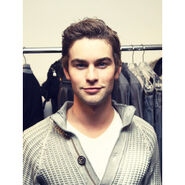 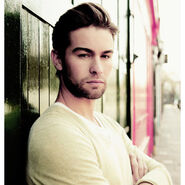 Caroline met Poseidon in Italy at a festival and got into a conversation with him, eventually Poseidon asked her out on a date, and soon she had fallen pregnant with his child, but he had to leave after certain circumstances. In despair, Caroline lived in a cabin in the forest nearby, as her own parents kicked her out. There she gave birth to Lucifer, who soon nicknamed himself 'Luc'. She raised him there by herself and homeschool him. When he was ten, he was attacked by a harpie in the forest but a hiker passing by was a son of Ares and quickly killed it. Knowing he was a demigod he tried to convince his mother to send him to New York but she quickly declined this offer so instead, the hiker gave Luc a celestial bronze sword and whenever he could, Luc practised on a scarecrow in his backyard and was careful not to go out by himself. On his eleventh birthday he was with his mother learning about the Greek Gods, when two people kicked the door open, the door smashed on the hinges and crashed into the room with guns, they were just robbers, trying to get some money but during the struggle, one of them shot Caroline. Seeing this, Luc bolted out the backdoor and into the forest. For the next hour Luc wandered the forest, hoping to get away from the men and he still doesn't know if they did follow him, but he was unable to think of what to do now, he was in mourning already, already accepting his mothers death, eventually he found a village but it was at night and some thugs grabbed him off the street and sold him to a slave trading ship where, because he was the smallest, he was picked on frequently. The other children would abuse him and tied him up so he could not get his two meals a day. However this allowed him to realize that their captors had been drugging the food and drink. Soon Luc noticed the other kids going insane. Shortly after they began to go insane the ship ran into a storm and was destroyed and he barely escaped with his life as he had grabbed a piece of driftwood, still thinking that he could drown, and Poseidon sent a few servants to drift him to the coast of Greece, and was far too unconscious to notice them. He was around thirteen at the time. Luc walked inland to find food and collapsed from exhaustion before he was found by a young woman named Jane who took him to her little village. She claimed it was because she had a younger brother and sister about his age and couldn't bear to see him starve to death. Jane took him in and added him in to her family of four, including her younger twin siblings, Michael and Georgina, and the grandfather. He lived with them for a period of time, he often spent time reading and properly learning how to fight. He was attacked by monsters twice a year, first, when he was fourteen, he found a hellhound on the outskirts of town, he climbed up a small house and managed to throw the sword right into it's mouth, killing it instantly. When he was fifteen, he was attacked by two harpies but he could easily dispatch of them. During this time, he grew to care for them and wanted to find a way - legal or not - to repay them. Later on, Jane fell in love with a man, named Damien, who gave her "nutritional supplements" as the twins were rather sick but they couldn't pay for the medication so she readily accepted into her life, and mixed it in with her food. Luc strongly advised her "I'll do something about the money, so don't see that guy anymore!" because he didn't trust him or the 'supplements', and even Michael had begun to suspect something. Jane was touched by his kindness but refused, saying that if it was just her then she couldn't protect her family. Jane was later killed by Damien, who murdered her because she let Michael take Georgina's piece of the supplement. After this Luc left the village to start his life of crime without telling anyone why. At one point, Michael went after him to convince him to come back but Luc threatened him and told him to leave. Despite the bad memories it held, Luc determinedly stayed in their village. Luc's real goal was to get enough money to pay for the grandfather's hospital fees, but he did not tell the twins of this goal, causing many misunderstandings between them. Luc, however, considered it better this way as he would not have to worry about them getting hurt. Luc joined a band of thieves and began to rob corrupted people to pay off hospital bills for Jane's grandfather. He never said if he is really rich, because he definitely gave a large amount to support the sickly old man. Eventually, the grandfather died and not seeing a point to staying he bought a ticket to New York where he was found by a satyr after the first night and was brought to Camp. <Tabber>

Hey ill be your claim checker today and would like to say this is a well written out claim however there are 2 things i feel you should fix before i can accept it.

2) The part where Luc is drifting through the sea on a driftwood and you claim his father sent him to the coast of Greece, I'm not to sure if that would count as direct interference but maybe you could say Poseidon sent some of his servants to guide the driftwood to Greece. you could probably say Luc was so weak he didnt even realize the servant or maybe a water nymph came and stayed blended in with the water.

This claim has been approved as a child of Poseidon. You now need to make a page for them and a word bubble, if you aren't sure how to do this you can see the guide here. Once you have done that you can add your character's name to the cabin list located on the cabin pages and start role playing with your new character. If you have any questions feel free to ask a member of the Admin team.

Retrieved from "https://camphalfbloodroleplay.fandom.com/wiki/Claiming:Camp/Lucifer_Francis?oldid=1781081"
Community content is available under CC-BY-SA unless otherwise noted.