Camp Half-Blood Role Playing Wiki
Register
Don't have an account?
Sign In
Advertisement
in: Claimed, TimeForTheTea, Claimed by ~The Musician~ 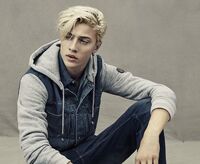 Personality (at least a sentence or two): Luis is creative and a jokester. Often enjoying to pull pranks on people, he can often be seen as non serious and playful. However, he is also quite nonchalant to serious issues and whenever someone becomes angry with him or he finds people intruding on sensitive topics, he distances him and tries to minimise the significance of the event and can be interpreted as quite apathetic. Though quiet and withdrawn, he is social and likes to be around people, though he's never truly honest or open with them. Having built many walls over his life, he's able to slip on masks with ease and struggles now to decipher which one of them is the real him. Continuously getting lost within his own head, he can often forget the world around him and can be found forgetting everything from people's names to what he ate even ten minutes ago.

He's trying to move on from his past, though, trying to come to terms with everything he's done and committed. One method of this is through his return to music, buying a guitar and relearning how to play it. Another way is that he tries to is to be as charitable as he possibly can be and helps everyone and anyone, whether they ask for it or not. Though he use to be tense, he's found techniques and methods to help him relax and often prefers to keep himself tranquil and relaxed. For this, he can often be seen meditating at the crack of dawn on the outskirts of camp. However, if someone does manage to fight through his apathetic nature, he can be found to be quite angry and a fearsome temper and he tries his best to keep this side of him hidden and kept away.

History (more than a paragraph): It was in 1998 did Oizy stumble across Christina St Clair. She was a waitress at her families restaurant, though this title was debatable, and she spied her across the street. Dressing herself as a mortal, she introduced himself as a soldier and they began their affair. She had a fiance already but she couldn't resist Oizy. They dated for a few months, with Christina pretending to be at university as she was studying business, before she realised she was pregnant. Believing it to be her fiance's, she broke it off with Oizy, feeling guilty over the sudden event. Nor did she have the funds to leave her fiance and raise the child by herself, despite wanting to do so having realised she wasn't in love with him anymore.

Luis was married three months after his parents were married and he was raised by his grandparents as his parents were either travelling or too busy studying or working. This didn't bother Luis as he loved his grandparents and was constantly surrounded by his cousins. He was an inquisitive boy, constantly running off to explore the streets of Madrid whenever he could, and adored school and what opportunities it gave. He eventually began to fall more and more in love with music, begin gifted a guitar when he was seven. Even when he was young, he was expected to work at the cafe and did his part but he often just ran away to do his own stuff, preferring to elaborate on his own music and explore. He didn't bother with friends, why would he? He had his cousins, uncles and aunts to keep him company and as years passed, he began to spend more time with his parents as well. He was happy.

It was when he was seven years old did everything turn upside down. It was one of his uncles who brought this onto their family. He had become in debt to a Japanese group, known as the Satsujin, and they had travelled to Madrid in order to have the uncle and his family pay them back, though this time it wasn't going to be with money. Luis was in the attic of the building when it happened and he heard the screams and gunshots of his family. He recognised his father first, then his mother. He didn't get out of the attic, he curled into a ball, hoping no one would find him. Just his luck though, when one of the members had the brains to look through the attic, finding Luis. Dragging him back down to the main area, he found six other people alive, one of them his uncle, and the others were all his cousins. They began to speak, saying how they'll live on with the families guilt, but it washed over Luis and he was barely able to hear it. He was tied up with his cousins and his focus was only caught when one of his cousins, Nate, attacked them. He wanted to beg to them to spare his cousin's life but his mouth was frozen shut. Turned out he didn't need to, Nate was thrown in with them.

He was blindfolded and cuffed, thrown into a van with the others. He passed out multiple times and when he woke up completely, he was in what seemed like a training camp. There were none of the modern weaponry, no guns or bombs, but there were swords and other similar tools. The man, who appeared to be a sort of leader, told them that they were to go from one end of a forest to the other. He was told that he was most likely going to die and was given the option to choose weapons, with mentions of hellhounds or some sort being in there. Luis had no idea what they were. He choose a few weapons and stayed close to two of his cousins who were also there, Nate and one other. Somehow the three of them survived the forest, though he eventually got separated from them. He survived through hiding and running away, rarely ever joining in with the combat. He saw people get ripped apart by baby hellhounds, harpies and other monsters. He learnt quickly, using the weapons he chose to fight his way through whenever he needed to. When he escaped, he was one of twelve, with both his cousins surviving, and it was here that his true training began. They were training with their chosen weapons, with Luis's being brass knuckles and a falcate, a type of sword use by the Carthage's in their war against Rome. He preferred hand to hand combat, though, often breaking into violent spurts, once killing one of the other twelve due to the beating he gave them. He was taught about the Greek world here, learning what the monsters they faced in the forest were. He was indifferent to it–it didn't affect him.

By the end of it, there were only six of the original twelve left, with Luis watching Nate kill the other cousin. By the time he was fifteen, he had finished training, occasionally being attacked by monsters and he found himself enjoying getting rid of them. However, those were the last things on Luis's mind. He enjoyed the monster fighting, they were sport. But the other part of his life wasn't. The missions. He was sent on them continuously. His targets ranged from the defenceless to the corrupt, he never chose them, it wasn't his place to. His mission was simple. Torture then kill. With the former, he was forced to do both physical torture and mental, and he found the latter more difficult to complete than the former. He rarely saw his cousin by this time and was forcing himself to forget Nate and his old life, his family, had ever existed. He was building up a wall and spent more of his time fantasising in his head than in reality. After a while, part of him never bothered to differentiate between them. He came to use a ring to drag him back, spinning it when he wanted to be dragged back to reality. When he was seventeen, though, something changed.

He was sent on a standard mission. His mission? Kill a family of twelve. He went through most of them with ease until he found the four year old daughter. He wasn't sure what it was that stopped him, maybe it was the small ukulele that was gripped in her hands that made him pause, think back to what he use to be like. He found her in the bathroom cupboard, clinging onto it, and he had a sense of deja vu, being brought back to being in the attic, clinging to his guitar. He couldn't do it. He couldn't kill her. She was too young for recruitment, but Luis wasn't going to put anyone through that anyway, the less of them the better in his opinion. He remembered getting up, his legs walking him out, his mind a dull haze without any thoughts going through it. He remembered walking for a long time. He didn't have any blood on him, he was careful like that, and it was only until he had to bend over with stomach pains did he stop for food and rest. He was in Australia, far away from where the Satsujin were, and by the time they realised that Luis wasn't coming back, he was long gone. Luis threw away everything that had belonged to him. His clothes, IDs, credit cards. Anything that could be used to track him down. He did withdraw a large sum of money, though, using it to buy new IDs and a plane ticket to America. He had heard of camp distantly on his travels, knowing it was where demigods went to train, though it always seemed like a myth, an urban legend, to Luis. However, knowing his time was running short and that he'd be found eventually, he made his way there and was soon claimed as a son of Oizy.

This character is connected to one of mine for a collab. I've read the history prior to the caim being posted so if anyone has an issue please IM me directly, Thank you.

This claim has been approved as a child of Oizys. You now need to make a page for them and a word bubble, if you aren't sure how to do this you can see the guide here. Once you have done that you can add your character's name to the cabin list located on the cabin pages and start role playing with your new character. If you have any questions feel free to ask a member of the Admin team.

"Music expresses that which cannot be put into words"- Musician