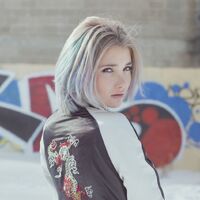 Weapons: Maristella had been presented with a pretty wonderfully crafted set of arrows and a bow made of Celestial Bronze. (from below, see history)

Maristella, or Just Stella, is a bit of a major airhead. It's not that she's funny or entertaining unless she's being the butt of the joke (which is common). Simply, she's an idiot, but an attractive idiot. While being easily convinced or persuaded, she's also pretty darn good at spinning everything around towards others. She isn't half-bad at making people think what she's wanting them to, whether it's the batting of her eyes or the flipping of her ever-changing hair (she's a fan of the hair dye). However, she's particularly naive in trusting or believing other people and for that she's often making friendships or relationships with all the wrong people. That, or she's just spreading herself too thin with a large basket of friends to maintain all at once. She's an extrovert, often plain and naive as she's befriending anybody in sight for the good or the bad. Perhaps, she's simply just being friendly while rocking a naturally bubbly personality. Yet, an often ditzy and clumsy girl, she'll be best known for her trademark incessant questioning and humming that's running through her often materialistic brain rather than her social skills. Secretly, she's talented and skilled, but she's just needing to realize her true potential to actually fill it.

Gioachino Fiscella and Aglaea, Goddess of Splendor and Beauty, were the parents of Maristella Phoebe Fiscella. It started with Gioachino, an Italian Broadway actor making it only as the most unimportant of extras there were. His life in both career and love had been failing him, for he was getting older without really accomplishing anything. It's this, paired with Gioachino's wearing attractiveness, that drew Aglaea to him. It all started with a surprising appearance at one of the cast parties that he dared to attend, before they started going out officially a few weeks later.

Her father and mother were aware of their rushed relationship, but they had just worked so perfectly together that he at the very least couldn't imagine being with anybody else. That's when, in hopes of blessing his heart with something more, they had sex and Aglaea became quite pregnant. Well, not that Gioachino was aware of that for she quickly vanished in what he assumed to be embarrassment. His ego was further crushed, but he continued working in shows to present himself with enough life to keep going. It was roughly five months later that he was slipping into his apartment to a sleeping newborn in a brand new crib.

After further inspection, it appeared that this was in fact his baby girl. Despite having her mother's glow, she had a freakishly similar look to her father, which had reassured him she was his. A letter of explanation had been pinned to one of the bows lining her crib, detailing what was to be known of Maristella. Gioachino remained offended, but raised his daughter all the same. There were a lot of different babysitters and daycares through her childhood, of which she had all considered to be her "new mommy" whenever one rolled through, but overall she was raised well.

A disastrous student and a shy kid altogether, Maristella (better known by then as Just Stella) had reached twelve years old when Gioachino blessed with her with the full story of her mother, Aglaea. After years of being told that her mother had simply abandoned them, which was also something the her father genuinely believed, she was informed of this ridiculous idea that her mother was a goddess. Stella simply refused to think of such, taking it as a fun children's game that she quickly joined in on. The idea of being the daughter of a goddess made her want to brag to her fellow students who doubted her, which led her to wonderful dreaming of that glory. It just happened that she refused to believe her father, until a few months later after her thirteenth birthday.

Maristella had been presented with a pretty wonderfully crafted set of arrows and a bow made of Celestial Bronze. Although Gioachino was the one to have passed it over to her, he had been visited by his love Aglaea and blessed with the gift of the weapon for their daughter. After hesitation, she started trying to become familiar with the device without actually using it on anything. It just so happened that she was really going to need to start using it, however, for she started getting visits from monsters. It was only then that she started believing what her father had told her those few months ago.

While sitting on the roof of her apartment building, toying with the bow and arrows with an obvious sense of boredom, a lone Harpy swarmed down towards her. Initially, she just screamed and ducked to hide under the lawn chair she had previously been sprawled across, but she was quick to note that wasn't going to work. After aiming a couple arrows towards its head and torso, they all fell off target onto the wings. However, that seemed to work in her favor as the Harpy spun to the ground due to lack of flight, before she fired a lost shot to the chest as it scraped its way towards her. It was a frightening and lucky experience, which caused her to run inside where the air conditioning could protect her.

It seemed that that would not be the last of those encounters, where she tried again to avoid actually killing or hurting anything else. There was a small swarm of Stymphalian Birds the next year, which she is still not sure she had truly defeated due to her only growing skill in her weapon. In fact, they had switched her to some New York homeschooling program which she begged for to give her more time for practicing around. Perhaps, it was a terrible idea to start fooling around with a bow on her own, but she seemed to get a hang of it quite quickly. Finally, Gioachino had enough with keeping Maristella there like that.

The day she was caught fighting off a Hellhound in their apartment building's small garden happened to be the last of it for her father. He had watched as Maristella killed an innocent animal, or what he would've considered such. A couple months later, around the time she was due to hit sixteen years old, he informed her of Camp Half-Blood. The fact that he was aware of such a place without taking her there previously annoyed her to bits and pieces, but the fact that she could go there regardless blew her little mind. So, it was quick that she packed some of the most materialistic and beautiful items of her possessions before she headed for Camp Half-Blood with her father.

So far, it's been a mere few days since she's arrived. It seems to be a lot of interesting people, but Maristella isn't quite sure how she fits in quite yet.

- your brains are made of gogurt and i hate your guts.

This claim has been approved as a daughter of Aglaea. You now need to make a page for them and a word bubble, if you aren't sure how to do this you can see the guide here. Once you have done that you can add your character's name to the cabin list located on the cabin pages and start role playing with your new character. If you have any questions feel free to ask a member of the Admin team.

Retrieved from "https://camphalfbloodroleplay.fandom.com/wiki/Claiming:Camp/Maristella_Fiscella?oldid=1787173"
Community content is available under CC-BY-SA unless otherwise noted.