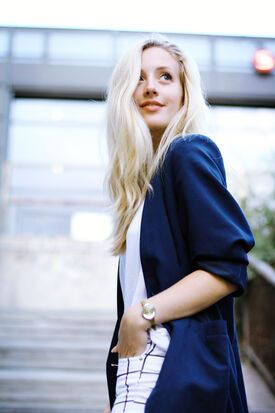 Appearance: Maxine has long light blonde hair and has brown eyes. She is at an average height and has slim body which is perfect in terms of posture. She is very beautiful and intimidating like her mother, Aphrodite. She has red lips, thin eyebrows and pale white skin tone. She is into fashion.

Personality: Maxine is a self-declared beautifully intimidating gal. She is a happy-go-lucky girl and is always confident in everything she does. She doesn't have any friends and prefers to bond with her family.

Parent's Meeting 15 years ago, Maximillion was browsing for a certain romance novel book in a local library. When he finally found the book, he was surprised to see a lady about to take it on its other side. He simply pushed to her the book then smiled at her after. The lady then sat on a vacant chair and of course Maximillion followed her and sat beside her. They talked and found out that both of them have the same similarities, likes and dislikes. The lady introduced herself as Anne. They talked and talked until it was already late, time for them to go home. Maximillion insisted Anne to drive her home since he has a car and she doesn't.

Days passed and both of them got closer to each other. They always meet inside the public library and together will read romance novels. One night, they slept in the same bed and what was about to happened already happened. The next morning, Maximillion found a note on the bed table that says:

Maximillion my love, Do forgive me for leaving you like this. I didn't regret what we did and you should be proud of it. I left for a reason. But remember this: Await my gift. Your love, Anne

Maximillion didn't know what he did to make Anne leave him. He blamed himself. After about 5 months, while Maximillion was watching a romance movie, there was a sudden knock on the door in front of Maximillion's house. He saw no one but instead saw a baby wrapped up in a blanket inside a basket. He carried it inside his house. Then suddenly, like a struck of lightning, he remembered Anne's farewell letter to him about the gift she'll give. He realized that the gift she was referring to was this baby. He smiled when he saw the baby smile too as she watches the romance movie still playing.

Early Childhood At the age of 7, Maxine already did home schooling instead in going to regular school because her dad do not want anything bad happen to Maxine because of her clumsiness. She was diagnosed of ADHD and dyslexia both on the age of 8. Since her dad is half-french, she personally taught Maxine some basic french words. Maxine never had a friend since then because of her dad treating her like a prisoner in a house.

She was 9 years old when she tried to escape once and go to the park where every kids in the neighborhood go and play. She met there a guy in a full coat, his face not visible. He was really suspicious and all but Maxine didn't pay any attention to him but instead played with the other kids. When she decided to go home for lunch, the mysterious man followed her on the way home. She walked faster then luckily heard the man's footsteps disappearing.

1 year after, someone moved in beside their house. There she met a boy about her age named Harry. One day when Maxine's dad was in his working hours, Maxine visited Harry to play. They've been very close since then and cannot be anymore separated. Harry acted like Maxine's older brother.

First Monster Encounter Maxine is already 11 years old when she a monster confronted her. She was on her way home from the market when Harry ran after her. He grabbed her by his hand then lead her to the woods. Harry said that something was chasing them the reason for her to look back and saw a weird faced lady with wings. Harry told Maxine that it was a harpy.

The harpy still followed them. They stopped for a while then Harry played on his reed pipe. Maxine already knew that Harry is very good at playing reed pipes. But, she was surprised to see the monster's running pace getting slower. Then, the music changed and now, vines were sprouting from the ground trying to trap the harpy. Fortunately, they were able to escape.

After that encounter, Harry already explained everything to Maxine. It all answered Maxine's weird encounters when she was a kid. He said that he would need her to go to camp to train and be stronger. Maxine do not want to be apart from her father that quick so he asked Harry to protect her for 3 more years. Harry then agreed. More and more monsters were coming up one by one in those 3 years. But, they were able to beat it thanks to Harry.

On The Way To Camp It was already dismissal time for Maxine's home school. She decided to go to the park since his dad now allows her to go outside. There she saw Harry, his lower body blocked by the bushes, feeling uneasy. She went to him then he quickly grabbed her then they ran to the woods.

The scene was too fast the reason for Maxine to not realize that Harry's lower part is that of a goat. Instead of legs, she saw furry goat limbs. While they were running endlessly across the forest. Harry still didn't told Maxine that he was a satyr, and so he explained again while they were on their way to camp. Harry gave her a ring which changes into a short CB sword for her keepsake and protection. Then he insisted Maxine to run to the end of the woods to reach the camp.

She already reached the end of the woods and there she saw a nearly visible camp beside a hill. She reached for her sword that Harry gave her. She then entered camp feeling safe and secure.

Weapons: A ring which changes into a short CB sword.

Why was she not attacked until the age of 15?

Already changed it. It's actually Maxine's 15th Birthday / On The Way To Camp. Harry holds off the monster and told Maxine the way to camp.

In case you haven't noticed, I changed the model.

Please elaborate on her first monster attack. What age was she? What monster was it? How did she fight it? That part is very vague.

She was 12 (middle childhood) when the first monster attack happened which she battled a harpy. I already added the part. ^___^ Thanks for the comment.

First, I already changed it from 3 years to 5 months since 3 years isn't acceptable. Second, the letter Aphrodite gave Maxine include information about the camp and it also stated that someone (Harry) will escort her there when the time comes. And third, they lost in touch with each other because Maxine does not anymore go to her school instead she is homeschooling to not attract monsters more. That's why Harry haven't led her to camp. But he came back on her 15th birthday. Any more errors?

She's home schooled sure, but you insinuate she's becoming quite popular as a young model, her photographs everywhere, that implies she's quite active in public and hangs around people who would probably have cell phones and internet which would increase the possibility of monster attacks. Also though fencing may certainly help, people don't train to fence to fight off monsters bent on eating people, so one attack with luck maybe, but multiple attacks just based on that would get a bit less understandable, as it wouldn't always be easy monsters.

M'kay! I already removed the popular part of Maxine. And about the fencing, I already changed it into his dad teaching her in using a sword and in karate. I stated there that his dad's addiction is into those stuffs. Kindly tell me if there are any more errors. ^__^

Okay so she went to camp when she was 11 and has been there for 4 years? we're not aloud to have chars gone to camp in the last 2 years. :/

Please fix the grammar mistakes, sometimes you refer to Maxine as a girl and sometimes a boy. In addition, please elaborate on what happened between her first monster attack at 11 and her current age of 14, why did it take three years to get to camp?

Well, I highly doubt that there is a community of any kind anywhere close to camp, so please fix that.

Camp's at the far end of the woods and I believe that there are no community near there.

How could her parents have met 18 years ago if she's 15 now?

Fixed. Any more errors? I just changed the model btw cause she fits perfect for my charrie.

This claim has been approved as daughter of Aphrodite. You now need to make a page for them and a word bubble, if you aren't sure how to do this you can see the guide here. Once you have done that you can add your character's name to the cabin list located on the cabin pages and start role playing with your new character. If you have any questions feel free to ask a member of the Admin team.

Retrieved from "https://camphalfbloodroleplay.fandom.com/wiki/Claiming:Camp/Maxine_Gregory?oldid=1335219"
Community content is available under CC-BY-SA unless otherwise noted.