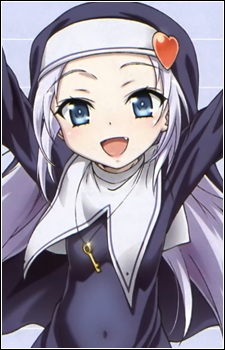 Personality: Very cheerful, outgoing, and childish. Doesn't like being picked on and is very religious.

Dislikes: people who don't believe in a deity

Weapons: Key pendant (necklace) that can be transformed into a CB sword

Parents meeting: Melanie Winter met Boreas when she was up at the North Pole, studying about snow as a meteorologist. As a meteorologist, she was very curious if there were different types of snow existing there. (Melanie is also a very religious person) At first, Boreas didn't like her because Melanie came off as mean. But when he spent more time together with her, he noticed that she's actually really kind. Boreas (as Thomas) went on several dates with Melanie and in those dates, he grew to love Melanie even more. Melanie and Boreas slept together the last date they had together. Melanie unsuspectingly got pregnant and bore Morana. Morana's hair is white because she dyed her hair like that at age 12 and liked the way it looked so she kept dying it white. Boreas left afterward because of the god's "can't see your children rule". But before he left, Boreas left a gift for Morana: a key necklace that can turn into a sword when forcefully pulled off.

Childhood: Morana's childhood was full of discipline for her. She acted very childish (and still does) and likes to get things done her way. She went to an all girl's catholic school because her mother wanted her to have a good education and to become a devoted Christian even though Morana was more interested on other religions (she was more fasicnated with the Ancient Greek religious ways). She wants Morana to become a nun in the future and to live the life of a nun. Morana grew to love the way of a nun. At her school, Morana would wear a habit when classes were over. Also at age 10 was when she was given her necklace from her mother (which was supposed to be Morana's but Melanie thought it was a memento from "Thomas" that was meant for her).

At age 13, she had her first monster attack. A Scythian Dracanae, disguised as a woman working as a clerk in a nearby store, watched her every move for she knew that Morana was a demigod (because of her scent. Morana was by herself (because the store was only one block away from their house) buying food for her mother to cook. The store was empty and therefore, made it easier for the Scythian Dracanae to attack her.She attacked her just as Morana was about to leave the store. Morana screamed and panic rose from her. She didn't know what to do and froze where she stood. Morana's necklace was swiped away from her neck and when it was swiped off, it turned into a celestial bronze sword. Something for Morana to kill the Scythian Dracanae. On instinct, Morana took the sword and slashed wildly at the Scythian Dracanae. After so many slashes, she got the Scythian Dracanae to disintegrate. Morana then ran back home in fear hoping that she'll forget it ever happened.

On her birthday, she had her second monster attack to her dismay. A hellhound followed her from school and all the way to her home. Morana was playing in her front yard and a stray dog (the hellhound) pounced on her. Luckily, she had her necklace on and she tore off her pendant and it turned into her sword. She slashed and slashed and slashed until it turned into dust. That night, her father spoke to her in a dream. He wanted her to become is priestess since she was very religious and knows that she would forever be a priestess. Knowing that this is a once in a life time opportunity, Morana agreed and Boreas in the dream told her about Greek myths and everything. He even told her how to get to camp half-blood. But Boreas didn't have all of the time and forgot to tell her that he was her father. The next day, Morana told her mother that she wanted to go to a special camp for nuns (lied basically). Knowing one day that her daughter would do such a thing, Melanie let her daughter go to this "nun-camp". Morana traveled by herself to camp but then came across a demigod who guided her to camp. Morana safely went to camp and eventually got claimed. This surprised Morana a bit because Boreas never mentioned to her that he was her father (which upsetted her for awhile but then shrugged it off). And apparently, the children of Boreas already knew that she's the priestess of Boreas because of a dream Boreas gave to his children so she was proclaimed to be the priestess of Boreas.

Camp life: She spends a lot of time at the Bethel praying to the gods and learning the priestess ways. she also trains in her swordsmanship when she has the free time. Morana also wears the habit as a acknowledgement for her mother.

I've always wanted a priestess/priest oc so i decided to have my other claim on hold for awhile. but it will soon be up after Morana has been claimed. (Hopefully)

12/5 note: heyz. so please do comment if you guys have any questions to ask about the claim! :3

Okay, for one there's no such thing as a weatherologist XDDDD. Scientists that study weather are called meteorologists. Why would Boreas not like her just because she didn't speak French? He didn't come from France (or Quebec) himself. O.O What made a ten year old girl make such a consequential decision at such a young age? Plus I'm pretty sure they wouldn't let anyone at a Catholic school wear a nuns attire for kicks. It isn't appropriate. Why would he ask her to be his priestess if she was extremely religious toward a whole different belief? Also, there isn't any training camps for nuns o.O. Nuns join orders and have to become valued members of the church. Regardless, why would she pursue such a goal at such a young age? Oh and something Bliss caught: Why would she be at the North Pole?"long and lost" ~~ Minx the Banshee

ahahaha thanks for the feedback (made me realize my stupidity XD) i changed her history a bit for the nun part. but im still making her wear the habit XD

her mother was at the north pole because she needed to get some scientific information on different types of snow in the north pole. (i'll add that in there)

and please do add more comments if you have any! :)

This claim has been approved as a child of Boreas. You now need to make a page for them and a word bubble, if you aren't sure how to do this you can see the guide here. Once you have done that you can add your character's name to the cabin list located on the cabin pages and start role playing with your new character. If you have any questions feel free to ask a member of the Admin team.

Retrieved from "https://camphalfbloodroleplay.fandom.com/wiki/Claiming:Camp/Morana_Winter?oldid=1217479"
Community content is available under CC-BY-SA unless otherwise noted.