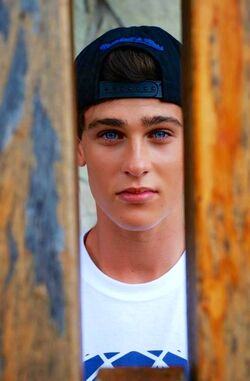 Personality: He is a pessimist, believing to see "the reality of things." He is morbid and has a sense of humor to match. N'kai is especially in love with irony. He is snarky and sarcastic, although not always, but is still not the friendliest person on the block. He enjoys alone time, but doesn't mind company, depending on who it is. He's bold and sometimes over estimates himself, believing he can take on anything, contradicting his pessimistic view on the world.

Valencia was a stunt devil for movies, and she was fearless. She was what you call an adrenaline-junky and a hot one at that. Dark wavy hair, sparkling blue eyes, and full lips; you can imagine how many men wanted her. Unfortunately for them, a man wasn't good enough for her; she needed a brave man. She wanted a man that could roll their eyes at the word "fear" like she did, and she got that man.

The man was really a god, and he told her up front. He didn't fear the consequences that may have come with telling her his identity, and he didn't fear the consequences that came with bedding her. She, of course, didn't believe that he was a "Greek God", but he proved to her that he was fearless. He had posed as her male stunt partner, although she didn't know this, and together they jumped out of a helicopter. He didn't scream, he didn't squeal, in fact he smiled.

Valencia didn't know if it was the smile that got her, or the fact that he did smile, but he got her; though, he didn't keep her. As soon as he discovered she was pregnant, he gave her a necklace that was in the shape of a golden key, and vanished. His sudden poofing, caused her to finally believe him, and to finally feel fear. She was also angry of course, but she was mostly terrified.

These questions ran through her mind the whole pregnancy, never stopping.

She ended up having to stay with an old friend named, Danni. After N'Kai was born, Danni would care for him most of the time, while Valencia worked. She was lucky that he company excepted maternity leave and as soon as she popped N'kai out, she got back to work. N'Kai grew up extremely, his mother wanting to keep her "hybrid son", away from other kids. She didn't know what he was capable of and didn't want to find out through some little kinder-gardener.

N'Kai grew very attached to Danni, the woman more of a mother to him than his own.Valencia tried to take as much work as possible, mainly to avoid her son, but to also care for him. Although she feared what he was, she still loved him. When N'Kai got older, he could see this fear and practically taste it; and for a reason unbeknownst to him, he loved it. When he made ten, his mother got cancer and was no longer able to pay for his home tutors, so Danni began to teach him. When he made 12, his mother died. It killed him inside, even though they weren't close, she was still his mother.

Danni tried very hard to keep him happy, although it was hard because he refused to leave the house. Instead, she would bring horror movies and video games, something he loved. This went on for a long time and before they knew it a year had passed. For his thirteenth birthday, he left the house with his "Aunt" Danni, to catch a new horror film. They lived close to the theater, so they decided to walk, and on the way their they were attacked.

A hellhound had caught N'Kai's scent and immediately hunted the demigod down. Danni, only seeing a rabid dog, stepped in front of N'Kai. "Run and call the police!" She ordered.

N'Kai wasn't stuck in place because he was afraid of the dog, he stayed where he was because he feared for his aunt. Unfortunately, it was too late. As soon as the beast launched forward, Danni pushed N'Kai back, causing her to be the one bitten. "Run!" She squawked, just before the dogs large teeth sank into her.

Almost immediately he was gone. He took off, he had a good head start against the dog as he ran as fast as he could back to the house, pulling his copy of the keys out as he went. As soon as he made it into the house he locked the door, having heard the foot steps of the beast behind him. A large bang hit the door, indicating he was right.Soon after dialing the police he heard sirens, and the beast seemed to have gone.

N'Kai went into the system, being sent to home after home, always wondering when the beast would come. The aura he produced made him thje first to go if anything came up, which something always did. Too many kids, behavior issues, not enough space, not enough food, and out with N'Kai. Due to constant relocation, and self isolation, he didn't get another attack until he was fifteen.

Final Attack and Arrival to Camp

Now, getting ready for school in his new "home" he went through the suitcase that carried all his belongings. After burying his aunt, he recieved some of her belongings, including some of the things that were given to her from his mother. One of those things were a gold necklace, with a bronze key.

He had to walk to school, something that he'd never done. Adjusting to school was hard, though getting rides made it easier, plus he wouldn't stay long. But adjusting to school, and having to walk was a pain for him. On the way another hellhound had caught his scent. He didn't know if it was the same one as before, but he knew what it was. He saw it as that damn rhino in 'James and the Giant Peach', the bringer of death. But this time, he wasn't scared.

The key necklace had begun to heat up around his neck, becoming brighter as well. He snatched it off, not caring about the chain, just wanting to get the thing off, and almost immediately it became a saw like sword. As the dog launched forward he swung, the movement coming naturally. The foolish monster not expecting it was killed in the single blow across the neck. Another kid, who had been watching N'kai from afar in the foster home, had been watching then. Rushing from behind the corner he'd been hiding behind, he revealed himself to N'Kai. He revealed not only his hidinbg spot, but also his identity, a satyr. He told N'Kai about CHB and convinced him to come, although the boy had been a tad reluctant at first.

They reached the place without an issue, causing the satyr to guess that the boy's god parent was a minor god. When they finally arrived, he was immediately claimed. A week later he made 16.

This claim has been approved as Child of Demios. You now need to make a page for them and a word bubble, if you aren't sure how to do this you can see the guide here. Once you have done that you can add your character's name to the cabin list located on the cabin pages and start role playing with your new character. If you have any questions feel free to ask a member of the Admin team.

Retrieved from "https://camphalfbloodroleplay.fandom.com/wiki/Claiming:Camp/N%27kai_Vrale?oldid=1469570"
Community content is available under CC-BY-SA unless otherwise noted.