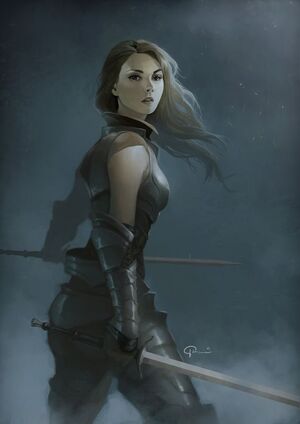 Personality: Naladæmon is incredibly servile and knightly; little else can be said about her. She (falsely) believes herself to completely lack free will, and will dutifully obey the commands of her masters. The only commands she refuses are those that contradict Plutus's own commands: to never let herself die, and to never touch her gem. She is prone to bouts of shame-induced depression when believing that she has somehow failed her purpose, but these incidents are rare and she can generally be counted on to be the perfect stoic servant. Despite her incredible age, she has never understood the intricacies of human society, and, lacking human desire or self-compulsion, she likely never will.

History: Long ago, outside a city whose name has been lost to time, a king unremembered by history prayed to the gods in desperation. The elderly king in his frailty and political insignificance had nothing to offer to them aside from his riches, which while tremendous by the standard of mortal men, meant little to the Olympians. His seven powerful sons would be no promise of return; on that forgotten day each of them stood outside of their father's coastal city with armies at their backs. The king knew of his sons' cruelty and had sent them all out to slay monsters, then barred the city gates to them as they returned. The king, unfortunately, was not wise for his years. His plan was to lock his sons from the city and instead abdicate the throne to the most loyal of his generals, but upon returning to his advisory council he discovered that his generals had left to join their favorite princes in sieging the castle by force. The king had none to turn to.

And so he prayed. He wished not for the deaths of his sons, or for the deaths of the hundred soldiers that joined them, or for an army of his own, for he was tired and ready to die. Instead he offered up to the gods all the riches he had left in exchange for a truly loyal partner to stand with him. For hours no answer came from the heavens. The king continued to pray as his sons stormed the city walls. The king continued to pray as they massacred the dozen men that remained in the garrison. The king continued to pray as his royal guard was slain outside his bolted door. At last, as the door to his chambers shook and trembled and his sons shouted curses through it, an answer came from below. The god Plutus took pity on the man and took his offer of treasure, creating in its place a gem nymph and a small black crystal. A whisper in the king's ear told him that the nameless nymph would serve any who held its stone. As quickly as he could manage he scrambled to the naked woman's side. She stood still, head bowed, unmoving. Not until he grasped the crystal at her feet did she speak: "I am loyal to you, bound by your word." The startled king smiled, tears in his eyes, and told his only true companion to kill him.

When the eldest prince at last battered down the door, he was greeted by the sight not of his father cowering on his pile of wealth. Instead the room held nothing but a naked woman splattered in blood and the decapitated corpse of the king. He ordered his brothers and generals to search the palace, stepping toward the scene alone. The woman did not move. He circled her cautiously, blade drawn, but evoked no reaction. The prince was equally perplexed and revolted. However, for the moment he was confident she was not a threat. He turned his attention to the dead king and checked his body, but the royal jewelry had been taken by Plutus. All he found was the nymph's crystal clenched in his father's closed palm. As he touched it the nymph spoke again: "I am loyal to you, bound to your word." The prince jolted, eyeing her with a hint of fear. When she said nothing else he asked her who she was, and she explained that she was a gem nymph created by Plutus in exchange for great treasures. He asked her if she killed the king, and she calmly said she did. The prince retreated a few steps and asked her why. The nymph explained that she serves whoever holds her stone, and had acted on the king's orders. The prince was shocked. He turned the modest crystal over in his hand for a moment, then made his decision: If this horrible creature was all that was left of his newly acquired kingdom's treasury, he might as well put it to use. And so she was ordered to kill the eldest prince's six brothers and the generals that had lead the siege. None should remain to contest his rule.

That night, the naked nymph returned to the king's quarters. The newly crowned king was shocked. He had received no reports of his brothers' deaths, but the nymph was indeed drenched from head to toe in blood. The job was done. Masterfully. A minute later his stunned silence was broken when a soldier burst into the room to inform the king that his youngest brother had been assassinated. A second soldier followed holding the youngest prince's body. The grizly thing was missing a head and both legs. The king looked from the nymph, to the body, back to the nymph, and then to the soldiers. No, it wouldn't do to have such brutal murders traced back to him. The demon, he decided, must be slain. Without hesitation he ordered her to kill the guards and run to the city square. She sprung to motion and threw the guards from the bedroom window, then fled after them. Once she was gone the king called for a guard and ordered him to mobilize the garrison at once to kill the woman who assassinated his brothers, claiming to have narrowly fought her off and forced her to retreat into the city.

The sun rose over the coastal city, daylight revealing its proud army of a hundred traitors reduced to bloody remains. The king confronted her at last in the city square, trembling hands on his blade. "You are sworn to me! You are sworn to obey me!" Why won't you do as you're told and sit down and die?! KNEEL!" The woman knelt, and the maddened king swung his sword for her neck. However, before the blade could connect, the nymph raised her own hand and a crystalline sword formed to intercept the king's blow. She did not move further. In protecting her own life, she would only kill those that were not her master. That rule had not been given to her by Plutus, but she had decided upon it herself. In her short life it was the only matter that she had decided on on her own. She didn't smile at the thought, but it did make her happy. That first emotion immediately gave way to a new one when the king produced from his pocket the small gem that held her life and swiftly made to throw it at the cobblestones. In a moment of panic that finally showed on her face, she yelped. Half out of concern for her own life and half out of an anger she didn't know she possessed, she threw her sword into the king's throat. The king fell back and stared at the quivering crystal blade in horror. She paid his screams and spasms no mind. Her eyes were fixed only on the gem that rolled safely out of his hand.

A travelling merchant that came to the city months later found it eerily abandoned. He had doubted the stories of the townsfolk fleeing from a monster, and paid them little memory. Had he remembered stories, he likely would not have taken the precious gem he found in the city square. Had he remembered descriptions of the "demon" that struck down the city's king, he likely would have immediately abandoned the gem when a woman exited a nearby building and swore to follow him. However, he did not remember the stories. And so it came to be that the gem, and its nymph, were taken from the city and sold to a new master, then taken by a politician that killed that new master, then taken by a thief that stole that politician's purse, then traded for food to a baker, then abandoned by the unnerved baker and taken by a smith's son, then taken by a city guardsman that found the beheaded corpse of the smith's son after he tried to kill the nymph. For three millennia the gem, and its nymph that eventually was granted the name Naladæmon, were exchanged in this manner, until they found themselves outside the borders of Camp Half-Blood next to the body of a young demigod and satyr that had not realized that she could have saved them from the hellhounds that killed them had they only asked.

Weapons: As a gem nymph, Nala can summon weapons and armor made of gemstones for combat. She doesn't actually have any possessions of her own unless you count her clothes.

As an aside to get some things out of the way early:

I have no experience with nymph claiming, especially gem nymph claiming (because they kinda sorta don't have powers yet), but I'm just popping onto here to say that this is the coolest claim I've ever seen and it reads like a glorious fairy tale. That is all

Ditto what Nata had said! C: So, to clarify the third point of your comment above, at the end of the history, Nala/the gem has yet to be discovered and taken within camp borders (so she's currently still outside of camp borders beside the body of the demigod and satyr), and she has yet to officially enter camp, right? (This is concerning the two weeks maximum length of time that an unclaimed character can already have been at camp.)

That is all at the moment and I look forward to approving this claim afterwards!

Yep! She and her gem are on the road outside camp, just waiting for someone to find them. Thanks for all the complements, you guys >u<

This claim has been approved as a gem nymph. You now need to make a page for them and a word bubble, if you aren't sure how to do this you can see the guide here. Once you have done that you can add your character's name to the cabin list located on the cabin pages and start role playing with your new character. If you have any questions feel free to ask a member of the Admin team.

Retrieved from "https://camphalfbloodroleplay.fandom.com/wiki/Claiming:Camp/Nalad%C3%A6mon?oldid=1742670"
Community content is available under CC-BY-SA unless otherwise noted.