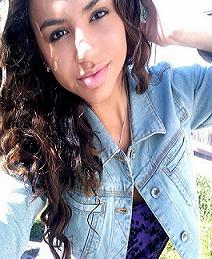 Personality: Nani is optimistic, kind-hearted, outgoing person. She trusts easily, and never let's a moment go awkward. She can be quiet sometimes, meaning she's in deep thought. Nani can be silly sometimes, but becomes serious when needed too.

How they met: David Kalu was a man of love and care. Where he grew up, they lacked both of those qualities. When older in his 30's, he had graduated from Medical School and went on a two month journey to Africa for missionary work. His plan was to treat suffering kids in the low neighborhoods to medical care. During his endeavor he met a woman, 'Anna'. She was visitng Africa on a missionary trip to supply clean fresh water to families. David and 'Anna' had so much in common and bonded over the course of two months. David being so in love with Anna, preposed the idea for her to return with him back to Florida. With out any doubt Heba agreed. Soon returning from Africa, David found out that 'Anna' was one month pregnant. Months later, she gave birth to a baby girl. One week later 'Anna' disappear.

Early Childhood/Etc.: Growing up, Nani was told that her mother was a beautiful and kind woman, and that she died in a car accident. This not being the truth, David did not want Nani to hate her mother for leaving them alone. Not having a mother didn't really fase Nani. Her father cared and loved her the best he could, and with that she was pretty happy.

After so many years in Florida, Nani and her father moved to New York where David would be supervising a cancer hospital there. It was all a big change for Nani. The weather, the people, the whole atmosphere. On Nani's 12th birthday, her father took her to visit the Metropolitan Museum of Art. They had enjoyed their time together spent. Nani needed to use the restroom. Her father escorted her and went off to talk to the Desk clark about group trips for his cancer patients. After finishing up, Nani heard a rattling sound outside. Knowing the door never opened and there was no one in the restroom when she came in, Nani was a bit cautious. Peaking through a crack in the stall she saw nothing. Letting out a sigh of relief, she walked out, only to be met by piercing, yellow serpent eyes. It was a Drakon.

Completely frighten, she ran for the bathroom door. Finding it was lock, she turned around, back pressed up to the door. The drakon slithered over to her, whipping Nani against a door stall. She yelped in pain. Nani attempted to stand up, but was whipped up against a mirror. Totally unconscious, Nani thought it as over. It wasn't until she heard a blood curdling scream. That's when she blacked out.

Nani was taken to a hospital in New York. Her father felt terrible for leaving for such a long time, and blamed the ordeal on himself. A year later Nani was attacked by a Laestrygonian on her way from school. Feeling a surge of energy race through her body, the Laestrygonian began to slow down and yelp in pain. Nani ran as fast as she could to get home, only to be met by a hellhound that made her stop dead in her tracks. The hellhound knocked Nani to the ground. Feeling her first encounter with a monster was luck, she knew this would defiantly be the end. With eyes closed shut, Nani waited her dreadful death. But instead, there was just a shower of monster dust in place of both the hellhound and Laestrygonian.

Nani couldn't believe what was happening to her. She cradled in her knees, and began crying near some bushes, hoping to be hidden. The satyr that had killed both of the monsters, and the one in the restroom, found Nani in the bushes. He offered her a hand. He explained what she was, what he was, and why she was being attacked. He explained that it was 'time' for her to go to her 'calling' at camp.Nani agreed, and the Satyr escorted her to Camp Half-Blood, where she would be safe.

From Nani never returning home,and David now knowing she was at Camp HB, he called the police for missing persons. To no avail, they never found Nani. Breaking the heart of David, who lost two important females in his life.

How did she get to 15 before having her first monster attack?

This claim has been approved as a child of Hebe. You now need to make a page for them and a word bubble, if you aren't sure how to do this you can see the guide here. Once you have done that you can add your character's name to the cabin list located on the cabin pages and start role playing with your new character. If you have any questions feel free to ask a member of the Admin team.

Retrieved from "https://camphalfbloodroleplay.fandom.com/wiki/Claiming:Camp/Nani_Kalu?oldid=1223957"
Community content is available under CC-BY-SA unless otherwise noted.