Current Age of the Character: 17 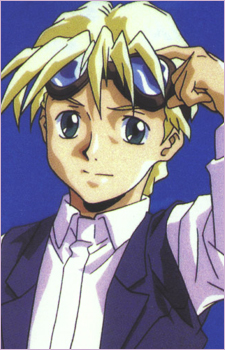 Personality: Nathan is an able-minded boy, and has the characteristics of a Reluctant Hero. He's somewhat afraid to have come into camp, but with his inquisitive mind, he understands that he has to be here, inorder to keep his family set.

History: Laura Roark was an advocate for the widespread usage internet, a rebel of her time. Her attraction to the idea of an internet that could be used at home, with access to thousand of pages of information at the hands of one person, brought to her the attention of a fellow advocate, who turned to be (insert god name here). The two had a short relationship, before he left, to pursue the growing Internet companies, and help them grow.

By the time Nathan Roark was born to his mother, she was a very happy, yet worn woman who loved her son very much. Her advocating days over, she was resigned to using the internet to merely look for information, like what she had wanted in the beginning. The two lived in a quiet little town just north of Manhattan. As Nathan grew older, his mother grew close to a teacher at Nathans high school, by the name of Stanley Jones. The teacher and Laura Roark began to see each other, and by Nathans 17th birthday, the two were engaged to be married.

Stanley, unlike many step-parents in the many forms of media that Nathan used, took a liking to young Nathan, even though Nathan was smart enough to realize that Stanley was not his father. Nathan and Stanley tried to overcome Nathan's reading disability, but it was in vain, as Nathan was still unable to read, due to the dyslexia he had inherited from his father.

Over the course of Nathan's life, he has had encounters with men who seemed larger than life, and dogs with more facial hair than a lion. However, Nathan attributed it to his wild imagination, and thought nothing of these encounters. These encounters started at the age of 12, when Nathan was first cornered by a man larger than any other man he had met before, and who seemed to only have one eye. He then went to see an man riding a horse with the horse's head missing, and various other strange creatures. These sightings had stopped for various periods at a time, and Nathan was convinced that they were just dreams. Until the wedding.

The day of the marriage, Nathan was walking around town, as he usually did, when a group of 4-5 harpies managed to wander into his hometown. The group rampaged through the town before seeing Nathan. Blind as to why they chose Nathan, the beasts charged at Nathan, prompting him to run.

The Harpies managed to tail Nathan no matter how far he ran. He managed to get it outside of the town, and soon, it spotted other demigods and chased them, leaving Nathan little time to make it back before the wedding.

However, at the party afterwards, the joyful times were interrupted by the Harpies again, this time with the Demigods on its tail. Nathan used his previous tangle with the beasts plus one of the demigods' weapons to take it out. The demigods were celebrated and invited to stay for food. Afterwards the demigod revealed that they were on a quest to slay the harpy and, claiming that Nathan was one of their own, asked him to join them at Camp, where they would see if he was a demigod or not.

Nathan turned to his mother and step-father, and asked if he could. Stanley smiled, and said, "If you think that you could be one of these fellows, go right ahead. I'll support anything you do, kid."

With that, at the age of 17, Nathan went to pack some clothes and was on his way to Camp. However, one night, Nathan wandered outside of where the others were camping and over heard the leader of the group talking to another one of their members. Nathan listened in on their conversation, and was horrified by what he learned.

It turned out that the "campers" were really members of the Broken Covenant, trying to use Nathan to get into Camp Half-Blood and infiltrate the camp as spies. Nathan, not knowing what the Broken Covenant is, only knew that they weren't campers and they were planning to attack the camp. Nathan was attacked soon after he found out, and a duel ensued with the leader of the defectors and Nathan. Nathan, due to his inexperience with the woldo, was overpowered the leader of the BC members, and re-captured. However, a group of demigods from the camp came, overpowered the BC members, and rescued Nathan. When the group arrived, Nathan was claimed as a son of (insert God name here).

Kindly sign this with four tildes (~). Also, I'm a bit confused. It says in your godparent choice that Themis (a female) is your first choice, but the history is suited for a male godparent. Am I correct in saying, then, that the claim you're making is for a child of either Prometheus or Hermes? If so, kindly fix the order of the godparent. Next, How was he able to reach 17 without any monster attacks? Kindly add in how the mortal parent met the godly parent. Take your time. I've got forever to wait -Demi ღ

Sorry about the lack of tildes. I believe because he rarely used the internet, as his friends live close enough that he didn't need to. If anything, I could add close encounters with monsters at certain ages, which he would attribute with strange men. I also added how the god parent met Laura Roark. Thank you for the help, ---It's all here, black and white, clear as crystal. 06:10, June 2, 2013 (UTC)

okay nice claim, but there's no way nathan could beat an experienced BC member. and how would he get to camp?

There is a way, through the careless arrogance of the BC mission leader who thought he and 3 other demigods could take on an entire camp of trained warriors. Would it not be plausible then to think that such an arrogant person could also severely underestimate an more inexperienced demigod? The locating camp problem has been fixed. Thank you for the help, ---It's all here, black and white, clear as crystal. 20:51, June 6, 2013 (UTC)

I'm sorry, but factions leaders are powerful. No matter how you reason, Nathan, who had no experience at all cannot defeat such a leader. Leaders are often protected as well. It would utmost be difficult. Also, above you mentioned a man 10x bigger than him. A cyclops cannot be that big unless Nathan is like really tiny. How was the team of demi-gods not able to kill one simply harpy? Also, please specify whether the nymph is a tree nymph or flower nymph. Please change. Thank you ^w^

How old was he when he reached camp?

How did he find out about the demigods being Broken Covenant members? And then kindly add into the history what his age was when he arrived at Camp. Take your time. I've got forever to wait -Demi ღ

Retrieved from "https://camphalfbloodroleplay.fandom.com/wiki/Claiming:Camp/Nathan_Roark?oldid=1223961"
Community content is available under CC-BY-SA unless otherwise noted.