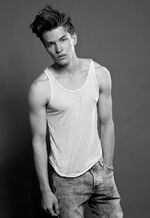 Personality: Nick is quite shy and bashful, quite unlike how one would probably expect a prince of the gods to act. He barely understands how to use his powers and is quite socially awkward. Nick is also very innocent, he will remain oblivious to the simplest dirty joke.

History:Marie Hawkins was a young college girl, she was quite well off and didn't have a care in the world. She was a mortal, but her half brother Kyle was a child of Hermes. Marie had went to a party, after being convinced by her friends to go.

A lil while later, she was somewhat drunk and abandoned by her friends. She was confronted by a large man in a blue suit, he offered to take her back to her dorm. After he did, the man made his move on her. Marie said no and pleaded for him to stop, but since the man was Zeus. One of the most sexually active gods around, he didn't care and wanted to enjoy himself that night.

She was impregnated and abandoned by the god, once the news got out of how she was with child. Marie was called a slut by most of her fellow students, even the girls she once called friends. Marie quit school and moved back with her quite well off parents and older brother. Her parents were quite upset, but Kyle was far more understanding to her situation. 9 months later, she had the baby boy and named him Nick.

Unfortunately, Marie's parents had gotten into a car accident when Nick was a few months old. Marie and Kyle got the estate and their leavings. Making it more than easy to raise a young baby boy. The Hawkins siblings had different ideas on raising a child, Kyle wanted Nick to be out and about. Making friends, having fun and being able to make his own mistakes and learn from them.

While Marie wanted Nick to be safe and protective, she got him homeschooling, a private cook and everything. She was truly a very rich and overprotective mother. So Nick grew up very sheltered and pampered, being very shy and bashful. The son of Zeus had no idea about how to defend or simply take care of himself.

When he was 11, Nick's scent had attracted his first monster. It was a Myrmeke that was easily slain by Kyle who was unaware of Nick's demigod heritage until now since the massive ant was targeting him rather than Kyle, since he was so young it was obvious Nick was a child of the big 3. Kyle explained to his nephew about how he was a demigod and how the Greek gods were real.

Nick was trained in secret by his uncle on how to defend himself from monsters. Due to Nick's frail nature, his uncle had his work cut out for him. Out of slight curiousity, he tried to figure out which of the big three raped his sister. He had a few other monster attacks, like a bad flaming horses attack when he was 12 or a rather bothersome telekhine attack when he was 13. But Nick was at least able to survive long enough until Kyle arrived. Also Kyle had tried tricking Marie into letting Nick go to camp by saying it would be a private school in New York. But his attempts were in vain.

After his 14th birthday, when Kyle had managed to call and seemingly command a whole flock of birds. Since he couldn't control the dead or breathe underwater, Nick was a son of Zeus, king of the gods. Nick was quite excited, finally gaining some courage and confidence which made his uncle happy.

Kyle would always tell his nephew about his time at camp and how someday Nick would be going there as well. Nick was very scared to go, never used to being around other teens. But as soon as Nick's overprotective mother could be taken care of, Kyle planned to ship him off to CHB so he'd be safe from monsters.

But one day when Nick was 15, Kyle had came down with stomach cancer and died. Nick was incredibly devastated at the loss of his uncle. The courage he had worked so hard to build up just fell apart. But with monster attacks still occurring, Nick knew he had to go to camp where he'd be safe.

He wrote his mother a note explaining everything, the note was stained with a few of his tears. He took his uncle's Celestial Bronze whip and ran off, after a day or two of barely managing to fend off monsters thanks to his training he was found by a satyr and brought to camp.

Weapons: Celestial Bronze Whip, along with a one-handed spear and a round shield.

Retrieved from "https://camphalfbloodroleplay.fandom.com/wiki/Claiming:Camp/Nick_Hawkins?oldid=1336300"
Community content is available under CC-BY-SA unless otherwise noted.