GODLY PARENTS: Themis/Eros/Ariadne (For this claim, I will make Themis her parent. But if she is claimed as Eros or Ariadne, I will change the history and all that)

Personality: Nicki is a loyal, caring friend who is always there for you. Since she was born in Britain, she has a smooth British accent. Generally, she is hyper and energetic, and loves dancing. She will stand for what is right, being the daughter of justice and divine law, but will stand down ONLY when she knows it's her only choice. She has a knack for humor and is known for making people laugh with her random, funny jokes. She always gets revenge if someone hurts her friends, and doesn't forget an insult easily. She only helps people if they really, REALLY need it, but sometimes she can feel guilty and help them anyway. But with her undying loyalty, endless wit, keen cleverness, and divine justice, she's a great friend to have by your side.

Appearance: Nicki's hair is a bright purple, since she dyed it that colour when she was seven. She has bright, intelligent gray eyes and is slightly pale. She smiles a lot, but when she's upset, her expression is a terrible sight. 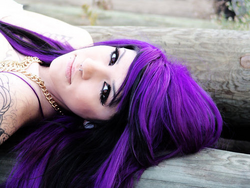 History: I was born in Great Britain on July 2, 1996 to a famous lawyer named Justin Bellefonte and Themis. It's pretty obvious why Themis fell for my dad. Lawyer-court-justice-no duh? Anyhow, he wa sone of the best lawyers in Britain, and went to court many times, and his clients always won the case. Of course, he is wise, and only helps people that deserve his help. This mightily impressed Themis, and I honestly don't remember the details of their relationship, except that they met at a cafe. I was nothing like my dad, who was strong, silent, and serious. I mean, yeah, I'm like that sometimes, but I was really, reeeaaaallly hyper. I even dyed my hair purple when it was October! But he still loved me, and I even got to go to court with him sometimes.

But when I went to school, I got bullied because everyone expected me to be like my dad. I was teased because of purple hair, and sometimes I lost it and I ended up in the principal's office, while my victim went to the nurse. Somehow, I was always able to convince my principal and teahcers that I wasn't guilty, and the kid who teased me was the one who committed the crime. Hey, if you're a daughter of Justice, you can be pretty persuasive. I was diagnosed with dyslexia when I was six, but ADHD didn't bother me. And I still read pretty fine. I stopped being bullied when I was ten, and that was when I became more serious and steadfast.

I became respected and popular at school, because people were finally paying attnetion to the person inside. They even admitted they were jealous of my colorful hair! SCORE! But when I turned eleven, I got a phone, which was a big mistake. I kept texting on it, and soon it signaled a monster. This monster turned out to be a monster crab, which I encountered while calling my bestie on the beach. Mortals saw an ordinary crab, but what I saw totally made me jump out of my seat.

Luckily, an older demigod goes to my school, and he and a satyr were tailing me when the scene happened. They saw me collapse (really, I don't think they can blame me) and rushed to my aid immediately. The mortals thought were lunatics, because they saw us attacking a tiny crab, but soon the monster disintegrated. I was brought to Camp Half-Blood immediately, and I recovered from my shock there. Camp has been my home ever since. Knowing my mother is the goddess of divine law and justice, she suits me pretty well, and I'm happy with camp life. I'm actually pretty happy i'm a demigod, because I'm somewhere where I finally fit in.

Why were the older demigod and the satyr tailing her? Embrace your inner lunatic (Fun times guaranteed) 02:36, February 3, 2012 (UTC)

It's sorta like the Titan's Curse, where Thalia, Annabeth, Grover, and Percy go the Westover to watch Bianca and Nico. Come with me.

She lived in Britain, but when the monster attacked her she was in Califoirna. Her dad thought she just went to a regular sumemr camp. Come with me.

This claim has been approved as a child of Themis. You now need to make a page for them and a word bubble, if you aren't sure how to do this you can see the guide here. Once you have done that you can add your character's name to the cabin list located on the cabin pages and start role playing with your new character. If you have any questions feel free to ask a member of the Admin team.

Retrieved from "https://camphalfbloodroleplay.fandom.com/wiki/Claiming:Camp/Nicki_Bellefonte?oldid=1223966"
Community content is available under CC-BY-SA unless otherwise noted.