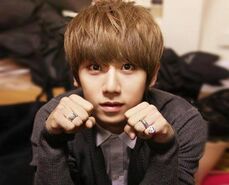 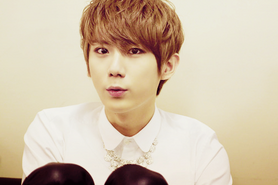 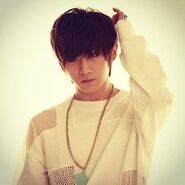 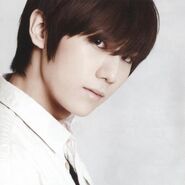 Personality: Oliver is a shy boy who tends to stay away from most people. However, he bonds very easily with other people who he looks up to. He is naive, kind, and selfless and would go out of his way to show his gratitude in someone by showering them in delicious baked goods.

Catherine was a quite famous model, always somehow catching the cover of a magazine or getting to act in the best of the best commercials. She was a very beautiful woman, which a very defined face that people found way too easy to look at. She was always humble and genuine - never allowing the fame to get to her head. However, she caught the eye of Eros - as he saw the beauty inside of her. For she was beautiful inside and out, as he claimed upon first meeting her in a coffee shop. Catherine was always cat whistled at, which annoyed her and so when this handsome gentlemen gave a genuine compliment, she felt herself blush. She always got flustered in his presence - wondering why someone who was so attractive would waste their time on her. She even asked him this question when they started dating, and he claimed that her beauty blinded him from seeing anything wrong with her - which he further insisted that there was not a single thing.

They dated for four months before Catherine found out she was pregnant. When she told "John", he seemed a little sad. Catherine would pester him on what upset him, but he would keep quiet and kiss her forehead. Eventually, it came the time that when the beautiful boy was born, Eros had to leave. Catherine was heartbroken and found it hard to understand why he would leave them when they just started their lives together. She loved him with all her heart and he just got up and walked off without much of a reason he would clearly state. He promised that he would one day return and explain his odd behaviour and sudden departure from her life. He gave her enough money to buy a decent sized land and a large house but Catherine was always too modest and invested in a tiny land with a small house - because she knew that the money could be used in the future. She named the little handsome boy "Oliver", because she had an obsession with eating olives while she was pregnant with him.

Oliver never exactly had a hard childhood, or one that was complicated. His mother and him moved from Korea when he was two, but they actively visited Korea every year and even spent four years leaving there when Oliver was five until he was eight years old. Oliver's first language is Korean and his second is English. However, he is fluent in both due to his active visits between Korea and America. When he was ten, Catherine moved him back to New York for a job as a model for various clothing and makeup stores. Oliver didn't mind too much, as the other kids normally ignored him in America because they didn't understand how a Korean boy didn't have a heavy accent and could speak English perfectly fine. They used to tease him, bullying him and telling him to go back to where he came from.

This tore down Oliver like nothing else in the world. He was a sensitive boy, always allowing his emotions to get the best of him. He also got tease for finding it hard to cope in school when it came to reading, writing, and staying still. The girls were the only kind individuals to him - as they found Oliver to be very cute and nice. This made the boys even more ruthless because of jealousy. He was picked on physically - they linked to give him Indian burns in his pale skin. The kids at his school loved to pick a fight with him, even though he was a shy, kind and quiet boy. When his mother found out what the kids were doing to him in American, she moved back to Korea with him to avoid this kind of torture.

When Oliver turned twelve, he noticed that weird things would go on around him. Simple looks he got and the way girls and even boys ogled over his body and his face was beginning to weird him out. It made him feel highly uncomfortable. Oliver even noticed how older women and men seemed to naturally strike up casual conversations, always bringing up how he was a handsome young boy. When he told them who his mother was, they all understood immediately. Even despite Catherine not being all that famous, it was natural that people knew even a little bit about who she was.

On Oliver's thirteenth birthday, he spent it with his mother in a quiet little hotel in the middle of town. He loved mother-son time and so he was fine with having no friends over for his birthday and so when she went down to the spa, he offered to stay behind and just watch tv in the room. Not even a half hour after his mother left for the spa, there was a knock on the door and a soft "housekeeping" that echoed into the room. He got up and put his robe on and opened the door with a friendly smile but what met him was something that wiped the smile right off of his face.

The woman seemed pretty normal in her uniform - despite the fact that she had wings and class and smelled of corpses. The harpy-maid swatted him back, causing him to flip over the bed. Poor Oliver was too scared to move and so when a girl who wasn't too much older than him burst into the room, he watched intently. The girl had bright red hair that flowed around her elegantly even as she beat up the maid. The last and final move that the girl preformed was a slicing motion with her sword, which almost suddenly appeared. Amanda, as she introduced herself to him, helped him up and showed him how her hair pin could turn into a sword. Amanda also told him that the maid was actually a harpy - a monster from Greek mythology out to kill him because he was a demigod.

Amanda was a child of Ares, and so it was impulse for her to argue with Oliver about him being just like her. She explained exactly who she was and that she was from camp half blood. Amanda was on a solo quest to get a weird-sounding goblet and return it safely to camp. She showed it to him and it glimmered in the light. It was the most beautiful thing he had ever seen. Amanda couldn't help but laugh at his childish wonderment. Oliver asked Amanda where Camp-Half Blood was and if he would actually need to go there one day. She insisted that he went back with her right away but he refused, speaking of how Catherine wouldn't accept this as reality. When Catherine returned with a bright smile that soon turned into a frown at the sight of the dead harpy, sword and goblet in Amanda's hand, Oliver almost busted into tears for her. He didn't understand how she would be able to take this all. All she said was "well then, it seems you now know."

The trust was that Eros had returned when Oliver was ten years old and told Catherine everything. She frowned down at Oliver and said sorry for never being able to tell him and also thanked Amanda for doing it for her and even saving her boy's life. Amanda insisted to Catherine that he came back to camp with her but Catherine wasn't ready to let her boy go and so Amanda left a camp to camp and fled from the hotel. Oliver never heard of her again.

From then on, Catherine enrolled him into basic sword fighting class to learn a little something and provided him with a celestial bronze sword that Eros had left for him. However, Catherine refused to tell him exactly who his father was and what god it was - as he had stressed to Catherine the dangers in letting him know too early. Monster attacks weren't that bad and mainly Oliver and Catherine avoided them until he turned sixteen. Finally, it took a year for them to come to their senses about Camp. One day before his seventeeth birthday, the pair encourtered an intensive attack that landed Oliver a lot of wounds, Catherine realized it was time for him to go to camp and so they followed the map Amanda had given him. They encountered a manticore just before camp and Oliver broke his sword when he killed the beast but he arrived at camp with only a few bruises and cuts. Catherine left him there and returned to Korea, stressing that Oliver visited once in a while. He agreed. Catherine told him who his dad was as a birthday present - because he turned seventeen the day he reached camp and she hadn't had the time to get him anything nice. She told him that his father was Eros but explained no further and he asked no questions and left her with tears of sorrow and kisses goodbye. When entering camp, he asked everyone about the Ares kid named Amanda. Everyone had sober looks and always avoided eye contact, saying nothing to him about his first good friend. When he finally got an answer out of someone - he was saddened with the news. Two years ago, Amanda had perished during an attack outside of camp borders. He sometimes pays tribute to her by dying his hair bright red.

Why did it take almost an entire year for them to get to camp?

This claim has been approved as a child of Eros. You now need to make a page for them and a word bubble, if you aren't sure how to do this you can see the guide here. Once you have done that you can add your character's name to the cabin list located on the cabin pages and start role playing with your new character. If you have any questions feel free to ask a member of the Admin team.

Retrieved from "https://camphalfbloodroleplay.fandom.com/wiki/Claiming:Camp/Oliver_Myung?oldid=1570488"
Community content is available under CC-BY-SA unless otherwise noted.