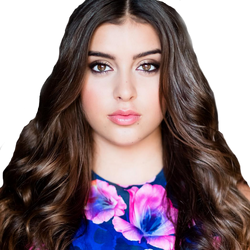 Olivia is overall very opinionated, sassy, fierce, outspoken, and blunt. She is known for her extrovert ways, feeling open to talk to many people without a doubt. Olivia has a passion for anything she is dedicated to such as modeling, dance, literature and photography. Her favorite thing is the idea of challenging and debating. She loves being ambitious and having harder challenges that drive her to accomplish tasks. Olivia loves debates because she can easily use information to her usage and present it as evidence, she also loves seeing new sides to a point and finding the different opinions of other people.

Ryan Skyes had a knack for brain exercises such as puzzles, mazes and more. It was his life's dream to explore the challenges of the world. After a few years of traveling, he set out to the Hawaiian island of Oahu to visit the world's largest maze in the Dole Plantation. With a bottle of sunscreen, a pair of sunglasses, a map, his pineapple shorts and of course animal crackers he set out and easily roamed the maze in an hour. Ryan then enjoyed the rest of the afternoon in the Dole Cafeteria, eating their famous pineapple ice cream. As he made his way to throw his scraps, he bumped into a women and knocked her treat onto a soduko book. After apologizing for her stained dress, his eye caught the book that he had already completed the prior month. They had an intense conversation about their passions and their love of puzzles, when they had to leave the women who introduced herself as Adriana left him her number in morse code in a post it note.

They spent a few months texting each other daily, starting from friendly hellos to exchanging flirtations. They then planned to meet at their six month aniversary in Honolulu, having the time of their life on the Waikiki beaches. At night, they drank too much and ended up making love in Ryan's hotel room. The next morning, he woke up with nothing but the empty presence of his girlfriend. Heartbroken from thinking that he wasn't good enough for her, he continued traveling the world in hopes of finding her again but a present sent was enough to fill the void. He was in his New York apartment, completing a book of word puzzles when suddenly a knock was heard. He got up and opened it, revealing a beautiful baby in a cradle. Her brown eyes matched his and he giggled, attached to her rattle was a letter addressed to him from Adriana. This letter contained an apology from her saying that she was a college student and was scared of confessing to her parents of conceiving a baby and that he should raise the baby to the best of his ability. Kissing her lightly, he named her Olivia after reading an interesting article about the origin of olives.

Trained as a child of Ariadne, her father gave her new challenges to accomplish which progressively made her more advanced in Math along the years. When Olivia was two, Ryan was in his office working when suddenly a women came out of the window. It was Adriana in the flesh, with her powers she quickly shut the doors of the playroom so that Olivia cannot see her. She revealed her true identity as Ariadne and told him about the real species of their daughter, a little about camp and the location. In shock, Ryan agreed and the goddess bestowed a set of throwing knives as a gift for Olivia as well as a sword. In a flash she was gone and he felt enlightened. School life was easy for Olivia, finding her way through the school was a breeze. By the time she was in fifth grade she was already doing pre-algebra. She made friends with the mathletes and debate team, becoming the president of the team in Middle School. When she was around 10, her father went on a book tour because his prize winning book on mazes and left her alone in their New York Apartment. This caused Olivia's independence to grow as she grew used to living alone and exploring the big Apple by her own, her father left her alone with just a maid who checked up on her once a week. But cooked, cleaned and did the laundry for her.It was easy to find her way in the city because she views NYC as a huge maze and knows where the exits are. Her favorite place to hangout was the Fleur Internet Cafe, a place where she drinks coffee and reviews her homework.

As she was walking home from a debate match when she was 13, after she came off the subway she walked a few blocks to in front her apartment when a pigeon stopped in front of her. Grabbing a bit of her garlic bread, she threw it to the bird who just ignored it and flew right in her face and it turned into a fearsome harpy. It swatted at her, destroying the fabric of her private school uniform. She blanked out and the doorman, Hugo saw her. Hugo was a seventeen year old boy who was the doorman of the apartment. He was a satyr and went to the Camp Half Blood for half of the year. He saw the girl on the floor with the harpy harshly picking at her. He grabbed his pen that transformed into a great celestial bronze sword. With critical hits, he sent the monster into ashes. He picked up Olivia and fed her a bit of his ambrosia, after years of fascination he finally concluded that she was a half-blood. He tucked her in bed and left her in her dream state. Hugo didn't bother to give her the full story because it was something that Ryan should tell her. Olivia woke up with a sense of fear, feeling like something happened but she was just in her room. She ignored the tight feeling in her mind and continued her daily routine. Her father came back from his international tour when she was 14 and asked what happened while he was gone. She did not want to hide the scary experience from him and told him, Ryan turned pale and immediately commanded her to pack away her items. In the dark night, they drove an hour to Long Island and he dropped her off in front of the path to Camp. He kissed her and explained everything, about her demigod blood, her real mother and about Camp, and finally handed her the set of throwing knives and the sword. She hugged him and made her way to the entrance.

Hey Kane! There's only a few issues though :)

hey kane only problem i have with the claim is why would the dad leave his 10 year old daughter at home alone? i know the maid checked up on her but still how did olivia like cook, clean, do laundry, buy food, or do all the other things she would need to do? Maybe just have the maid stay at the house while the dad is gone to clean, cook, and take care of Olivia

This claim has been approved as a daughter of Ariadne. You now need to make a page for them and a word bubble, if you aren't sure how to do this you can see the guide here. Once you have done that you can add your character's name to the cabin list located on the cabin pages and start role playing with your new character. If you have any questions feel free to ask a member of the Admin team.

Retrieved from "https://camphalfbloodroleplay.fandom.com/wiki/Claiming:Camp/Olivia_Skyes?oldid=1610786"
Community content is available under CC-BY-SA unless otherwise noted.