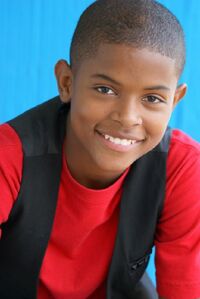 History: It was a horrible night for 24 year old Andrea Stone when her mother died from lung cancer. At the funeral, she saw a man that was handsome, and in an all black suit. After the funeral, she met the man and they agreed to meet again soon. They went on multiple dates and the rest is history. Hades came one last time and gave Andrea a necklace that turned in to a Stygian iron sword, called Asphodel. He told her about their son needing to go to Camp Half-Blood at around 11 years old with a boy named Aleksander. Then, he left. Andrea always had those memories of Hades.

Eight and a half months later a boy named Orpheus Stone enters the world. He is born perfectly healthy, but troubled and with dyslexia and ADHD. He is lucky enough to stay in one school, LA Academy for Troubled Boys. He meets his only friend, Aleksander Smith. They travel through the grades, and run into a few small Cyclopes along the way. Somehow, Aleksander manages to ward them off. Andrea gives Orpheus the necklace, but informs him not to touck the small gray button on the back.

In 5th grade, things start going south. Aleksander and Orpheus get into a huge argument about Greek mythology, which they've been learning in Social Studies. They aren't friends anymore and they slowly drift away from each other. Also, Orpheus is a straight-A student while Aleksander is in ISS every other day. Now that Orpheus is alone, his grades are rising and he is the top student in the class. On the last day of school, Orpheus goes home to his mother's house and lives another day. As he starts to fall asleep, a gem appears in his bed. Then Aleksander appears, knocking on the window. A storm was approaching.

They quickly travel to NYC after informing his mother by flying a plane. They land in NYC where 3 harpies are chasing them. They hop in a cab and Aleksander tells Orpheus to press the button on the necklace. He does and they hop out of the cab and barely defeat the harpies. They get back in and ride to Half-Blood Hill. They get there and cross the borders. Alexander the Great greets them and Orpheus settles into the Hades cabin. He has currently been at camp for 5 days.

Although this is a WIP, there are still several things you need to work on before we can claim this character.

Thanks for your hard work! The claim is much improved and has been placed in the next category, which means you're one step closer to being claimed. There are still a few things you can edit before it's ready :D

I have to say nice claim and its about ready to get claim all it needs is a mention to how long your char have been on camp... I'm super sorry for being nit picking but on camp we have a rule that a char may only stay for 2 weeks (for full time that is part time you can come and go as you wish) and his picture doesnt look like an 11 year old... again sorry for being nitpicking >,< forgive me

Congrats young one you have been very patient with us thus with that I give you...a demigod..

This claim has been approved as Child of Hades. You now need to make a page for them and a word bubble, if you aren't sure how to do this you can see the guide here. Once you have done that you can add your character's name to the cabin list located on the cabin pages and start role playing with your new character. If you have any questions feel free to ask a member of the Admin team.

Retrieved from "https://camphalfbloodroleplay.fandom.com/wiki/Claiming:Camp/Orpheus_Stone?oldid=1628864"
Community content is available under CC-BY-SA unless otherwise noted.