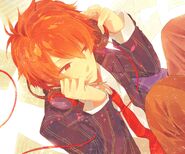 Personality: Otoya is a genuine and outgoing boy who loves the company of others and always wants to ensure their happiness. Unlike others he is very protective over his loved ones but not to the point where it gets possessive, he just doesn't want them hurt.

History: Rene used to work at a sea side cafe which was a couple of minutes from her beach house where she happily lived alone. One night a young man came in, alone and around Rene's age. They both started talking and got on really well together eventually resulting in Palaemon accompanying her back to her house. Due to the amount of alcoholic drinks the two of them had drunk that night, they slept together. In the morning Rene found Palaemon had left in the night, leaving a note with one word on, "Sorry".

Rene thought nothing of it, just another one night stand, and she continued her life as normal. But after around two months she found out she was pregnant. She was of course shocked at this and was also worried as she had no idea who the father was. She continued to work at the cafe, saving up money for when she would have to quit work. Eventually Otoya was born and to get extra money Rene rented out her surfboards to the public for a cheap price.

When Otoya was at the age of nine a strange man entered the town and started up a small club for kids to learn how to do archery which gave Rene a chance to take up her old job again. Rene made Otoya join because she wanted him to know other skills as well as surfing. And Otoya happily continued doing archery for another five years until one day, when Otoya was doing some private training with the man, a fire-breathing horse burst onto the beach.

Otoya instinctively raised his bow, thinking it was one of the trainer's tricks until he saw the destruction it had caused and the murderous intent is its eyes which were fixed on him. The man tossed him an arrow which had a different tip to all the others he had used and screamed at him to shoot it. Otoya did so and it hit the horse right in the head. Then the man grabbed him by the arm and dragged him to his car. The man said that Otoya was in grave danger and that he would explain in the car. But Otoya ran to his house, saying he had to warn Rene. Once there he found that Rene was at her job and so he wrote her a letter with his quivering hand and fled the house to the car. The letter had only one word: "Sorry".

Once in the car the man, who was in actual fact another demigod explained everything to him and where he was taking him. Luckily the pair only encountered another monster when they were almost at the camp. This was a hellhound but couldn't catch up with them in time and they safely entered the camp when Otoya was the age of fourteen.

How old was he when he had his first monster attack?

If he shot the horse, was the arrows CB or not? If they weren't CB, it wouldn't have killed it, which means you need to add a few more lines of they have outrun the horse by car, or something :)

Yep it was Celestial Bronze because the satyr told him to use that instead of the normal arrows. Rainbow Shifter 10:14, July 27, 2013 (UTC)

Could you kindly state his age upon arrival at camp in the history?

I think the archery teacher should be a demigod as opposed to a Satyr. A Satyr has official duties and wouldn't be able to just spend 5 years teaching a kid archery even if he knew Otoya was a demigod.

This claim has been approved as a child of Palaemon. You now need to make a page for them and a word bubble, if you aren't sure how to do this you can see the guide here. Once you have done that you can add your character's name to the cabin list located on the cabin pages and start role playing with your new character. If you have any questions feel free to ask a member of the Admin team.

Who's that lady? That foxy lady? Wait...Nevermind it's just Astrid!

Retrieved from "https://camphalfbloodroleplay.fandom.com/wiki/Claiming:Camp/Otoya_Sairk?oldid=1224263"
Community content is available under CC-BY-SA unless otherwise noted.