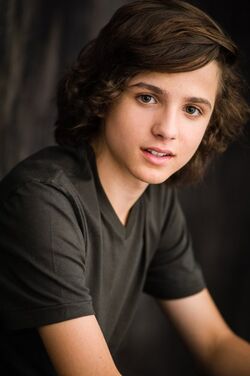 Personality: Owen is shy and kind of quiet at times. Once in awhile, when he feels like it, he'll open up to certain people he likes, but usually that's rare. He easliy blushes and stammers a lot when he's nervous. Owen can also get jumpy if people try to scare him (which he does not like).

Weapons: celestial bronze sword that can turn into a silver necklace 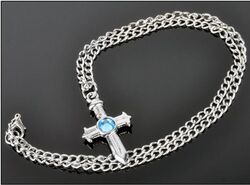 Parents meeting: Jamie Smith is a demigod, a daughter of Eros who can just charm anybody. One day, Hermes was in a bar and there, he met Jamie. She looked so beautiful to him he instantly fell in love. Hermes had way too many drinks and was drunk but he knew that she was meant for him. Hermes (who said he was Justin at the time) flirted with Jamie all night and the two then got in bed with each other. They made love and after that encounter, they went out. Hermes decided to tell Jamie who he really was and Jamie wasn't shocked to hear that because she is a demigod herself. Seeing that she wasn't shocked, Hermes got confused and then Jamie told him that she was a daughter of Eros. Hermes then understood why she didn't freak out (like most mortals would). But after a couple weeks passed, Jamie found out she was pregnant with Owen and Hermes went back to Olympus. Jamie knows why though and after she gave birth to Owen, Jamie raised the child by herself.

Childhood: Owen was very shy. he liked to keep to himself and wasn't really outgoing. He was always in his room playing video games or reading books. He didn't have that many friends and most of the time, they were hanging out with their other friends. He's never the basketball star or the captain of the football team. He was more like Captain of the Nerds. (Side note: And when he was 15, he found out he was gay.)

Monster attack: He was 13 when he had his first monster attack. A hellhound attacked Owen in a park nearby his house. Fortunately, his mother was there to protect him. Having her sword with her at all times, Jamie took her bracelet and it transformed into a celestial bronze sword. Jamie battled with the hellhound for a couple of minutes, and then it disintegrated. From that point on getting concerned of his safety, Jamie practices with Owen at least 2 hours every day (they trained on Owen's swordmanship).

Monster attack aftermath: Owen's life then became dull to him after his first monster attack. He had several others, like the harpy he disintegrated when he was 14 (by himself since his training payed off) or the Empousai he and his mother disintegrated when he was 15. But after that, it was bleak and dull. Right before his birthday though, he had a Myrmekes attack him when he was driving home. It trailed him down to his house where his mother stepped out to see all of the commotion that was disturbing her. Jamie then morphed her bracelet into her celestial bronze sword to help her son defeat the Myrmekes. It was a tough battle and it took them about 15 minutes to disintegrate the monster but they did it in the end. Jamie then knew it was time for Owen to go to camp. They packed up his things, and drove down to Long Island (they were close by) to drop off Owen where he said his goodbye to his mother. Luckily for them, there were no monsters that attacked on the drive there. From then on, he stayed at camp, never coming back home.

Was there no monster attack just before camp? ✔

yup. no monsters. oh i should add that in the claim

How old was he when he arrived at camp? ✔

Just why didn't Jamie took him to camp after the first monster attack? ✔

Jamie thought she didn't need to since she was training him herself.

This claim has been approved as a child of Hermes. You now need to make a page for them and a word bubble, if you aren't sure how to do this you can see the guide here. Once you have done that you can add your character's name to the cabin list located on the cabin pages and start role playing with your new character. If you have any questions feel free to ask a member of the Admin team.

Retrieved from "https://camphalfbloodroleplay.fandom.com/wiki/Claiming:Camp/Owen_Luke_Smith?oldid=1229610"
Community content is available under CC-BY-SA unless otherwise noted.