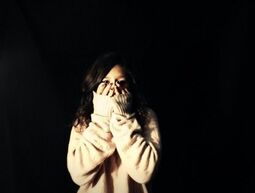 Personality:She’s a loner always keep to herself. And if you give her your attention she would always doubt it as she has gotten use to people picking her twin rather than her. Pamina is very much a dreamer often liking to make stories in her mind. Everything that happen to her she would always make it into a story. Because her mom would always worry about her she have mastered the fake smile technique and is quick to brush things off even if it bothers her. She would often keep things inside and let out her feelings through her characters. Her social skills is the worse as she isn’t the kind to talk but is a great listener. She’s kind and considerate and is very loving not liking to show it off but to those that know her well enough would be bless with her kindness and creativity

History:Jacquelyn was a beautiful daughter of Hebe married to Jake wonderful son of Melione and both were happy bless in their marriage. Life for them was grand but when their marriage went into the 5th year things begin to get rocky with Jake’s business going into rough times. This led too many problems which put a strain in their happy life. Soon not being able to withstand all the pressure Jacquelyn went to a bar to where she met Morpheus. They exchange drinks as Morpheus heard her problems and before they realized it they had a one night fling. A few days after the night Jacquelyn husband came back to her and she forgot the one night fling as both husband and wife begin to reconcile.

Jacquelyn never thought the fling she had would matter till she got pregnant and confess it to her husband. He forgave him as he himself has his fault and as the due date came she gave birth to twin girls Pamela and Pamina. She thought both were her husband but she was half right for one was her husband’s child while the other was Morpheus. Both grew up normal in the loving family with Jacquelyn being a stay at home mom caring for the two. Ever since birth pamina was always different from her family as when pamela shine in everything she put her heart into Pamina was always the one in the sidelines. This was so from the start of school till now. Many would think their relationship toward one another was bitter but they were the best of friends where they share many things together but pamina was unaware she was being abuse by her twin.

Pamina being often in the shadows never thought she was special until she was 10 when she met up with her first monster. it was a normal day picnic for the Clayton when a group of harpies managed to sniff her out. Both her parents being demigods easily defeated the harpies and neither one realized that the harpy picked up her scent as they thought they sensed them and not her. Ever since then she began to see monsters and some even tried to attack her but she was lucky as most of her monster attacks was defeated by her parents. That is until she was 15 when a Cyclops found her. Being young and never having training she did the logical thing..Run. And lucky for her, her teacher a child of apate managed to fight the Cyclops off. Soon she realized that mina was a demigod thus went to meet up with her parents telling them of the fact. Her parents were of course shocked but both agreed to send her to camp for training. Before they left both her parents gave her a gift. Her mother gave her a bag full of daggers while her father gave her a pin being able to turn into a shield and soon after being claimed she was given a gift from her father which was a pen being able to turn into a sword made from celestial bronze being left on her bed by her real father

Weapons:A pen that can actually turn into a sword made from celestial bronze

You current have a total of four active claims, you may only have one active at once. As such this claim will be placed on hold until Claiming:Camp/Suzaku has been claimed/approved.

This claim has not been edited for 6 days. If it recahes 8/23 with no edits it will be deletd for inactivity.

Please fix the general grammatical and spelling errors in this claim. I'm fairly sure it's impossible for twins to have different fathers, trying to think of a way it could even work is doing my head in >.< Could you please detail her attacks until she was fifteen? How did she get to camp? Who gave her the pen?

but it is possible for twins to have different father it says so here http://en.wikipedia.org/wiki/Superfecundation its just very very very rare...and I changed my claim (sorry if my spelling and grammar is still bad its like midnight here >,<)

I have had multiple sources tell me this claim is perfectly fine and the only issue being grammatical errors which isn't the biggest issue to be fixed in any claim. Therefore if anyone has any issues with me claiming this they can come to me.

Retrieved from "https://camphalfbloodroleplay.fandom.com/wiki/Claiming:Camp/Pamina_Clayton?oldid=1455200"
Community content is available under CC-BY-SA unless otherwise noted.