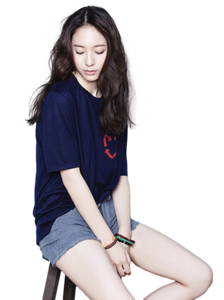 Name: Park "Alice" Seung Ha
Age: 17
Mortal Parent: Park Ryo
God Parent: Hades
Siblings: Park Jo (Little Brother - Deceased)
Model: Krystal Jung
Personality:Alice breaths with music, this is something that she shall not live without. She is considered an expert in few instruments such as Piano, violin and guitar but most particularly she is more attached to piano. She's a person whom will choose to keep quiet rather than opening her mouth. on the other hand she is kind and soft-hearted, she cares about what other feel and think towards her. She is consistent when it comes to playing an instrument whether it is inside a theater or not, she'd always choose classical piece over a hundred of pop pieces. There is a limitation on her kindness if she ever reaches it, things won't be the same between you and her. She hates only 3 people in her life and that is mother, poseidon and hades *see history*. She sucks at lying, she easily laughs at everything and she is always having a hard time suppressing it on ther other hand she's also someone who easily cry. '

Park Ryo 27 years old Lead Vocalist in one of a famous Rock Band in Seoul Korea. After her breakup with her recent boyfriend she went out all drunk and met a guy whom she doesn't even know, She doesn't have any idea that it is Hades/Zeus/Poseidon as Ryo is drunk they had a one night stand together. The next day she woke up by herself in a hotel naked nothing was left just her clothes. She thought everything would be okay but weeks later she showed symptoms of being pregnant, she took a status of Hiatus on her band because she knows that if she stays longer the media would notice. The media did noticed but it was all just a rumor and it didn't go all around because For her career, she stayed in her parents' house and never left, working as hard as she could . After 9 months she gave birth to a girl without her full knowing that it is a demigod. She named it Park Seung Ha, Ryo gave Seung Ha to her parents for Seung Ha's guidance. 2 months later Ryo came back with another baby whom she adopted and named Park Jo Su he's about 3 months old when Ryo found her and kept Jo Su under her wings without her knowing that Jo Su is another Demigod, a Son of poseidon.

At young age (6 yrs old) Seung Ha's grandparents decided to make Seung Ha and Jo Su a musician and she learned the piano and her brother the Violin. Seung Ha's grand parents were strict persons that she learned and became a great musician because of the expectation and high hopes that she has to fulfill and that is obviously the same with Jo Su. Not a month longer they participated in different galas and competitions and won again and again by being faithful to the score. Every each year they grew to be more known on the classical music industry and Seung Ha and Jo Su both at the age of 10 is when the siblings was given a screen name as 'Park Alice' while her younger brother is known as 'Park Joe'.

Since the siblings were always together and both was a demigod that belonged to the big two their scent were strong to different kinds of monster. Hades sent a satyr for Alice as a personal maid for the family and knew that Joe was Son of Poseidon which made him feel betrayed but he doesn't know the truth that Jo Su is only adopted. The siblings (both at the age of 10) had a Gala to attend at Incheon and Alice was Joe's accompanist, this is when the first attack was made, After the gala concert they went straight to their school's event which includes hiking and camping on Incheon with Yuri the satyr whom was their care taker, at the middle of the night Alice went out of her tent when she saw a light not that far from their camp site. Intrigued by it she walks through the source of light which turned out to be a sleeping single fire-breathing horse, before it could have seen her she quietly climbed upon a tree to keep safe but the branch she stayed on was too weak that it made her fall onto the ground leaving her a wound that would make a scar on her thigh 2-3 inches long. The monster woke up with a wounded Alice on it's view, Alice stood and ran for her life until she was out of the beach shore. She swims not that far from the shore thinking that the monster was fire and that it couldn't get into the water but it made her case worsen because her wound was badly aching because of the salt water. She thought she made the right choice but the horse didn't leave her, before she could have even sleep at the salt water an arrow hits the monster killing it with an ease and it turns out that it is their caretaker Yuri.

Yuri treated Alice's wounds and scratches before going back to their camp site by the dawn but when they came back Joe was gone they went back to Seoul and knew that Ryo her mother is actually missing too. Yuri decided to take Alice to camp for a while her grandparents agreed on sending her to america using the reason that she has a international competition to participate to. After a few years later (she's at her 15th) without any news from her brother but she had one from her mother who will have a concert on America which means that she came back. Alice stepped out of camp and tried meet Ryo but she Ryo refused to meet her. Alice came back to camp confused and clueless so Yuri spoke out, Hades took the opportunity when Alice was cornered on the beach and kidnapped Ryo and told Joe that Hades would be waiting for him in the underworld, Joe did with another Satyr as a companion and met Hades. Hades offered Joe a deal that if he exchanges his life with his mother's then Alice would still live with a mother. Joe took it without thinking twice which made Poseidon angered he ought that Alice his Daughter would always despise and hate Hades it is the same with Ryo, Poseidon ought that Alice would never see Hades as a father to her and would always be humiliated to say that she is a daughter of Hades. Alice will also not have any traits that as any Hades Kid would have. Alice knowing this made Poseidon's ought come to reality. Even though she doesn't have a choice but to stay in Hades' Cabin she wouldn't reveal that she is one.

Alice became distant and cold to her half-siblings and also to Yuri who all along knew everything about what had happened to her brother. This cause Alice great grief and left the camp for a few years continuing her life at the music industry competing with different players and winning over and over again, this time she's never faithful in the scores but she plays it on the way she wants to, she always offer every piece that she plays to her younger brother and loved "Love's Sorrow" by Kreisler piano piece arranged by Rachmaninoff. On that year only one monster attack occurred which she just escaped by shadow traveling. In her next year she was nearly pounced by an hell-hound in the forest again but it was Yuri who saved her and took her back to camp.

This claim has been approved as A daughter of hades. You now need to make a page for them and a word bubble, if you aren't sure how to do this you can see the guide here. Once you have done that you can add your character's name to the cabin list located on the cabin pages and start role playing with your new character. If you have any questions feel free to ask a member of the Admin team.

Retrieved from "https://camphalfbloodroleplay.fandom.com/wiki/Claiming:Camp/Park_%22Alice%22_Seung_Ha?oldid=1538626"
Community content is available under CC-BY-SA unless otherwise noted.