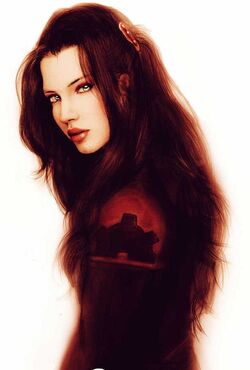 Personality:
If there’s one word to describe Payton, it would be tricky. Even as a child, she exhibits deliberate deceit and deception which she finds very amusing. But she’s also helpful in any case if she’s in the mood but if she feels negative towards the person whom she helped, that help would always have a sting in the tail. She’s a trickster at heart. Even so, Payton is very sly and at the same time, clever. Everything she does, it’s always up to no good. Many people had impressions of her being eccentric and merciless. She’s often misunderstood that makes it all the more reason for her to make things worse for them. Payton is as well easily bored.

History:
My father’s name is Samuel Freiretaille of Los Angeles, California. But when I was born, we moved to Ontario, Canada to start anew, near the McLairds. There, I met their daughter, Felicity McLaird, and later over the years as childhood playmates, I found out we share the same ‘curse’ and that’s what brought us closer together. Whenever I ask Dad why we moved, he often replies, “The house in LA is full of painful memories,” Of what, I don’t know.  And that is until one night after thirteen years of wait.

I was half-awake that time. There were hushed voices behind my bedroom door – men and women. Curious, I got up and try to hear what they are fussing about but couldn’t extract much. I only managed to get the gist of what they were talking about – Felicity and me. The men’s voices I can identify, my Dad’s and Felicity’s but the women? No idea. But from the tone of their voices, it was urgent and harsh at the same time like regret and anger under control. And there were silly words like, “You’re a goddess! This was your fault, how could I know?” And at that time, I shook my head and began to think that it was just all a dream and went back to sleep.

The next day, I talked with Felicity and told her my ‘dream’ that seems quite real last night. She hesitated as if trying to contemplate whether I am lying or trying to trick her into believing it again and make fool of herself like I do to her occasionally like her fifteenth birthday that day. She just fell silent and I assume she knows something I don’t but before I could say more, her father told her to help him with something. That night, she told me that they’re going on a vacation somewhere in New York which was a last-minute goodbye. They went away and I stayed behind completely lost. I had no one else to talk who knows how I operate, not even my father – a renowned magician in a popular circus of which he quit. And that was the time when I told him what I heard the other night. He looked troubled and when I finally knew that he knew something that I didn’t as well. I hate secrets. So he told me a tale, a true romantic tale of how he and my real mother met. And it all started with the circus.

She was amazed by his skills, he says. How almost believable he was to have magical powers through illusions and so, they fell in love. He treated her with flowers, chocolates and a few tricks that impress her. Months later, I was born. Then he told me of how the child was born. It was a ‘he’ as he says it. Then she left without a trace. After searching for her for nearly two years, she felt pitied and came back and that was the time when a ‘she’ was born. She later revealed she was a goddess and told him some things to keep in mind because of his desires. It was hard to convince him for she, herself, can be a pretty good liar. But in the end, she won and has to leave. It took me a while when I knew that what he was talking about was my birth and that I had a brother. He explained to me the monsters and camp but I asked him where my brother is now and how come he didn’t live with us rather than not believing his tale wasn’t true. And he replied with silence.

With the circus and all, I assumed my mother to be Hecate after finding out her name as my father began to read me books of mythology and how creepy it was to find out how all of it slowly comes alive from the pages. I was attacked when I was alone by a harpy in disguise near an abandoned warehouse. I killed it in a silly way – shoving down the spiked bronze bracelet my mother gave to me – as that’s what Dad told me – through its throat when its claws nearly raked gouged my eyes out. It was nasty, I don’t want to elaborate. When I told Dad about this, he told me to pack quickly. Without a question, I did so and we flew towards New York City with anxiety I promised myself not to experience in expectation of more monster attacks. But it was safe.

At the airport, Dad met an old buddy who turned out to be a satyr which nearly made me pass out. He told Dad that he'll have to stay in the satyr's apartment in Brooklyn but before he can go, I asked him that if my mother told him what to do, why didn't he take me to camp after I knew what I am and the deluxe - because he is too selfish to let me go away from him. The satyr tried to convince him but he was already convinced. So the satyr escorted me to camp where a cyclopes awaited me. In the car, he gave a dozen bronze set of my weapon of choice. I know how to deal with one-eyed baby. This time, I'm ready.

But apparently not quite. It dodged my weapons but small as they are, they weren't able to hit the eye until I only had one left. Its colossal wooden club is no match for my small knives. It swung its club which I was too tired to dodge, flung me to the side and I landed on full impact. I couldn't risk more my knife but I had to throw accurately even though my head was throbbing from the impact. My condition made it fail and hit its chest instead. The satyr wasn't quite of use for his legs were stuck by a boulder the cyclopes threw at him. And I thought this was the end and I never had the chance to say goodbye to Dad nor to Felicity. And when everything seems hopeless, the highlights of hope flutters.

I was able to quickly gain control and harness my new found powers which brought the defeat of the monster after retrieving a knife it threw away. Despite the small victory, I couldn't rejoice in thinking that that didn't approve Hecate's worth of claiming me. But when I fainted, that was the time when a swirling holographic cloud swirled above my head as strong arms began to carry me. Nothing turned out the way I expected it to be.

Weapon:
Payton has an innate skill with regards to darts, shurikens, stilettos and small throwing knives (main weapon) – a skill borne from boredness she often experiences. She founds favor among them with her deadly sharp aim. However, her main weapon is a whip.

15 is too old for the first attack (I'm assuming he's 15 when it happens, as you put he's 15 now, and the only attack I saw was the one right as he gets to camp). What is the cloud thing aroun his hea that carries him?

Actually, there were two attacks. I'm gonna fix the age then... nearly fifteen. Fourteen when attacked. Can I ask what age do monsters attack on children of lesser gods since I had not the slightest idea...

And the cloud thing, that's the symbol of her mom claiming her. And those were arms that were carrying her since she passed out.

How did the parents meet?

It's stated on the 4th paragraph. Better read the whole claim properly 'cause I had my own style =)

Maybe you stated this in the claim and I missed it but what exactly was this magical skill of Payton's father that impressed Apate so much?

I haven't and I already included that =) and it would be, of course, the magic of illusions which is why Payton thought her real mother was Hecate but it wouldn't be if she's claimed as Apate's child.

So when will this be claimed? Is this okay? Are there any more errors? I'm getting restless around here.

An untrained demigod wouldn't be able to kill a cyclops or throw knives so easily.

Well, actually, she can and able to since she trained herself how to throw darts and knives - a skill born out of complete boredom - unintentionally and just out of fun.

Check on it please?

Only a few small details:

Aren't darts those small little things you throw at a dart board?

Like the ones Mai uses in Avatar. So let's just make it throwing knives =)

Those are great long range or assassin type weapons, but you still need a primary weapon, you wouldn't use throwing knives to go against someone fighting with a sword.

This claim has been approved as a child of Apate. You now need to make a page for them and a word bubble, if you aren't sure how to do this you can see the guide here. Once you have done that you can add your character's name to the cabin list located on the cabin pages and start role playing with your new character. If you have any questions feel free to ask a member of the Admin team.

Retrieved from "https://camphalfbloodroleplay.fandom.com/wiki/Claiming:Camp/Payton_Freiretaille?oldid=1225832"
Community content is available under CC-BY-SA unless otherwise noted.