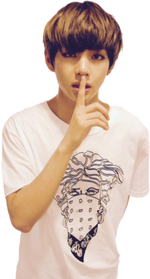 Personality: First and foremost, Pip's mental age doesn't correlate to the number of years he's existed. In a brief summary, he's quite immature and innocent with no real understanding of most human things. Compare him to a 7 year old - his sphere consists of him and maybe one or two people he's close to. When he's sad or mad he'll have a tantrum and won't talk to anyone until he gets what he wants in some form. WIP SO I CAN DO AN AMAZING ONE TBH

History: We all know Eris' favourite past time - cause some chaos and get multiple people either pissed off, killed or both. However, there obviously had to be some times where chaos wasn't created to the standard that she wanted. One of these incidents became the birth of a discord spirit by the name of Pip.

Sometime in Ancient Korea, there were two kingdoms who were constantly at states of war or unrest, each aspiring to marry into a more influential and powerful kingdom. This is why, when both royal couples gave birth to beautiful daughters, Eris got to work and created a golden apple with the words "for the one who'll marry a great prince." Now if we're being honest, the apple attracted the attention of the princess' parents who fought over who's daughter the apple belonged to. In all honesty, it seemed like an unforgivable war would break out due to the tension between the two kingdoms. As tensions rose to near breaking points, the beginning of Eris' plan began to take effect.

For the better half of a year, tensions rose and war broke out near three times, however to Eris, there wasn't enough chaos - she wanted to see a bloodthirsty war. To not only increase the tension but to intensify the chaos by adding in an actual 'prince,' she took the golden apple from one of the princess' chambers one night and from it created a discord spirit who she didn't even name. All she did was simply tell him that his goal was to act like the high prince and play each princess on and that he should only stop once the girls got angry enough to force their parents to declare war on the other. With his order set, the discord spirit went off to work and played each of the girls on.

At first, the spirit was successful, each girl getting extremely jealous when he was with the other and there were a few incidents where they asked their parents to declare some sort of conflicted against the other kingdom. However, as time went on his deceit masquerade became weaker and weaker until both of the princesses married off into much bigger kingdoms and Eris began to feel more and more angry towards the spirit. In her rage, she concealed his soul within the golden apple he was made from and kept it close to her, not letting him see daylight for the next 1900 or so years.

Now 2015 was arriving and the small part of Eris' heart that actually cared started to feel bad for the spirit and eventually brought him back into his spirit form. In all honesty, she was a bit shocked when she saw that the spirit was forgiving of her and developed somewhat of a fondness, going as far as to ask Athena and Mnemosyne to give him enough intelligence to make him as smart as roughly a seven-year-old so that when he was on Earth he wasn't completely incapable. Seeing her work as done, she sent him down to Camp, armed with a celestial bronze sword as a gift of sorts, where he promptly named himself Pip - seeing that it was fitting considering he was an apple for about 1900 years.

This claim has been approved as a Discord Spirit. You now need to make a page for them and a word bubble, if you aren't sure how to do this you can see the guide here. Once you have done that you can add your character's name to the cabin list located on the cabin pages and start role playing with your new character. If you have any questions feel free to ask a member of the Admin team.

Retrieved from "https://camphalfbloodroleplay.fandom.com/wiki/Claiming:Camp/Pip?oldid=1587153"
Community content is available under CC-BY-SA unless otherwise noted.