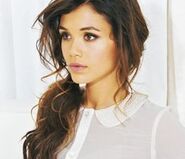 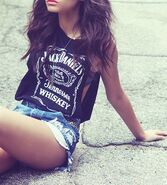 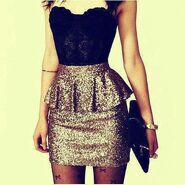 History: Candace "Candy" Riley met Dionysus at a beach party in New Jersey. Candy was intrigued by Dionysus, and Dionysus seduced Candy. The day after, Candy remembered Dionysus and wished to meet him again, but she never found him. A month later, Candy found out she was a single pregnant mother. Party after party, she stopped drinking and mingling at that time, Candy tried to find the father of her child.  After Reagan was born, Candy stopped searching. Candy tried her best raising Reagan, she even got a job as a CNA.  Since Candy was busy working throughout the day, Reagan was taken care of by her Nonna, Wanda.Wanda was a very superstitious woman. Hearing her Nonna talk about monsters, and how she could see them through the mist, Reagan began thinking her grandmother was psychotic. She tried telling her mom, but Candy refused to believe it.

Reagan had to suffer years of hearing her superstitious grandmother tell tales of Greek mythology, and beg Reagan to see them too. Finally, when reached the age she had to go to school, Reagan was happy to get away. At the age     of eleven, a disguised harpy attacked Reagan's  classroom. The school quickly called the police, but the harpy got away, not without taking one last whiff of Reagan. When Reagan turned fifteen, Candy threw her a surprise birthday party. Reagan's friends and family came, and celebrated her brithday with Reagan. Towards the end of the party, a hellhound shadow traveled inside Reagan's home, accompanied by a dracnae. One of Reagan's friends, Aurora who was a light nymph, appeared summoning two spear constructs of light and threw it at the pair of monsters. Candy didn't comprehend what she was seeing, and fainted. Aurora dragged Reagan by her hand, and togethor they fled her house. Finally when they arrived in New York, Reagan remembered about her mother. Reagan told Laurel that they needed to go back, but Aurora explained that Candy would be safer without Reagan near her. Reagan demanded answers, Aurora told her to wait till they get to Camp. Finally they reached Camp Half Blood's entrance, but before they got in, Aurora was killed by the same harpy from Reagan's childhood. The harpy tried to kill Reagan, but, the campers dragged Reagan inside the Camp. In rage of her friend, unknowingly, Reagan summoned grapevines which strangled the harpy to death. Reagan, due to her lack of practice of her powers, fainted. When she awoken, Reagan was devastated of her friend's death, still. A camper, explained what the camp is, and the gods of Olympus. He walked Reagan around, when they reached the Dionysus Cabin, a purple symbol of grapes hovered over Reagan's head, signifying that she is a daughter of Dionysus.

Personality: Reagan is an out going, flirty, party girl. She's very compassionate and isn't afraid to say what she thinks. Reagan is sassy and can sometimes be over confident. But over all, she's a sweet and fiesty girl.

I assume you haven't finished this.

How old is she when she reaches camp? And please sign your claim with the 4 ~'s so we know who you are >-<

okay i REALLY don't think a tree nymph can move around like that. bringing someone to camp. they can go very far from their tree or they die

@ riri: at 15, it says on her fifteenth birthday she had a surprise bday party people came, and left. Hellhound and dracnae appeared, Aurora came back and killed the pair of monsters, they fled to camp half blood. @ hydro: light nymph is a better one to use??? RubyRedAmazon (talk) 19:30, July 17, 2013 (UTC)

This claim has been approved as child of Dionysus. You now need to make a page for them and a word bubble, if you aren't sure how to do this you can see the guide here. Once you have done that you can add your character's name to the cabin list located on the cabin pages and start role playing with your new character. If you have any questions feel free to ask a member of the Admin team.

Retrieved from "https://camphalfbloodroleplay.fandom.com/wiki/Claiming:Camp/Reagan_Riley?oldid=1229371"
Community content is available under CC-BY-SA unless otherwise noted.