Age:16 when got moved over, still technically 16 (no years have passed) 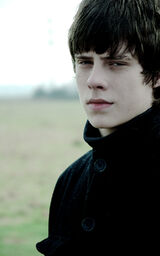 Personality: Rin is quieter, giving off a vibe of nonchalance. Most people assume he just doesn't care about anything, when in truth he cares too much. After losing everything, he is mostly sad, haunted by his emotions for his best friend, both in thoughts and dreams. He wears sunglasses (normally) as another barrier between himself and other people. Because he is in a new body, he feels slightly disjointed, and is clumsy at times.

History: Rin was 16 and in love. Unfortunately, it was with his best friend. Alison was probably the most amazing person for him, a complexity that, despite her own troubles, was always there for for him. When they'd met two years before, he knew he had a crush, but buried it. Like all good seeds,it bloomed and flourished, until he had a huge sunflower to deal with. It's not like he wanted to feel this way, he just wanted to be her friend. Life sucks sometimes that way. Rin had a few medical issues, one being an extremely weak heart. When he was about six he'd had to get a pacer in order to keep living. Because his first love emotions affected him so much, sometimes he would have "episodes" in which he'd go into cardiac arrest. It got so bad he had to live in the hospital for a while.

Rin honestly couldn't take it anymore. His love for Alison literally hurt him. He didn't want to tell her, one because he knew she didn't love him (only as a friend, she loved someone else.) Also, if she rejected him, it might actually kill him. Being skilled with the internet, he searched for a doctor to get rid of his feelings; anyone who could cure his love.

Eventually, he found Dr.Cummings, an underground doctor mechanic. Apparently, he used to lead a team in finding innovative cures until he was fired. Now, he gained profit via the underground world. Dr.Cummings promised to get rid of Rin's feelings, but with a cost; he would lose most of his feelings. What he was offering Rin, was a lobotomy.

Rin knew, no matter what, he had to do it. His parents were rich people who never really cared about him, so cost wise he wasn't worried. He knew this procedure would save his life. He accepted.

The procedure had been going okay, when all of a sudden, Rin went into cardiac arrest. Dr.Cummings had known of Rin's problem, but hadn't taken any measures to prevent it from affecting the surgery. Rin promptly died on the operation table. Guilty, with memories of his past in which a similar incident occurred, Dr.Cummings left the room to bring in T-47; the robot that looked like his dead son, who'd died 20 years before.

Dr.Cummings wasn't your average doctor; he was a son of Hephaestus. The robot he'd made was stronger than a human, but looks pretty much like a human. Hidden gears it had were knives that came out of it's wrists, and boosters in its feet. He'd made it to try and gain his son back, but it had never worked. This time, he was determined not to fail again.

Praying to hecate, he asked for her magic to bring Rin to the knew body. he knew there was no way Rin and Thanatos could have made it to hades just yet. Hecate responded in kind, answering his prayers, with a cost; the doctor would have to serve her purposes for 20 years.

And so, Rin lived again, no longer with the physical ailment of his heart. The love he felt for Alison, however, remained. He could never go back to his old life, he didn't even look like himself. Honestly, one could say he had an upgrade from his former body, but in truth, it was like he'd been reborn, and had lost who he was before.

The doctor sent him to the refuge of his youth; camp half blood. It was the only place he could think of that Rin could stay at. Arriving at camp, Rin found out something important; he could no longer cry. Maybe internally, but externally, he'd lost the ability. Two nights of no sleep made him realize further that he had lost that too. It seemed he;d lost everything except that in which he'd wanted to lose.

Note:He's only been at camp 5 days, and stays as a helper in the hephaestus cabin Weapons:knives in wrists (can extend to sword length) celestial bronze

I'm really unsure about this. It sounds plausible enough to me, but others might not agree. However, I think I'm correct in assuming that the soul transfer occurred within 20 minutes of medical death, and that Rin is not immortal?

OKIDOKI THEN. ANYONE HAVE PROBLEMS WITH THIS CAN YELL AT ME ABOUT IT.

This claim has been approved as an automaton. You now need to make a page for them and a word bubble, if you aren't sure how to do this you can see the guide here. Once you have done that you can add your character's name to the cabin list located on the cabin pages and start role playing with your new character. If you have any questions feel free to ask a member of the Admin team.

Retrieved from "https://camphalfbloodroleplay.fandom.com/wiki/Claiming:Camp/Rin?oldid=1787182"
Community content is available under CC-BY-SA unless otherwise noted.