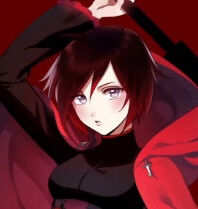 Personality:  Ruby's strong and fierce, just like her element of fire. She motivates others do keep going with her jolly personality and bright smiles. She cares for a lot of people but more so if you're her friend. Since her creator is Hephaestus, she has a soft spot for all of his children. Ruby isn't one for battle but is very capable of defending herself if needed.

History: In the early 21st century, 4 gods (Hephaestus, Bores, Demeter and Hades) made 4 nymphs. Completely unaware that the other gods where also making nymphs, they made then at exactly the same day and time. These four nymphs became mentally linked with each other.

The nymphs helped their parents a lot. Weiss helped her father, Boreas, in Canada, controlling the terrible weather. Ruby helped her father Hephaestus creating and smelting ores. Bara help her father, Hades, by shepherding the souls of the dead to the correct parts of the Underworld. Yalene would help her mother, Demeter, harvest the honey on Olympus.

After some years of this Weiss was sent by her creator to Camp Half Blood. She was sent here as Boreas was angry that there where no snow nymphs at Camp. Hephaestus sent Ruby to camp as there wasn't a lot of forging going on there. Her job was to motivate the Hephaesuts kids to make bigger, better things. Not just swords and shields. Bara was brought to camp to take care of the Hades kids. Hades was pretty concerned as a lot of them where getting into constant trouble and where making a mockery of his name. Yalene was sent here as the bees at camp where starting to die out. Demeter wanted Yalene to try and make them re-populate the area.

NOTE: This claim shares the same history with three other nymphs (namely Weiss, Bara and Yalene) since we (Gruff, Hyu, Raid and I) were originally going to make one big claim but chose to make separate claims instead.

Take your time.I've got forever to wait- Demi ღ

PLease add her to the photo album, nymph sanctuary, and user/character forum. Enjoy!

This claim has been approved as a fire nymph. You now need to make a page for them and a word bubble, if you aren't sure how to do this you can see the guide here. Once you have done that you can add your character's name to the cabin list located on the cabin pages and start role playing with your new character. If you have any questions feel free to ask a member of the Admin team.

Retrieved from "https://camphalfbloodroleplay.fandom.com/wiki/Claiming:Camp/Ruby?oldid=1234403"
Community content is available under CC-BY-SA unless otherwise noted.