Name: Ruby and Anna Nguyen (Ruby is the upper picture, Anna is the other one) 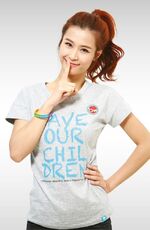 Age: Immortal (Have been alive for almost 70 years)

Personality: Anna and Ruby are twins, so they have almost identical personality. However, there is still some distinguishable differences:

Anna has a quite positive and bright personality, or at least brighter than her twin sister. She loves peace and always hate deaths, wars and discords. She is fun, happy most of the time and also energetic. She always sympathizes for other person and loves her sister a lot.

Ruby is a little different. She is happy and fun, but sometimes she is a little blue and sad, a little negative and gloomy, but this is not so often. However, when she uses her Mortiad's power or does her Mortiad's duty, she turns into a little darker person: she's cold, face looks depressed, blue and she's like the typical death nymph. However, she also loves peace, hates deaths, wars and discords like Anna, but not as much as her sister. She is very protective of her little sister.

Appearance: About 5'6", Anna had dark brown hair and brown eye, while Ruby had darker hair but she dyed it bright auburn/almost red and she had the same brown eyes. They both have fit bodies and they look like Asian woman (Vietnam, specifically). Ruby is older than Anna for about 1 minute.

History: After the First Indochina War, Hades struggled to deal with 794,000 souls wandering in the Underworld. The sudden increase of dead people made Hades headachy and tried to find a way to do the damage control. He then asked his daughter, Melinoe, to solve this problem. She suggested creating a new mortiad to manage the souls. Hades agreed, but before he could create one, a new war happened: The Vietnam War. The amount of souls was now 3 millions souls from the new war. These people were transfered to the Underworld. The place was full of dead people's soul. Hades couldn't just create one to control all of them. Melinoe suggested creating twins mortiads, one for each war. Hades immediately agreed. Hades and Melinoe combined their powers and created two twin mortiads: Ruby and Anna. Ruby appeared first, and then came Anna. Ruby slightly received more power from Melinoe which resulted in her double personality (like Melinoe's half white, half dark skin), Anna slightly received more power from Hades. Anna was in charge of the First Indochina War, Ruby was in charge of the Vietnam War because she was more mature. The girls did their jobs at day: Managing souls and guiding them to the Underworld. At night, they hung out together in the Underworld. Later, they played in Hades' castle and played with Persephone. Hades allowed them to do it because he wanted to be there and kept her companied while he was busy with Underworld work.

Persephone got along well with Anna and Ruby, to be honest, everyone did, because the sisters were so nice, unlike other cold mortiads. Persephone cherished them a lot. One day, she let them go to the mortal world and visit some interesting places. While they were hanging out, they saw a girl running from a harpy. Ruby and Anna quickly used their Shadow-Travel power to save the girl and take her out of there. Turned out, the girl was Felicia, Persephone's daughter. Persephone saw this and thanked them for saving her daughters. She loved them even more and treated the girls like her own daughters. She knew that they hated wars, that they were really nice and just want peace, didn't want to do anything with deaths. She'd love to take them to Camp Half-Blood, but their duty is not over yet. On a beautiful day, they finally finished their work. They hung out with Persephone more often, and she treated them like her own daughters. This actually made one of her real daughters, Melinoe, become envy and jealous of the twins. She created a monster from ectoplasm and ordered it to attack and kill those girls. The monster was so powerful that it cornered the twins and almost killed them. Fortunately, Persephone saw this and used her powers to easily destroy this herself. Knowing that if she let the girls stay here any longer, her daughter Melinoe would create more and more monsters to attack them. Even though she loved them a lot, she had to let them go to Camp, for the safety. Because their duties were done, Hades let his wife take the twins to Camp. She teleported them and lead them to the Camp, said goodbye and let them walk to the Camp, beginning a new life as a camper/Mortiad of camp. They used the surname Nguyen, as it is the most popular surname in Vietnam, and also it was a surname of one of their soul-friend in Underworld who died during Vietnam War.

This claim has been approved as Mortiads. You now need to make a page for them and a word bubble, if you aren't sure how to do this you can see the guide here. Once you have done that you can add your character's name to the cabin list located on the cabin pages and start role playing with your new character. If you have any questions feel free to ask a member of the Admin team.

Retrieved from "https://camphalfbloodroleplay.fandom.com/wiki/Claiming:Camp/Ruby_and_Anna_Nguyen?oldid=1554216"
Community content is available under CC-BY-SA unless otherwise noted.