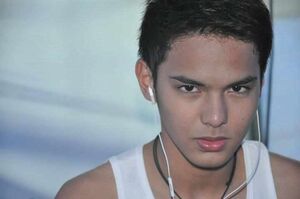 Sean is known to be a carefree individual, someone who can be called "happy-go-lucky". Because of that attitude of his, people called him by the name "Lucky" instead of Sean. He has this side who loved breaking the rules because he just loved the feeling of freedom and not being restricted with such regulations. When he gets caught, he just talks himself out of it. He can be a real pain in the neck for those people in authority especially the teachers in school but he didn't really care. All he wanted to do was have some fun. He also has a certain charm with the ladies which makes him easily capture their hearts although he never took any girl seriously because he didn't believe in "relationships".

Sean Torres used to be a "good boy" in his elementary years and everybody loved him, not only for his personality but his brains as well. It all began to change when his mother left home, making him believe that maybe having some "fun" was not so bad after all.

Valerie Sandoval was a party girl and got drunk every night, giving her parents headache and she would always receive midnight sermons but she never cared. One night as she walked down the streets, because her car ran out of gas, a mysterious man approached her and cornered her in an alleyway. Valerie did all her best to scream for help but the man was powerful and so he was successful in his attempts of sexual assault. Valerie never mentioned anything to her parents but after nine months, everything was revealed eventually and Sean came to the world.He was born in the Philippines.

Being a single, young mom, Valerie did whatever she could to provide the needs of her baby until a few years later, she found new love--Gregorio Torres. They got married and they took care of Sean together. Valerie was able to remove her bad habits and vices but like what they always say, "old habits die hard." She went back to drinking, smoking and partying which disappointed Gregorio, a decent entrepreneur. When Sean thought everything was doing okay in their family, his parents fought because of Valerie's irresponsibility until she could not handle it anymore and moved out, leaving Sean and Gregorio. Gregorio then decided to move to another country with his stepson to start a new life in America, particularly in New York.

At the age of eleven, a fire-breathing horse came after him just when he was about to go home. He got cornered and out of instinct, he blocked his face with his arms and a dome of hardened soil and diamonds just formed, giving the horse one hard hit on the head. When the monster was stumbling because of dizziness, someone came to the rescue and stabbed the monster until it disintegrated into golden dust. Just when Sean was about to look at who it was, the person was gone.

Through the years, Sean was able to develop a quick temper and a tendency to become violent when he did not like what was going on and everybody stayed away from him until he felt the loneliness. His stepfather would always give him advice about making friends and he would take them to heart in the hopes of finding his old self but it turned out that he became too friendly. Like his mother, he became a party-lover and had bad company when he entered high school so he would also go home drunk at night. His father would discipline him but would always say that his mother did the same so why couldn't he?

That went on until he was eighteen and he encountered yet another monster, a cyclops. Every attack he dodged until someone riding a winged horse arrived, along with a man with goat legs, and attacked the monster. The goat man threw him a black 8 spade card and instructed him to fold it. When he did, it turned into a celestial bronze long sword. Together, the three of them fought the monster until it disintegrated with Sean's stab. The guy jumped down the horse and revealed himself to actually be a woman. Her name was Celia and she had been travelling around the country with her best friend, Trevor, the satyr, to look for demigods who needed help. For years, Sean did not experience any other monster attacks since his first because Celia and Trevor always watched over him and attacked the monsters even before they touched Sean. But actually, at least two monster attacks should've killed him every year if it weren't for Celia and Trevor's help.

Age twelve, stymphalian birds came for him but Celia and Trevor already took care of them. When he was thirteen, harpies came to his house but again, Celia and Trevor killed the monster. A second attack came that year when telekhines snuck up on him but Celia stabbed them and got rid of them. Fourteen, empousai followed him but like always, Celia fought them for him. Then a chimera came a few months later before his birthday and the duo killed it. At the age of fifteen, a giant scorpion almost killed him while he was asleep but Celia was able to sneak up on the monster and stab it in the tummy where its weakness was then the day after, another one came but Trevor and Celia teamed up again to kill the monster. Sixteen, another fire-breathing horse came for him, and that time, there were two of them, which Celia and Trevor easily took care of. Seventeen, harpies again were about to attack him when Celia killed them first.

Trevor also explained that they didn't bring him to camp just yet because Celia pleaded not to. She saw that he was still having his own conflicts, which she understood and so she told Trevor to give him more time because if they were to arrive at his doorstep saying he's a demigod, that might overwhelm him and even turn him into a psycho or something. Not to mention, Celia was also the one who saved him from his very first monster attack.

After the chit-chat, Celia let Sean ride with her on her pegasus and since the transportation's already full, Trevor just told Celia to meet at the plaza right after she brings Sean to camp. When they finally arrived, Celia bid her farewell to travel once again and Sean was welcomed to camp.

Send a message to TheMysteriousLegendaryDragon

Hey ill be your claim checker today and i just want to say that this is a pretty well written claim but, there is still some things that need to be fixed.

For now thats it

About the parent thing, I didn't know I have to put that much detail. You know, it's possible that she was able to hide it like go somewhere else and then come back when the child was born...

I saw on chat that Alias said medium level monsters are allowed for Big Three kids so I guess I'll leave that one.

Does the savior really have to wait and talk to the demigod? Can't they be like the anonymous dudes who save the day? ._. and I did mention that Celia and her best friend was the one who always watched over him so I thought that would be implied...

"For years, Sean did not experience any other monster attacks since his first because Celia and Trevor always watched over him and attacked the monsters even before they touched Sean."

Send a message to TheMysteriousLegendaryDragon

This claim has been approved as a child of Hades. You now need to make a page for them and a word bubble, if you aren't sure how to do this you can see the guide here. Once you have done that you can add your character's name to the cabin list located on the cabin pages and start role playing with your new character. If you have any questions feel free to ask a member of the Admin team.

Retrieved from "https://camphalfbloodroleplay.fandom.com/wiki/Claiming:Camp/Sean_Torres?oldid=1554541"
Community content is available under CC-BY-SA unless otherwise noted.