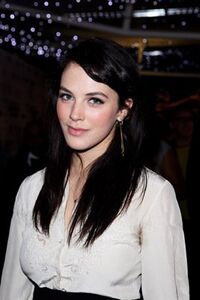 Personality: Silena is a quiet girl. She is nice and kind and standing next to her would probably make you feel peaceful and relaxed. She is a little bit romantic and loves enjoying the moonlight and looking at the moon, especially on full moon nights. She has a gift in writing poems, which she inherited from her father. She is sometimes a dreamy person: she dreams about her future, however, she always tries to make her dreams come true. She is also an adventurous and artistic person. She loves adventuring and exploring new places, but alone, without a company. She could be considered as a solitary person, but sometimes, she would like to have someone keep her companied. She is a normal student, her score is good enough to pass tests.

William Lonarus, whose pen name was Will L., was a famous poem with some notable poems and lived in Chicago. His main inspiration was the nature, especially the moon. It gave him peace in mind and the moon inspired him to write down his wonderful and meaningful poems. This obviously caught the eye of Pandia, the goddess of full moon. She transformed into a beautiful lady and disguised as Jasmine Arils. She met him when they bumped into each other. They were trying to find a perfect spot in the park to watch the moon. The two found a perfect spot and shared it together. Will and Jasmine spent the night talking to each other, and they found out they shared the same interest in moon and poems. Will took Jasmine home. He woke up the next day on his bed and couldn't find where Jasmine was. He felt sad that he couldn't find Jasmine, but they only had one night together and he didn't know her that well. He soon forgot about her, but then one day he heard someone knocking on his door. He opened it and saw Jasmine standing there, holding a basket. In the basket was a beautiful baby in a pink blanket. It was obvious that the baby was a girl, but the girl somehow looked a lot like William. Jasmine then told him the girl was his child. She explained to him about her real name, about the fact that Greek Mythology is real. He was shocked, of course. She gave him the baby girl, told him to take care of her well and gave him a beautiful pendant made from shiny silver moonstone. She told him to give to her. She quickly left. He ran after her, only to find her vanished into thin air. He came back to his home and continued a life, only now with a child whom he named Selina in his house.

William was a poet, so he constantly traveled to find inspiration to write poems. He traveled all the time, so he left Selina to his friends Anderson and Katherine Milanian. Unknown to William, Anderson was a moon spirit and Katherine was Nyx's daughter. They married but didn't have a child, so they were very happy when they had a chance to raise Selina. After a few months, William realized although he loved his daughter a lot, he got a job in Europe and it required a lot of travelling, so he agreed to let the couple adopt and raise Selina. Before he left for Europe, he decided to tell his friends the truth. They weren't shock, obviously, since both of them were related to the myth. He gave them the pendant to give it to Selina when they think it's the right time. They raised Selina well. She was an average student, good enough to pass tests. She was a good girl. She had ADHD and dyslexia. The symptoms appeared at the age of 3. As she grew older, she started to be interest in astrology, the zodiacs and the moon. She enjoyed the night sky a lot. Her interest was similar to her parents, so she was very close to them.

Her life was pretty normal until she was 11 and she had her first monster attack. She was in Katherine's car with her and they were on their way home from school. Two demigods on a car obviously caught the attention of nearby monsters. Katherine and Selina were on the car when a giant ant-like creature appeared in front of it. The giant ant-like creature was roughly the size of a minivan, including it legs for height. Its actual body though were more the size of a large motorcycle. Katherine, being a demigod, of course knew the monster was a Myrmeke. Katherine and Selina quickly got out of the car before the monster could have a chance to crush it. Since she was a trained demigod, she always had her celestial bronze sword, which disguised as a pocket watch. However, before she could kill it, the Myrmeke got a chance to attack Selina, who was unarmed, and made her pass out. Katherine easily slayed the creature and quickly took Selina to the hospital. Selina woke up in the hospital and asked Katherine what had happened. She lied to her and said they crashed their car on their way home. Thanks to this, Selina never knew about her first monster attack.

1 year later, she had her second monster encounter. She was on a camping trip with her father, Anderson. At night, they slept inside a tent. She couldn't sleep, so she took a walk. She walked around a cliff and enjoyed the view. Suddenly, she heard some noises behind her. She turned around and saw a horse with the size of colts. The horse were extremely dark grey, with the only contrasting feature on the beast being its red eyes. It breathed fire. She was frightened and tried to run. She started to become panic. Suddenly, each time she moved her hand, water came from the nearby lake and it splashed the horsed, the pressure was so strong that it pushed the horse down into the valley. At that moment, Anderson woke up because he heard something. He found his daughter, panicking and slaying a monster. He quickly turned into the state of pure moonlight, took his daughter's hand and flew back to their home. They arrived at their home, but Selina was still panicked. Anderson took her inside and told her to sit down. Then, Katherine and Anderson told Selina the truth, about her mother, hew powers. She was surprised and shocked, but she soon came to terms with the fact that she is a demigod.

After the second monster attack, Katherine and Anderson knew that if they let her go out and didn't train her, she'd easily be recognized by monsters and attacked by them. They decided to homeschool her, and keep her inside of the house, rarely let her go out. They trained her how to use swords and her moon-related powers. She could use swords and her powers in the most basic way. Any monsters that could smell her was killed by their parents easily, since both of them were trained. One time, a hellhound found Selina and appeared at her doorstep. Selina used her sword to kill it, but only when her adopted mother's friend Gwen (a daughter of Palaemon who took care of Selina when her parents were on a business trip) arrived was the monster killed. Gwen only babysat Selina once that time (her parents were away on a business trip) and she decided not to babysit Selina anymore because she knew if she did, she'd only attract more dangerousmmonster and that's not a good thing for Selina. 3 years later, after being trained correctly and dealing with some easy monsters, a satyr came to meet Selina and to take her to Camp Half-Blood. Her parents realized that it was time for her to go to camp. They figured that if they came with her, monsters would attack her, so they stayed. They said goodbye to their daughter, gave her the pendant and the two left for camp.

The two took a bus to Long Island. They almost arrived at camp if it hadn't been for their meeting with a harpy. They met the creature before they reached the borderline. The creature was depicted as winged women, with ugly face, and with the lower bodies of birds. Of course, the harpy was easily killed. I mean, a trained demigod and a satyr who happened to carry a sword with only one harpy? Piece of cake. Selina used the satyr's sword and attacked the harpy, wounded her wings and the minute the sword cut the monster, it immediately vanished and turn into dust. The satyr took Selina to camp and she is now officially a camper.

selina's mothers friend, Gwen, is she always around? Because if so then that would make 3 demigods in the same place plus a moon nmph dont you think that is a bit much? I understand if she was just there to baby sit that one time but pls make that

Hey Muse, so Gwen only babysat her that one time since Katherine and Anderson were on a business trip. She didn't do it after that because she thought it'd be dangerous for Selina. So no, she wasn't always around, in fact, she rarely was. I added that part.

This claim has been approved as a daughter of Pandia. You now need to make a page for them and a word bubble, if you aren't sure how to do this you can see the guide here. Once you have done that you can add your character's name to the cabin list located on the cabin pages and start role playing with your new character. If you have any questions feel free to ask a member of the Admin team.

Retrieved from "https://camphalfbloodroleplay.fandom.com/wiki/Claiming:Camp/Selina_Lonarus?oldid=1742660"
Community content is available under CC-BY-SA unless otherwise noted.