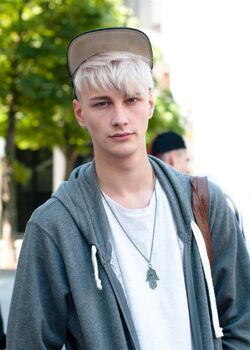 Appearance: He is 6'2" tall and weighs 112 kg. He has brown eyes and his hair is colored white. He sometimes dyes it in blue. He wears 2 gold earrings on each of his ears. He has thin straight eyebrows and always wears his poker expression.

Personality: Sid is a cocky and rebellious person. He doesn't have friends and doesn't even need one. He smokes a lot and does not pay any attention on what people say about him behind his back. Aside from his negative attitudes, he likes cold atmospheres and is known for multi-tasking or doing two things at the same time. Like reading a book on his left hand and writing something on his right.

History: 16 years ago, Edna stepped into college. There she met Michael (she doesn't know that he is Boreas) whose room is beside hers. He is always known for being the cold and mysterious guy in their campus. But, aside from him being cold, he is also known for being the most busiest guy in campus. Never talks to anyone but instead studies all by himself. He isn't that nerdy type of guy. Maybe he just does things like that. Edna isn't also the type of socialite. She herself is a self-declared nerd. When there was a party near her room, Michael asked Edna if she would come. She don't want to then shoved out Michael off in front of her room so she could study instead of partying till midnight. 4 hours past and still the party is crazy. She is disturbed by the noise since the party occurs on the room in front of hers. She decided to talk to the party host to lessen the noise since she is still studying. She was about to knock on the door when she saw that it isn't locked. She opened it and saw people making out, watching television, and eating messily. She saw Michael flirting with someone but she went to approach him since he's the only one she knows here since she isn't favorable with her room mate. Edna suddenly stopped to see Michael look very red and drunk. She insisted him to go back to his room. Fortunately, she was able to convince him and even helped him to get there. Once they got inside his room, Michael already made his move on Edna. Still not satisfied by his flirting with someone inside the party, he took advantage of Edna that night.

The next day when Edna woke up, she saw Michael beside her on her bed (they have two beds on the room) naked. She quickly got up, dressed herself up and then went home to her parent's house. The next days, Edna started showing symptoms of being pregnant. She stopped schooling since that incident because she doesn't want to see Michael again. She just work as a waitress on a certain restaurant where she met Nathan (who's a son of Dionysus). They became close since then until Edna gave birth to Sid. Sid lived a lonely life since no one wants to be friends with him. They always tease him that he has no father. In those days, Nathan stood up as his father temporarily. He was 7 years old when he first showed symptoms of having dyslexia and ADHD and so he was diagnosed later on with the company of Nathan since his mother has working shift that day. Whenever she is at work, Nathan tells stories to Sid mostly about Greek gods. Sid's first monster attack was when he was 11 years old. Every time he was on his way home from school, Nathan would be the one to fetch him. And so he was the one who saw a harpy chase Sid. He killed it with his celestial bronze sword. After that, Nathan was right about his guess that Sid is a demigod and so he explained everything to him including Camp Half-Blood.

From then on, Nathan secretly trains Sid swordplay using the Swiss knife he gave him which changes into a long CB sword. Sid asked Nathan to secretly train him for 6 years for him to be ready and he also wants to be with his mother much longer. Through those years, they survived minor monsters like hell hounds, harpies, etc thanks to Nathan but of course Sid beat most of them alone with no help at all. It was Friday in the evening, time for Edna to go home. It was also the time that Nathan was convinced to bring Sid to camp since he is now ready. He asked Sid to make a farewell letter to his mom before they leave the house. Stains of tears are visible on the letter Sid made for his mom. After that, they used Nathan's car to go to camp. On their way, they were attacked by a hell hound. Sid said that he would be the one who'll beat it himself and so he did. Nathan stopped the car before Sid got our of it. He charged directly at the monster, his sword on his right hand then he slashed its neck using it. They were able to go to camp and Sid got claimed that time.

Weapons: A Swiss knife Nathan gave him which changes into a long CB sword.

I'm not so sure about the colleges in America, but don't they separate rooms of girls and boys, even as far as placing them in separate dorms?Such is life~ lol.

Don't telekhines only attack in water for strategic purposes?Such is life~ lol.

This claim has been approved as a son of Boreas. You now need to make a page for them and a word bubble, if you aren't sure how to do this you can see the guide here. Once you have done that you can add your character's name to the cabin list located on the cabin pages and start role playing with your new character. If you have any questions feel free to ask a member of the Admin team.

Retrieved from "https://camphalfbloodroleplay.fandom.com/wiki/Claiming:Camp/Sid_Czar?oldid=1338900"
Community content is available under CC-BY-SA unless otherwise noted.