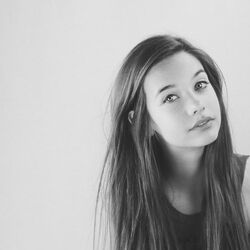 Personality: Summer is a hyper, fun loving girl. Shes very bright, she has a positive affect on everyone, and usually, doesn't do much bad. She only has a few friends, but she is always willing to make more.

History: Now usually demigods parents would meet, date and have an affair, correct? Not for this demigod. Iris did meet Jamie one day, and Jamie's friend Thomas set it up. They didn't date, they didn't talk, they just had an affair. Iris got pregnant and in the early morning, she woke Jamie up and told him. She gave him the address to camp, even if he lived in London, England, he would have to go to New York soon. 9 months following were hard on Jamie, he was confused, then during the 9th month, Summer came to his door in a basket and a card.

Summer Daily was the brightest girl in her grade. Always. She had friends, but she was bullied because, when she was 8 she was diagnosed with ADHD and Dyslexia. She didn't have a mom, so that made it worse. Her dad tried to be there and when she was 10, they shipped off to New York. She hated it there because the kids were rude. She was the only bright one there. She sat around usually, and wasn't very happy with her classes. She met a satyr at age 11. He was so sweet. His name was Drew.

At age 12, Summer was attacked when she was with Drew. Drew killed the harpies that attacked Summer. Drew told Summer. Everything. She decided to tell her dad when she was 14, and that's what she did. On her 14th birthday, she went downstairs and told her father. He told her who her mom was. Jamie brought Summer to camp and that's where she met a bunch of new friends and was given her favorite possession, her knife Star.

This claim has been approved as child of Iris. You now need to make a page for them and a word bubble, if you aren't sure how to do this you can see the guide here. Once you have done that you can add your character's name to the cabin list located on the cabin pages and start role playing with your new character. If you have any questions feel free to ask a member of the Admin team.

Retrieved from "https://camphalfbloodroleplay.fandom.com/wiki/Claiming:Camp/Summer_Daily?oldid=1226338"
Community content is available under CC-BY-SA unless otherwise noted.