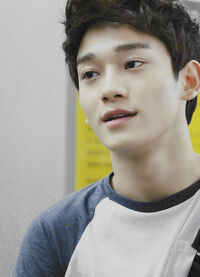 Personality: Taiga is cool and collected. Friendly, yet not too friendly. Sarcastic, but not to the point you want to punch him. WIP (I'm doing a basic overlook on his personality).

History: Hearing the story of Casey and Ella, anyone would have thought that Taiga would've been made long ago, and in fact, he would've been, if Ella hadn't taken Casey's sister's body. Once she had done that, she began to doubt if he loved her, which caused her love for him to deteriorate, meaning that there wasn't enough love for Taiga to be spawned from. As the century of them went on and the two of them mated with other people, it seemed their true love wouldn't return, despite the two of them loving each other deep down. It wasn't until they met at Camp did their love return to how it was. Although they've been reunited for a short amount of time, their strong love has been able to spawn Taiga.

This claim has been approved as an Erotios. You now need to make a page for them and a word bubble, if you aren't sure how to do this you can see the guide here. Once you have done that you can add your character's name to the cabin list located on the cabin pages and start role playing with your new character. If you have any questions feel free to ask a member of the Admin team.

Retrieved from "https://camphalfbloodroleplay.fandom.com/wiki/Claiming:Camp/Taiga?oldid=1336086"
Community content is available under CC-BY-SA unless otherwise noted.