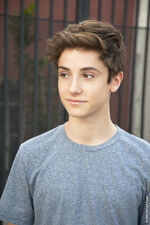 Personality:All-American teenage boy except he isn't one. He's a newborn nymph who was plopped down into Camp Half-Blood because Astrea regretted her decisions. Pretty friendly, normal, nice, but can be kind of a teaser when it comes to friends. Not that he's made any yet.

Created by Astrea as a representative and protector of the stars, Theodore came into being. Of course, having the attitude of a sixteen year old, he did not like his name. So everyone he met, he told them it was Teo and not Theodore. He made friends on Olympus with other nymphs that served their creators, but Teo was a bit of a troublemaker. He had served Astrea for five years until she had enough of him. Instead of placing him in Paris like she had originally planned, Astrea placed him into a camp full of rancorous teenagers. Luckily, this didn’t bother Teo too much. He wanted to make new friends anyway.

This claim has been approved as a star nymph. You now need to make a page for them and a word bubble, if you aren't sure how to do this you can see the guide here. Once you have done that you can add your character's name to the cabin list located on the cabin pages and start role playing with your new character. If you have any questions feel free to ask a member of the Admin team.

Retrieved from "https://camphalfbloodroleplay.fandom.com/wiki/Claiming:Camp/Teo?oldid=1612514"
Community content is available under CC-BY-SA unless otherwise noted.