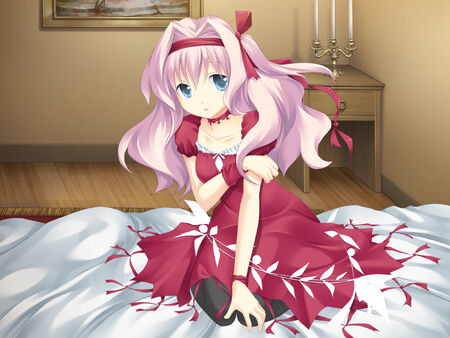 NOTE: She dyed her hair pink. Before it was naturally brown.

Personality: Tora is carefree and reckless in nature. She always picks a fight with one of her half-siblings or friends but is a really loyal and protective friend to have. Tora has a straightforward mind and often handles situations with a "hands on" approach. Tora can also hold grudges but they can pass by if something makes her change her mind about it/the person.

Tora always tries to show off her strength to others. She will pick the most random fights and will try to challenge the head counselor not for the spot but for fun and to show off. And even though Tora might loose in some fights, she never gives up no matter how hard the other person maybe. Due to Tora's reckless nature, she often destroys a lot of things she didn't plan of destroying and usually shrugs it off.

Tora also loves showing off her magic tricks (card tricks and all of that). She thinks she is not that great in it but actually, she's a lot better than the magicians who call themselves "magicians".

Parents meeting: Daichi Mori has always believed in psychics and magic. He was a renowned magician and loved the illusions and thinks of himself as a real person who knows magic. A young woman in a black cloak read his palms one day (he wanted to go to a psychic). After the reading, Daichi talked to the woman a bit and she revealed herself to be Yumi Suzuki, a well known psychic. Daichi and Yumi went out for a couple of months. One day, they decided to make love and that ended with Yumi getting pregnant. Yumi was never seen again, which broke Daichi's heart. A couple months after, on Daichi's front doorstep was a little girl in a basket. A long letter was written to Daichi and in the letter, Yumi explained who she really was. Yumi was actually Hecate, the Greek Goddess of witchcraft and magic. Daichi read the rest like how their child might get some monster attacks and even a map explaining how to get to camp half-blood. In the basket along with the baby was a crescent and star necklace from Hecate. She explained how it can turn into Dao Swords and etc... Daichi raised the child as his own and named her Tora.

Childhood: Tora's childhood was not that fun but it wasn't that bad. Tora was your average everyday kid and she had many friends. She went to a middle school that also had a high school attached to it. Tora was very popular and friendly to everybody. She is very loyal to her friends and was often marked as a delinquent (because she often picked fights with a lot of people who hated her or who she hated). Other than that, Daichi taught Tora many magic tricks and how to be the best illusionist in the world.

Monster attack: Tora was only 13 when her first monster attack came. She and her father were playing outside in a park when a hellhound attacked. Being a clear sighted mortal, Daichi tackled Tora so she wouldn't get hurt. Luckily, they both didn't get hurt by the hellhound. Daichi told Tora to yank off her necklace and Tora did. The necklace turned into dual broadswords for Tora to use to fight against the hellhound. Tora fought against it and it disintegrated. Daichi and Tora never spoke of the incident after it happened. When she was 14 though, she was lucky not to get another monster attack.

When Tora turned 15, another monster attack came and this time, Tora was alone. Tora was walking home and it was dark. A harpy saw Tora and attacked her. Frightened, Tora ran away from it, but it just chased on after her. Tora then stopped running since she knew that it was not the solution to her problem. So she fought the harpy and got a couple of cuts and bruises. After sometime, the harpy disintegrated and Tora ran as fast as she could back home. Tora told her father she couldn't take this monster stuff any more and demanded an explanation on why they are all attacking her. Daichi then told Tora everything from how her mother is Hecate and how Tora is a demigod and where her necklace came from. Daichi also told her it is about time for her to go the special camp that was built just for kids like her. Tora refused to go to the camp. She didn't want to leave her father but he explained that he'll be alright. Tora packed her things and went into the car with her father who drove her to the camp using the directions Hecate wrote down for him on the map. They drove down to camp and luckily, they got no monster attacks. When they arrived to their destination, Tora hugged her father for what maybe the last time she might see him. Tora then walked into camp when her father drove away. Once she stepped in, she got claimed as a daughter of Hecate and was welcomed to camp with opens arms from every direction. From that moment on, Tora has been at camp ever since.

I know i already have a claim made, but that has been put on hold.

By clear sighted mortal, do you mean he can see through the mist?Such is life~ lol.

This claim has been approved as daughter of Hecate. You now need to make a page for them and a word bubble, if you aren't sure how to do this you can see the guide here. Once you have done that you can add your character's name to the cabin list located on the cabin pages and start role playing with your new character. If you have any questions feel free to ask a member of the Admin team.

Retrieved from "https://camphalfbloodroleplay.fandom.com/wiki/Claiming:Camp/Tora_Mori?oldid=1304398"
Community content is available under CC-BY-SA unless otherwise noted.