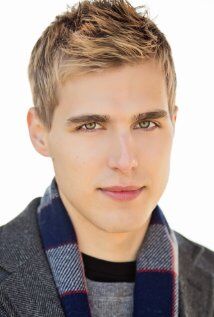 Personality: While wildly creative, Tyler had a bit of a challenge wrangling this creativity, occasionally getting kicked out of schools for doing impromptu murals on school walls. He's willing to try new things and highly active. Preferred Weapon: Sica; while it's more of a Roman Design, Tyler likes the angled blade. When it's not in 'weapon mode' the Mist makes it appear as a curved ruler.

Parents meeting: Being a studio artist was never easy for Rosso, especially when he had college loans to pay off despite being out of school for a few years now. Working in paint was easy in Florida since it'd dry faster in the heat, but selling his paintings was the hard part. He'd be able to make rent on time buy selling them online, but he lucked out when a gallery finally accepted to show his work. It was at this event that he met a visitor to the gallery and the two of them began to talk art, color, and other aspects of his work. This slowly led to him and the god building a relationship based on their appreciation of art. Rosso's work began to sell better as he received pointers from the god as they sat side-by-side in his studio. A connection that was deeper than their love for art was formed over time. Eventually, sparks flew and paint was tossed, leading to the birth of Tyler. Growing Up: Being the son of a studio artist, Tyler quickly learned his colors and shapes, and in elementary school, he'd always bring home a drawing for his parent that he did that day in school..that is until he was seven and decided that an 8 by 11 sheet of paper wasn't going to cut it and painted an impromptu mural with bright colors on a school wall. This led to his first suspension from school. While the school admitted it was skilled for a kid his age, they still painted back over it with a bland white, breaking Tyler's heart. It was his second one at age 10 that got him expelled. At his next school, Tyler tried to control his urge to work with colors, even pressing himself to do sports. While he was good at a few sports, colors and art still remained his primary focus, doing art for rec centers to avoid painting school walls again. Intro Into the World of Myths: Tyler honestly didn't mean to paint that table in class. He just kind of zoned out in the middle of art class by the time his teacher snapped him out of it, the table was covered in a landscape. Nothing he said could get him out of detention. It had been his first detention that year at age 12. His history teacher Mrs. Jaqueal was in charge of detention that night. Tyler was never really a huge fan of Mrs. Jaqueal; her sharp, active eyes that looked through you and the way she drug out her 's' sounds got under his skin. It was just Tyler and Mrs. Jaqueal in the room, which Tyler found odd since when he had been in detention before, there were at least five other kids. It didn't take long for Tyler to find out why he was alone in detention though, Mrs. Jaqueal made it a priority to reveal his Dracanae form and chase Tyler out into the hall. Unsure of what was going on all Tyler did was run, in hopes outrunning her. It wasn't until he turned a sharp corner and looked back did he see the school janitor, Mr. Bleester, had impaled Mrs. Jaqueal on his metal-tipped mop before the history teacher disintegrated to yellow dust. Mr. Bleester revealed himself to be a satry and explained to Tyler about how the Greek myths were real, that Mrs. Jaqueal was really a Scythian Dracanae, and that one of his parents was a god. Escorted home by Mr. Bleester, Tyler's father confirmed the story as Tyler packed for the closest safe haven for Demigods, Camp Half-Blood.

Before I get into the nity-gritty of the claim checking, I'm gonna ask you to please make the history a bit longer o.o you can go more in-depth with things. You should go more into detail about how the history teacher tried to off him: What monster was it, and how did he react, how did the satyr save him?

Also, I would move the portion where you are explaining how their parents met to the top of the history in more chronological order... it just seems to be out of place there...

Lastly, please say how old he was when all this stuff happened so we can get a better idea of what his life has been like.

It would take much more than a single stab to kill a lycanthrope, and the metal woud have to be sterling silver which isn't used by anyone other than Artemis' Huntresses. At that, no he would not be able to outrun a lycanthrope. Simply saying "looking back he wasn't sure how he outran it" is not enough to dismiss that. For these reasons, a Lycanthrope is a medium monster. Please look at this: Forum:The Monster Encyclopedia for a list of Easy monsters that can be used in claims.

This claim has been approved as a son of Iris. You now need to make a page for them and a word bubble, if you aren't sure how to do this you can see the guide here. Once you have done that you can add your character's name to the cabin list located on the cabin pages and start role playing with your new character. If you have any questions feel free to ask a member of the Admin team.

Retrieved from "https://camphalfbloodroleplay.fandom.com/wiki/Claiming:Camp/Tyler_Young?oldid=1514890"
Community content is available under CC-BY-SA unless otherwise noted.